2National Center for Cardiology and Therapy named after M.M.Mirrakhimov

In this article, the results of 3-year research program on primary diagnostics of congenital heart defects in children < 1 year of age are presented.

The congenital heart diseases (CHD) are defined as proposed by Mitchell et al: “a gross structural abnormality of the heart or intrathoracic great vessels that is actually or potentially of functional significance” (1). The frequency of CHD at birth (sometimes referred to as the prevalence per childbirth) depends on how the population is studied (2). According to the World Health Organization (WHO), 1.35 million newborns with CHD are born each year (3).

When examining newborns using the echocardiography, small defects (small defects of the interventricular and interatrial septa, small sized patent ductus arteriosus (PDA)) predominate. With the inclusion of all forms of CHD into study, the prevalence of CHD, according to Hoffman and Kaplan (4) can reach 75 cases per 1000 live births. Performing an echocardiogram in all newborns revealed that about 5% have small ventricular septal defects, most of which spontaneously close for up to a year. Vast majority of newborns have delayed closure of the PDA (4). In 90% of cases CHDs are found in general populations without any particular risk factor, and only in 10% of cases CHD is associated with certain risk factors (5).

Early detection of CHD and timely cardiac surgery is essential for prognosis in children with heart defects. The total mortality from CHD without intervention is sufficiently high. Usually, in most low- and middle-income countries, the diagnosis of CHD is considerably delayed (6). The average age of the primary diagnosis establishment can vary from the first day of life to almost 80 years (7).

A previous study of CHD in Kyrgyz Republic territory showed that only 14% of children had been diagnosed before discharge from the maternity hospital, and 86% of patients had a delayed diagnosis (8).

1.            To assess the significance of contribution of various risk factors in complex CHD formation in intrauterine period

3.            To determine the causes of disability and early mortality in adults with CHD.

The study was conducted in all territories of the Kyrgyz Republic (KR), in the high-altitude, mid-altitude and low-altitude regions, including the most remote areas (Table 1). The researchers organized more than 60 on-site evaluation of the local population.

The population of the country, according to the National Statistics Committee, is 6.4 million citizens. The average annual birth rate in the country over the past three years is 158.160 thousand annually.

The research study was conducted by two sections: prenatal diagnostics and workup of newborns and children under 1 year

I. Prenatal diagnostics: Prenatal echocardiography is the most valuable method for the diagnosis of fetal heart disease. As a non-invasive and innocuous procedure, it allows examiner to fully evaluate cardiac structures, assess intracardiac hemodynamics in the prenatal period and makes it available for dynamic control during pregnancy. All these qualities determine the priority of this method in the prenatal diagnosis of fetal congenital heart disease.

A standard fetal cardiac scan is carried out at 18-22 weeks of gestation in accordance with the protocol of the reference centers (5).

We started examinations of pregnant women from the 21st week of gestation, which was explained by the first visits of women to our center. 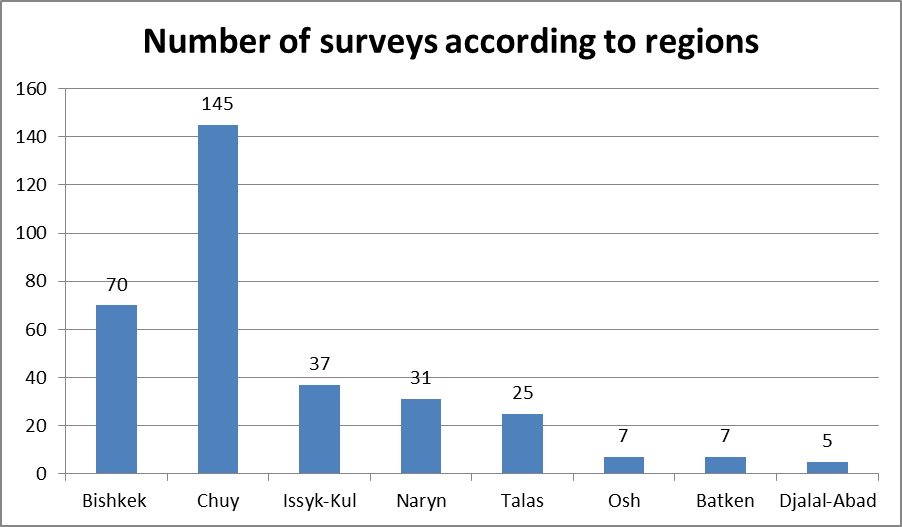 II. Primary workup of CHD in newborns and children under 1 year:

The study included newborns and children under 1 year old in the investigated area. The presence of a structural anomaly of the heart was regarded as the presence of CHD. Patients with congenital rhythm disturbances, cardiomyopathy, myocarditis, additional persistent vena cava, patent foramen ovale, acquired valvular heart disease were excluded.

A total of 4177 patients were examined, 523 had a primary diagnosis of congenital heart disease, which was 12.52%. 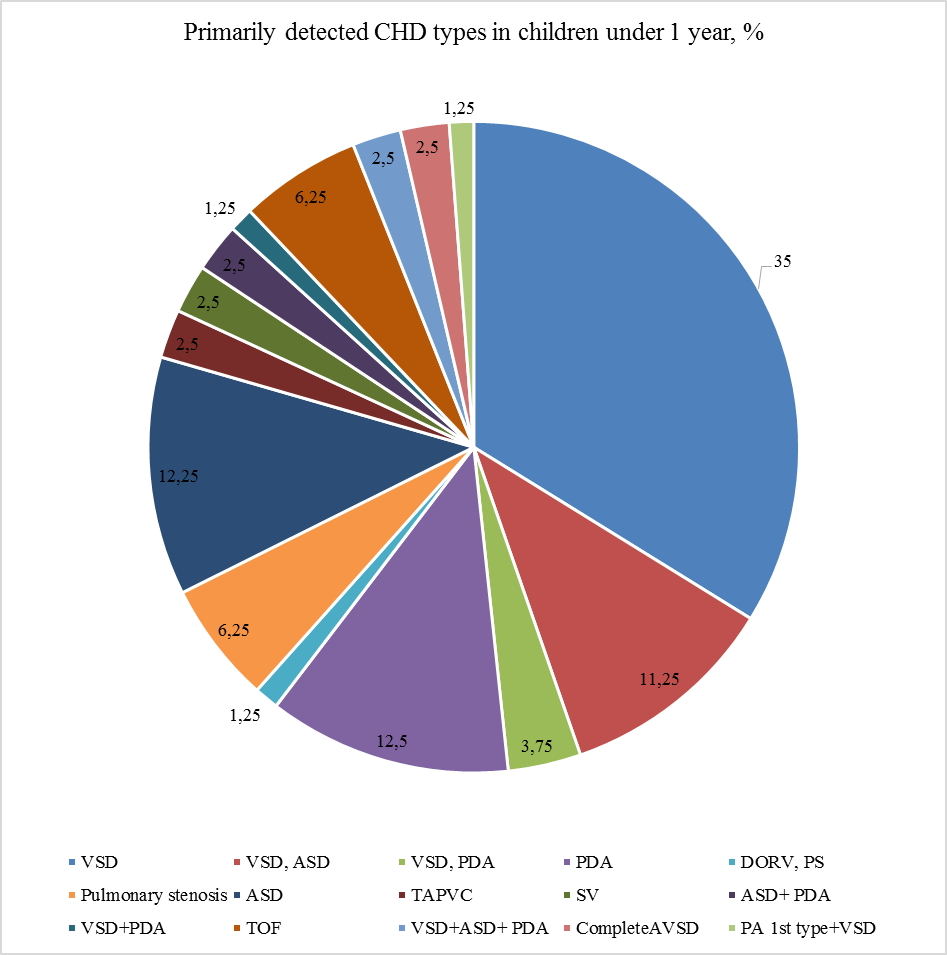 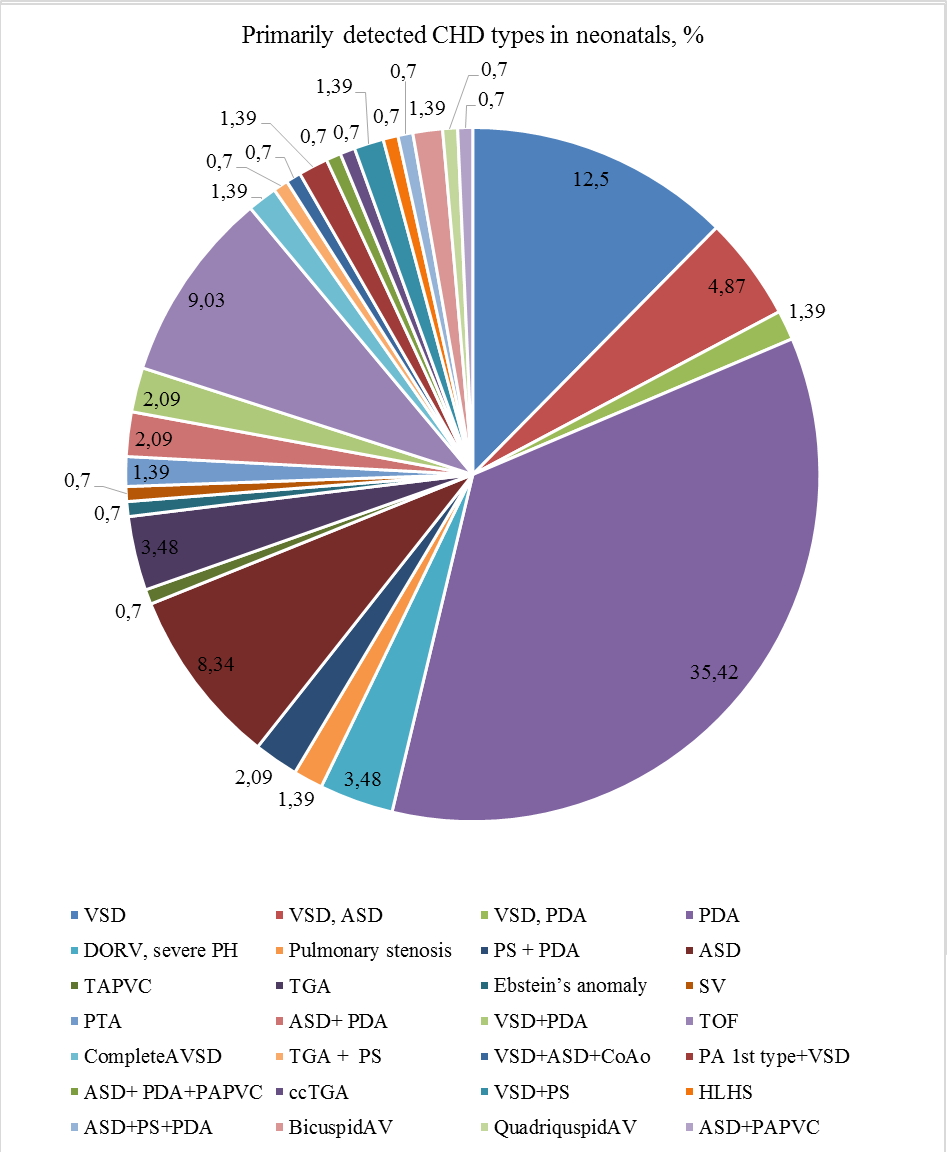 According to European authors, only 49% of pregnancies in Europe are planned. On the territory of our country, the exact data of the planned pregnancies is unknown, but according to a preliminary survey of the women examined, only 5% of the pregnancies were planned. The program was implemented with a focus on women with CHD in history. Only 21% of the examined pregnant women were at risk of having children with CHD.

The accessibility of the study is the highest in the Chuy region and the capital of the country - Bishkek, that is, in areas located in close proximity to the central institution, and it is probably higher due to the internal migration, because the registration address during the survey have not been supplied.

The influence of high-altitude has not been revealed as a causative factor, which corresponds to the international data obtained in different years and in different altitudes (9-12).

Based on the obtained results, the most common forms of CHD (in children under 1 year old and newborn babies) in our country are “acyanotic” heart defects, such as the patent ductus arteriosus (12.5% and 35.42%), atrial septal defect (11.25% and 8.34%), ventricular septal defect (32% and 12%) and their combinations. On the other hand, assessment of newborns and the children under 1 year reveals the high prevalence of critical and complex forms of CHD requiring well-qualified care and timely surgical treatment. The proportion of detection of cyanotic defects is significantly reduced with age, which also correlates with international data that more than half of children born with cyanotic CHD do not live up to 1 year.

The main causes of disability and early mortality in vast majority of patients with CHD in remote regions of Kyrgyz Republic are late detection, lack of accessible specialized medical care, and low awareness of the parents/relatives of the patient about the importance of timely surgical treatment.