Since more than a half century, cardiac pacing and defibrillation represent a field in constant evolution, and they have shown some great technological advances from its conception to its methods of insertion.

In this review, the recent developments about the accesses for pacemakers and ICD will be described: the axillary and the femoral vein. The His bundle pacing and the advantages of the entirely subcutaneous defibrillator will also be presented.

Since the first pacing system implanted in 1958 by Lillehei (University of Minnesota), cardiac pacing has emerged as a field in constant evolution, from its conception to its methods of insertion. Cardiac defibrillation also underwent some great technological advances in a relatively short period of time, since the first implantable cardioverter defibrillator (ICD) implantation in 1980, and the first biventricular pacing report in 1994.

In this review, the recent developments about the new venous access for pacemakers and ICD will be described: the axillary and the femoral vein. The His bundle pacing and the advantages of the entirely subcutaneous defibrillator will also be presented.

Several anatomical access points and methods to gain central venous access have been described. The axillary, cephalic, and subclavian veins, as well as the internal and external jugular veins, have all been used to insert pacemaker or ICD leads.

The axillary vein has become an emerging technique for several reasons. Unlike the cephalic vein, the main advantage of the axillary vein is that it is almost always large enough to accommodate multiple pacing leads. When compared to the subclavian vein, the properly-accessed axillary vein affords a less angulated course (Fig. 1). This potentially decreases the mechanical stress (subclavian crushing syndrome) on the implanted leads or catheters, hence resulting in a lower incidence of mechanical lead failure or vein occlusion  (1,2).

Techniques for accessing the axillary system use fluoroscopy (either with or without venography), but ultrasound imaging has also been used (3-5).

The landmark (fluoroscopy) approach is associated with a potential risk of arterial puncture, pneumothorax or failed access, but also a higher exposure to radiation, in comparison with ultrasound guidance  (6, 7).

In our department, ultrasound-guided axillary vein puncture (UGVP) is being routinely used for single and dual-chamber devices, but also for cardiac resynchronization therapy (CRT) and upgrade procedures (8). Overall, 180 patients have been implanted using UGVP, which was successful in 94.2 % of the cases with a mean 4.0 ± 3.3 min for a mean number of 2.67 guidewires per patient. Guidewire insertion time reached a plateau after ten patients, defining the learning curve for this technique.

Despite the advances in conventional cardiac pacing implantation techniques, early complications may reach 12.4% in the first two months after implantation (9).The FOLLOW-PACE study was a prospective cohort study including 1517 patients in 23 Dutch centers, and complications (mostly lead-related) accounted for 9.2% of the patients during a mean follow-up of 5.8 years. To overcome these difficulties, a new leadless (fully self-contained) pacemaker technology has been developed and is inserted via the femoral vein. The LEADLESS II Trial evaluated the early performances of the Nanostim™ LP (Abbott Medical), with 95.8% of successful implantation (504 out of 526 patients), and a primary safety endpoint met in 93.3%  (10). Device-related serious events were reported at six months in 6.7% (device dislodgement 1.7%, cardiac perforation 1.3% and pacing-threshold elevation 1.3%) of the patients. This study was immediately followed by another one concerning the Micra Transcatheter pacing system (Medtronic, Minneapolis, Minnesota, USA), and included 725 patients with successful implantation in 719 (99.2%). Twenty-eight major complications were reported (without any dislodgement), but were significantly less than the control group (11). The long-term performance results were very encouraging with a freedom from major complication rate of 96% at 12 months. Electrical performance was excellent after 24 months, with a projected battery longevity of 12.1 years  (12). 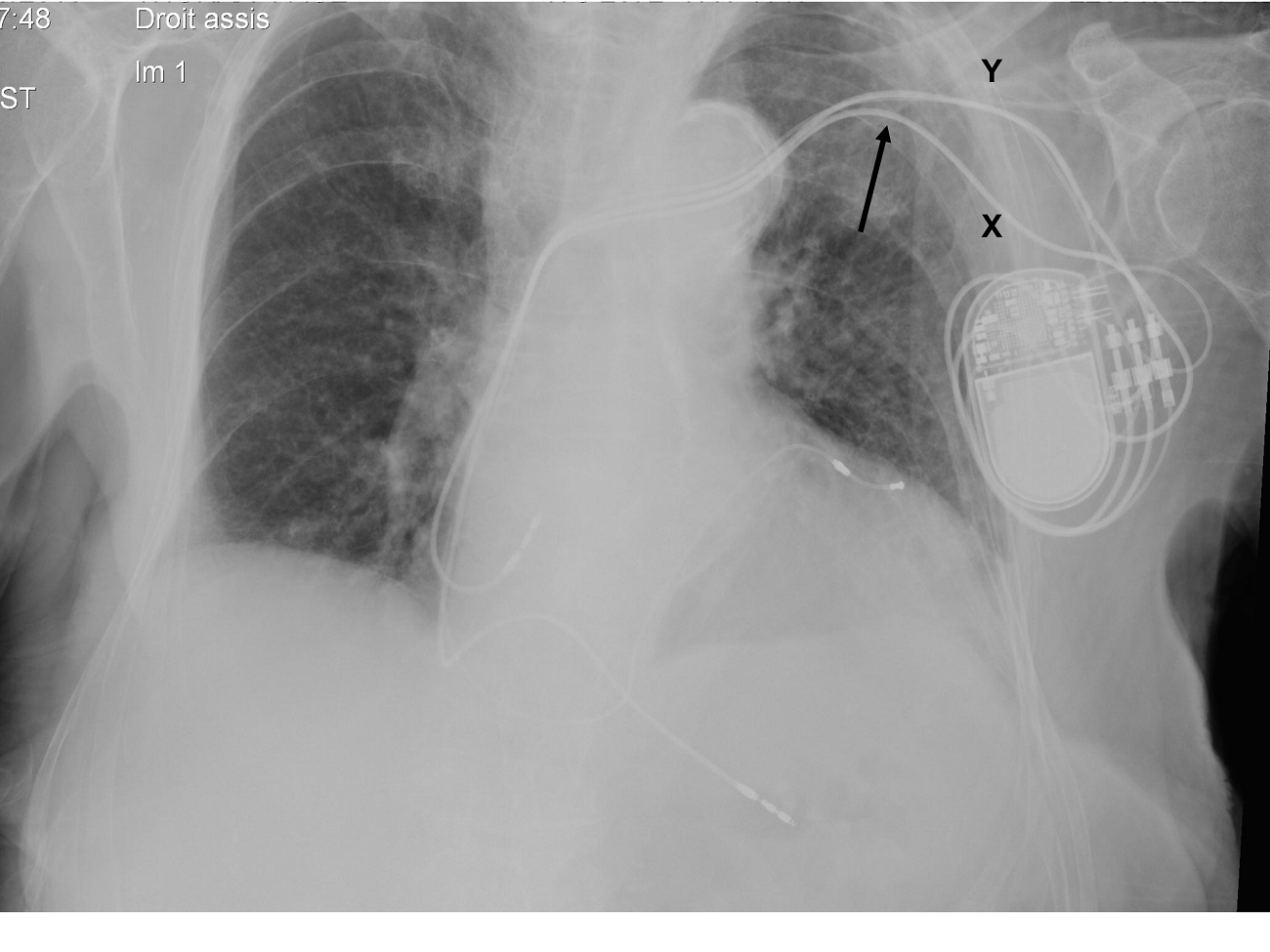 Figure 1. Fluoroscopic image of a patient initially implanted with a dual-chamber pacemaker using subclavian vein puncture (X), who benefited from an upgrade (coronary sinus lead), now with ultrasound-guided axillary vein puncture (Y). The angulation and potential mechanical stress on the leads are significantly marked with the subclavian access (arrow). 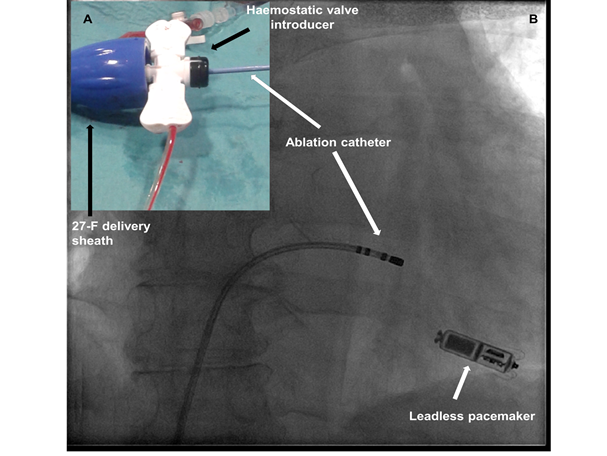 The patient underwent a successful leadless pacemaker implantation (Micra™ TPS, Medtronic), after ultrasound-guided right femoral venous puncture (14). AVN ablation was immediately performed using the same femoral delivery sheath (Fig. 2, right image B). Noticeably, there was a significant blood leak from the steerable sheath due to the incongruent sizes between the 7-F RF catheter (Celsius Thermocool™, Biosense Webster) and the 27-F steerable delivery sheath. In order to avoid excessive bleeding, a haemostatic valved (SafeSheath™) introducer was needed for inserting the RF catheter within the sheath (Fig. 2, left panel A).

Of note, leadless pacemakers are also capable of rate adaptive pacing (15). In the near future, many questions will need to be answered concerning this promising technology, such as the management of end-of life batteries: retrieving it or adding new battery  (16, 17)?

For more than fifty years, the classical approach for cardiac pacing was to implant the endovenous pacing lead at the right ventricular apex. Nevertheless, this location induces a non-physiological pattern of ventricular activation and has been demonstrated to induce in a significant number of cases a pacing-induced cardiomyopathy  (18). Actually, left ventricular ejection fraction (LVEF) may be reduced by 2% at 2 years of follow-up in patients with right ventricular apical or septal pacing without initial systolic dysfunction  (19). A research for more physiological cardiac pacing was performed with attempts at selective pacing of the His-bundle nearly fifty years ago (20). First authors to report their experience with permanent His-bundle pacing (HBP) were Deshmukh et al in 2000  (21). Since that date, the number of publications and works has constantly evolved, and there is no doubt that HBP will emerge as the most dominant technique for permanent cardiac pacing.   Recently, some recommendations have been published concerning the implantation procedure and follow-up of HBP (22). Programming the devices has some specificities also when performing HBP (23). In one of the latest reviews,  (24) current indications include atrioventricular block, sinus node disease, AVN ablation (Fig. 3), (25) infranodal block, CRT  (26) and ICD. Until now, 26 original articles report 20 years of experience with HBP, from 1438 patients around the world. HBP was recently integrated into the last Heart Rhythm Society Guidelines for cardiac pacing in 2018   (27). Actually, HBP is an accepted alternative to CRT in patients with atrioventricular block who have an indication for permanent pacing with a LVEF between 36 and 50%, and are expected to require ventricular pacing for more than 40% of the time (class IIA, level of evidence B).

A specific 5-F active fixation lead is commonly being used (Select Secure 3830, Medtronic, Minneapolis, Minnesota, USA), in combination with a 7-F dedicated delivery sheath, either fixed or steerable (C315 His Catheter, Medtronic, Minneapolis, Minnesota, USA)  (28). At the beginning of the experience, some authors reported the need for localizing the His bundle using a deflectable decapolar electrophysiology catheter, but this additional material was not needed in our experience  (29).

If favorable results are confirmed in the near future concerning the outcome with HBP, we think that this technique may be a cost-effective alternative solution for cardiac resynchronization therapy (CRT) candidates in developing countries, because offering an efficient pacing solution with a dual-chamber pacemaker only, and without the need for using a coronary sinus (CS) lead, a dedicated CS delivery sheath, as well as contrast agent injection.

In case of difficult superior access for CS, it has been reported the possibility to catheterize it from the femoral vein using an electrophysiology catheter. The advantages of this technique may be double. It can be used as a landmark if the CS ostium is very difficult to visualize, in case of significantly enlarged right atrium for instance. The other advantage is the possibility to overcome the presence of a Thebesian valve at its ostium  (30).

In case of renal failure, we also suggested the possibility to catheterize the CS without contrast injection  (31). In this study, 17 consecutive patients were included (mean glomerular filtration rate 33 ± 15 mL/min/1.73 m²). Resynchronization was feasible in 16/17 patients (94.1%) without contrast injection. The mean CS lead implantation time was 36 ± 19 min, without significant difference with a control group including 25 patients without renal insufficiency. 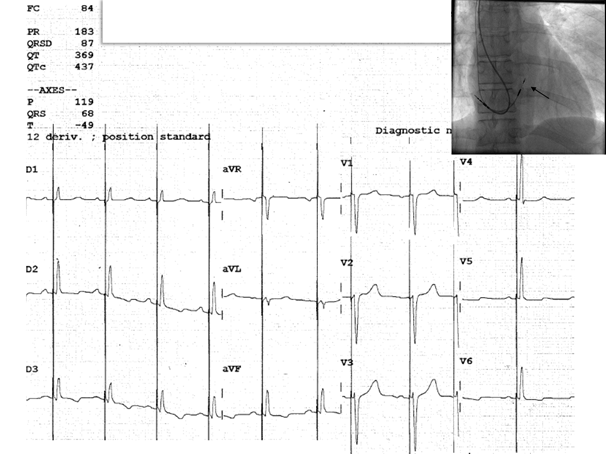 It is well known that one of the major drawbacks of the ICD is the presence of an endovenous lead, with a subsequent risk of fracture, or a potential risk for infection. When indicated, the extraction of endovenous leads is associated with a significant risk of morbidity, and even mortality. To overcome these difficulties, an entirely subcutaneous ICD (S-ICD) has been designed (Emblem™, Boston Scientific). These devices have the advantages to avoid any risk of device-related endocarditis, and all the problems inherent to the presence of an endovenous lead. The main disadvantage is the current impossibility to deliver Anti-Tachycardia-Pacing (ATP), and long-term conventional pacing. Nevertheless, these systems will be coupled with leadless pacemakers in the near future to overcome this specific, but important issue  (32).

In the 2015 European Society of Cardiology guidelines, S-ICD should be considered as an alternative to conventional transvenous ICD, when pacing therapy for bradycardia support, CRT or ATP is not needed (Class IIA, level of evidence C)  (33).

This technology may be proposed to young patients facing a lifetime of device therapy, and/or in cases of difficult venous access. The EFFORTLESS Registry included 882 patients, and device-related complications occurred in 11.1% of the patients at 3 years (34). The estimated 3-year inappropriate shock rate was 13.1%. 98.2% of the ventricular events were terminated within the 5 available shocks. There were no electrodes failures and no S-ICD-related bacteriemia occurred. Only three devices (0.3%) had to be replaced for right ventricular pacing.

From a technical point of view, it is still recommended for operators to perform a defibrillation testing with S-ICD. The ICD can is placed in the left anterior axillary region, and connected to a lead which will be subcutaneously tunneled vertically on the (left or right) lateral border of the sternum. The device may deliver a high-energy shock with an output of 80 J. The lead is composed by three electrodes: a distal sensing electrode at the tip, a proximal sensing electrode placed under the xyphoïd process, and a shocking electrode located between the two sensing electrodes. The technique is a two or three-incisions implantation procedure (Fig. 4), usually performed under general anesthesia, but some operators reported their experience with deep sedation (35).

The wearable cardioverter defibrillator is an external defibrillator (including leads and electrode pads) attached to a wearable vest. In France, the reimbursement of this vest has been validated in the post-myocardial infarction period (one month) with LVEF < 30%, or in case of ICD extraction, before endovenous reimplantation, and as a bridge for heart transplantation. It is a class IIB indication (level of evidence C) in the 2015 European Society of Cardiology guidelines in adult patients with poor LV function during a limited period of time (bridge to transplant or transvenous implant, peripartum cardiomyopathy, active myocarditis, and arrhythmias in the early post-myocardial infarction phase). Chung MK et al. reported that 80 sustained ventricular tachycardia (VT) or ventricular fibrillation (VF) events occurred in 59 of 3569 (1.7%) patients wearing the wearable defibrillator (36). The first shock was successful in 76 of 76 (100%) patients with unconscious VT or VF and 79 of 80 (99%) with any VT or VF. The VEST Trial included 2302 patients with acute myocardial infarction, and LVEF below 35%. They were randomly (2 :1) assigned to the device group for 1524 and 778 in the control group (37). Arrhythmic death occurred in 1.6% of the participants in the device group versus 2.4% in the control group (p = 0.15). So, the study failed to demonstrate that the wearable defibrillator was able to significantly lower the rate of the primary outcome of arrhythmic death.

Technological advances are considerable in the field of cardiac pacing and defibrillation, from the latest venous accesses for implantation, to recent locations for permanent pacing (His bundle pacing), or non-endovenous ICD. Imagination of researchers and device companies seems to be limitless. 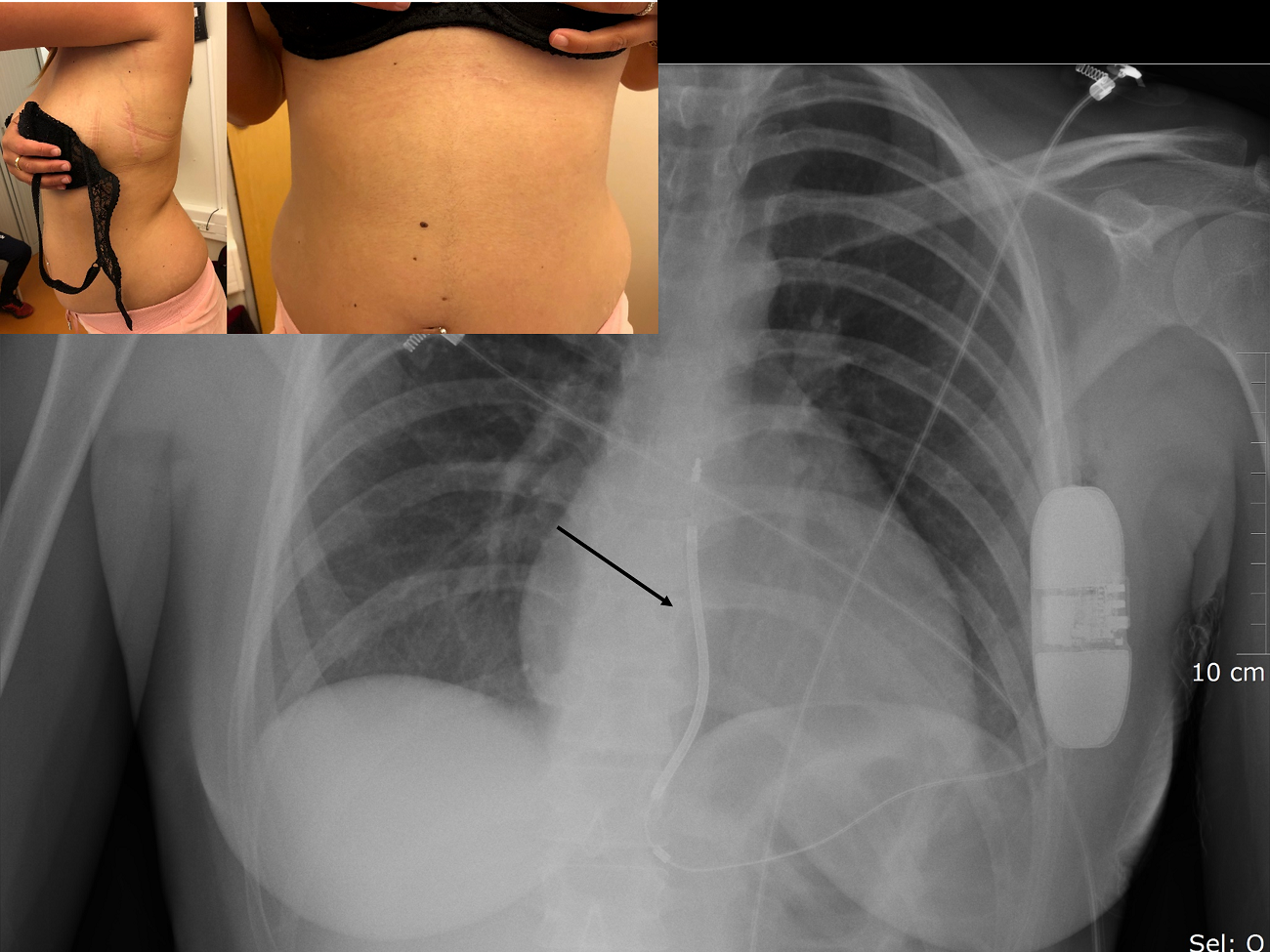 Figure 4. Pictures of a 29 years old woman suffering from arrhythmogenic right ventricular cardiomyopathy, and implanted with an entirely subcutaneous implantable cardioverter defibrillator placed via a two-incision technique. The corresponding fluoroscopic image is also shown with the dedicated subcutaneous fluoroscopic image is shown with the His lead inserted in the ventricular port of the battery (arrow).