Since the year of 1977, when Andreas Gruentzig first successfully performed percutaneous coronary balloon angioplasty to a patient with left anterior descending artery (LAD) stenosis (1), percutaneous coronary interventions (PCI’s) have come to a practice. However, major limitations of balloon angioplasty of coronary arteries were complications such as restenosis and abrupt vessel closure (2). Rate of complications was significantly reduced with the introduction of coronary stents (3). To date PCI’s, when performed in experienced centers with proper indications, have become relatively safe and efficient procedures with high success rate. Coronary stents act as scaffolds to prevent elastic recoil and to prevent the spreading of intimal dissection (4), which frequently occurs after balloon inflation. Unfortunately major complications after contemporary PCI’s still occur: death is about 0.7% and acute myocardial infarction (AMI) is 2%. In this report, we describe a case of dissection of left main coronary artery and aortic root after “routine” PCI. 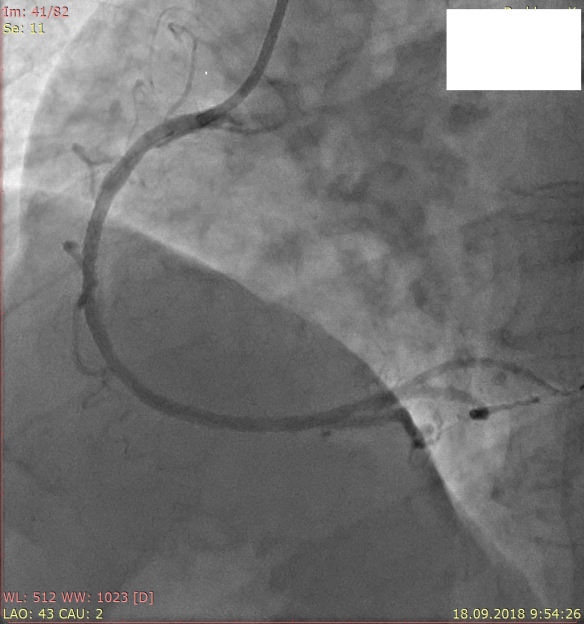 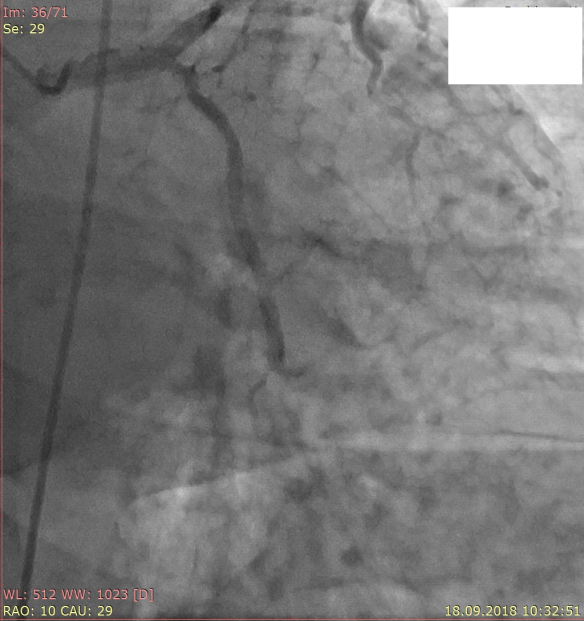 Six hours after PCI patient suffered recurrent intensive chest pain. His ECG was unchanged. On control cineangiography (Fig. 3) there was a thrombus in the terminal part of LMCA with total occlusion of LAD and TIMI 1 flow in LCX. There was acute stent thrombosis in LCX. After crossing LAD occlusion with guidewire, a dissection flap in LMCA and left sinus of Valsalva became visible (Fig. 4). Balloon dilatation in LAD, LMCA, in stent in LCX and in LCX ostium. Bare metal stents (for socioeconomical reasons) were implanted: Rebel (Boston Scientific, USA) 3.0x28 mm in LAD and 4.0x32 mm in LMCA with overlap (Fig. 5). Recrossing the guidewire in LCX through the stent’s struts and balloon dilatation. At the end of procedure, there was TIMI 3 flow in LAD and LCX, no signs of aortic root dissection. However, the control echocardiography showed the signs of double lumen in the ascending aorta. There was a minimal aortic regurgitation. Cardiac dimensions and LV ejection fraction were unchanged.

During two days, the patient was relatively symptom free, but the echocardiography still demonstrated signs of double lumen in the ascending aorta and then on the second day, a chest pain occurred again and it progressed. There was ST elevation in AVR and ST depression in inferior and precordial leads. In order to determine intervention tactics multiple detector computed tomography (MDCT)’s coronary angiography was performed (Fig. 6). MDCT angiography showed occluded LMCA stent and dissection of ascending aorta up to the truncus brachiocephalicus. There were signs of thrombus formation inside the false lumen of aorta. Patient was taken again in catheterization laboratory. Attempt of recanalization of LMCA was unsuccessful and the urgent coronary artery bypass graft surgery was performed on beating heart (off-pump) Anastomosis of left internal mammary artery – LAD was formed and thrombectomy from proximal and distal part of LAD was carried out. During surgical hemostasis sustained ventricular tachycardia developed, which transformed into bradycardia and asystole, despite resuscitation measures, cardiac pacing without capture and biological death was vindicated. 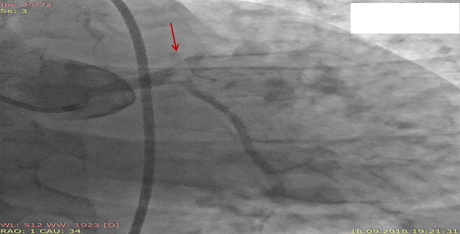 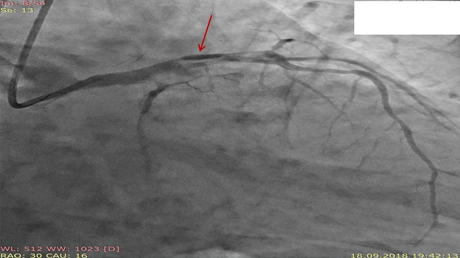 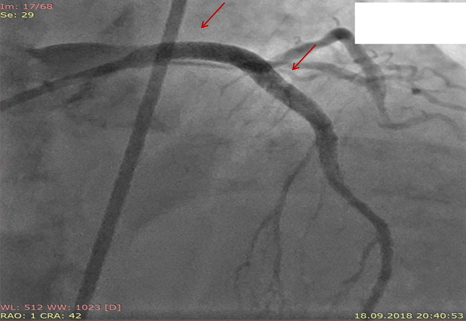 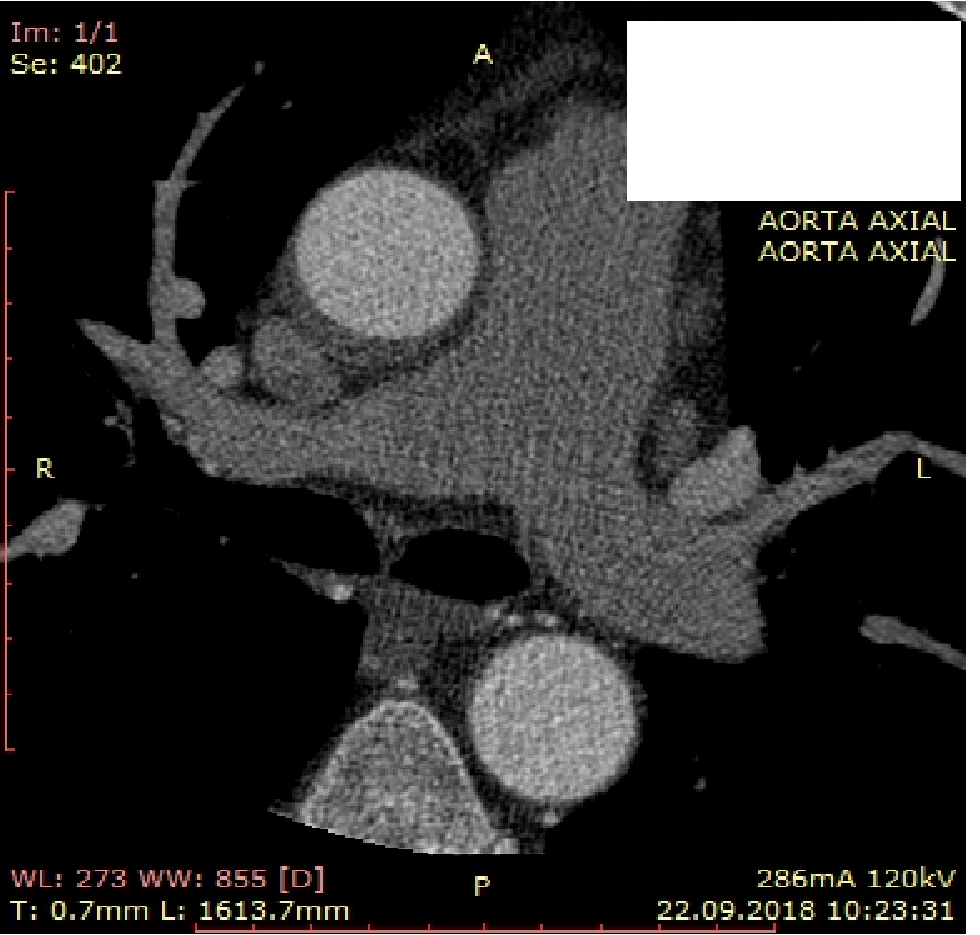 As it has been mentioned above, the incidence of PCI related complications is rare nowadays. Coronary artery dissection is a condition in which there is a tear in a vessel’s intima, sometimes leading to thrombosis and abrupt arterial closure. According to recently published Japanese study (5) the incidence of flow limiting coronary dissection occurred in 1.1% of PCI’s. To date, with the use of stents, dissections can be caused by guidewire, stent edge or guide catheter. Risk factors for coronary artery dissections include aggressive catheter manipulations, stiff wires, guiding catheter of “Amplatz” type, calcified lesions and degenerative aortic disease (6). More frequently, they occur in PCI’s in RCA and in women. Different classifications have been suggested, the most widely accepted are as shown in Table 1(7).

According to this classification in our case, it was Type F dissection. There were difficulties in crossing the guide wire through the tight LCX lesion. Careful examination of  cineangiograms revealed temporary dissection of type A at the terminal part of LMCA (Fig. 7), which disappeared at the end of procedure. 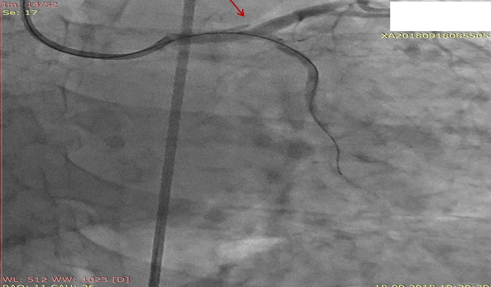 As it is mentioned in the same publication, type I dissections usually have excellent prognosis. In our case, there was initial spontaneous healing of the LMCA dissection, which later progressed into Type III dissection. In 2000, Dunning et al (9) suggested classification of iatrogenic aortic dissection, based on its spread: type 1 was determined when dissection was limited to a sinus of Valsalva, type 2 when it went to ascending aorta but less than 4 cm in length and type 3 exceeding 4 cm. Thus, the patient developed type 3 dissection. However, there were signs of thrombus formation in the false lumen on MDCT angiography and clinically acute myocardial infarction was the culprit for the patients’ deterioration. Therefore, as well as because of the emergency of terminal condition “only” CABG was performed.

Conclusions Iatrogenic coronary artery dissection can lead to lethal effect despite all medical efforts. In order to prevent such a serious complication during percutaneous coronary intervention a thorough choice of instruments, careful catheter manipulations are mandatory with auxiliary devices required for that.