A patient with mediastinal mass and pleural effusion

A 26-year-old male presented at the A&E due to the onset of shortness of breath and tachycardia since a few days. His past medical history was irrelevant. He denied cigarette smoking habit and illicit drugs use. He denied fever, but reported a weight loss of 7-8 Kg over the past 2 months. Imaging workup showed a massive left pleural effusion and an anterior mediastinal mass (Fig. 1). A 28Ch surgical drain chest was inserted and 1.2 liters of serous fluid was removed. The procedure was straightforward, but minimal bleeding was noticed from the surgical wound. For this reason, the patient was not commenced on low molecular weight heparin (LMWH) prophylaxis. Then, the drain was clamped, and the nurse staff was instructed to unclamp the drain tube every 2-3 hours and allow outflow of 200-300 ml of pleural fluid each time.

Following hematologists’ advice, we scheduled urgent left VATS biopsy for the morning after, due to the strong suspect of mediastinal lymphoma. On arrival in the operating room (OR), the patient was prepared for the procedure according to the following scheme: pre-medication not given; chest drainage unclamped, radial artery line inserted, and ultrasound-guided erector spinae block with 7.5 Ropivacaine (10 mls). On induction, the patient had severe decrease in SO2 (78%) and hypotension. The patient was given a stat dose of inotropes, and oxygen flow was increased. Then, after initial improvement, the anesthetist inserted a double-lumen orotracheal tube and the surgical procedure was carried out without difficulties. At the end of operation, however, the patient remained hypoxic, so that he could not be weaned from ventilator. A chest X-ray obtained in the ITU showed a diffuse opacification of the left lung, which was fully expanded (Fig. 2). The patient luckily improved over the subsequent 2 days. The final diagnosis was anaplastic lymphoma, and the patient started the treatment with a good initial response. 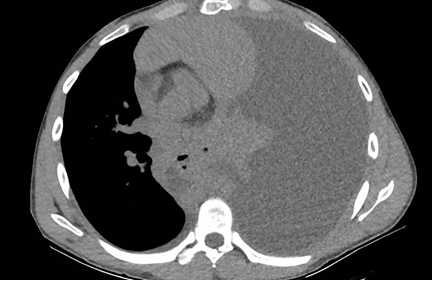 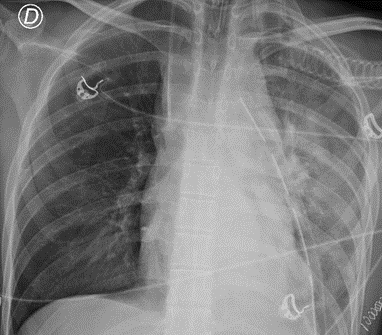 Question:   Which of the following actions could have been useful in preventing the clinical scenario depicted above?

Ethics: Informed consent was obtained from a patient before all procedures