Paroxysmal supraventricular tachycardias during pregnancy are rare; however, it can be a therapeutic challenge because of limitations about use of antiarrhythmic drug therapy and catheter ablation indication, due to the risk of radiation exposure to the fetus and the mother.

We present the case of a pregnant woman with Wolf-Parkinson-White syndrome with recurrent episodes of tachycardia, refractory to antiarrhythmic drug therapy, who underwent catheter ablation of a left lateral accessory pathway without the use of fluoroscopy.

The incidence of arrhythmias during pregnancy is about 1.2 in every 1000 women, most of them are benign, approximately half tend to be asymptomatic and not require complex treatment (1). Recurring and refractory supraventricular tachycardias (SVTs) despite of antiarrhythmic drug therapy during pregnancy are infrequent, however when appearing constitute a therapeutic challenge, due that catheter ablation exposes both the mother and fetus to radiation (2).

A 24-year-old female was admitted to our hospital with a history of 2 episodes of tachycardia since she had 15 years old. Her past drug therapy was unknown. She presented with palpitations of sudden onset and endings of more than 40-minute duration. At this time, being on her first trimester (eighth week) of pregnancy, she was referred to our unit for a new 10-hour duration tachycardia episode. Her surface 12-lead electrocardiogram (ECG) showed a 190-bpm regular QRS-narrow tachycardia. This was converted to sinus rhythm after intravenous administration of 12 mg.-bolus of adenosine. Immediately, her surface 12- lead ECG showed a 0.08 second PR interval and delta wave suggested left lateral accessory pathway and her vital signs were stable. Physical examination was normal and transthoracic echocardiogram reported a structurally normal heart. During her in-hospital stay, she presented two additional episodes of the same tachycardia, requiring the use of more antiarrhythmic drugs.

It was decided to perform an electrophysiological study without the use of fluoroscopy with 3-D mapping system (Ensite Precision. Abbott, Minneapolis, USA) (Fig. 1).

Under local anesthesia, the right femoral vein and artery were cannulated with 6 and 7 Fr introducers. Through femoral vein decapolar diagnostic catheter Inquiry SJM Abbott for the initial 3-D construction was inserted. 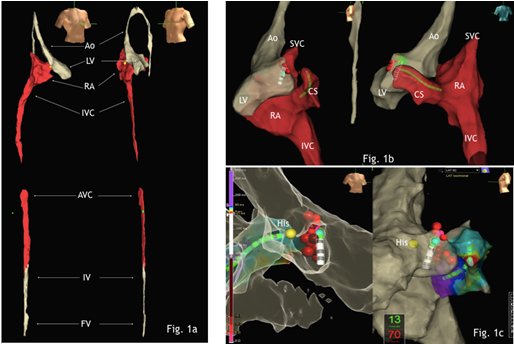 Figure 1. 1a. Panoramic 3-D reconstruction from the femoral puncture approach site to the heart. 1b. Left lateral and posterior projections showing decapolar catheter in coronary sinus delimiting posterior and lateral mitral valve. 1c. Right oblique and lateral projections where the ablation points are observed at the lateral level of the mitral valve. 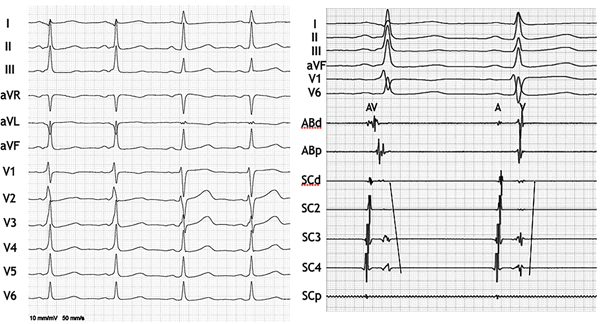 Figure 2. ECG and EGMs before and after catheter ablation. Observe the normalization of ECG and

AV separation with change in the ventricular activation sequence.

The right atrium and its junction with the inferior and superior vena cava was identified by the presence or absence of atrial electrograms (EGMs), afterwards the His area was defined, and the catheter was placed within the coronary sinus to anatomically delimit the posterior and lateral areas of the mitral ring (Fig. 1).

Electrograms (EGMs) obtained with the decapolar catheter documented maximum precocity on the lateral portion of the mitral ring. Posteriorly an ablation Inquiry SJM Abbott 4-mm tip catheter was advanced through the femoral artery and at the same time 3D reconstruction of aorta, left ventricle and mitral ring anatomy was performed. Taking the previous reference from the decapolar catheter in the coronary sinus, the ablation catheter was placed at the lateral level of the mitral valve; 30-watts/70°C radiofrequency was applied; and we observed the atrioventricular interval separation in the EGMs and disappearance of the delta wave and normalization of the PR interval (Fig. 2). Subsequently a ventricular pacing with S1-S1 at 480 ms showed dissociation between ventricle and atrial EGMs. The procedure lasted 40 minutes.

The patient was discharged one day after the procedure without antiarrhythmic treatment. The patient was evaluated one month later, and a new ECG was performed showing normal PR interval and absence of delta waves. The recommendations for de obstetricians were to perform 12-lead surface ECG every trimester and before delivery.

Arrhythmias during pregnancy are an uncommon clinical challenge, becoming more important as expecting women conceive at older ages. This increases the risk of clinically significant arrhythmias during pregnancy and, depending on the mother’s preconception general clinical status; this can all dramatically influence the well-being of the fetus and the term of the pregnancy. However, under strict observation of clinical experts and with the appropriate support and planning, the pregnancies can successfully be carried to the term, even in expecting mothers with structural disease (3).

In general, the first line in handling arrhythmias during pregnancy is always pharmacological control; however, antiarrhythmics can fail in controlling the symptoms or could be contraindicated in a particular situation due to its teratogenic effects like intrauterine growth restriction, congenital goiter, hypothyroidism or hyperthyroidism and fetal QT interval prolongation. The main concern regarding the use of antiarrhythmic medication during pregnancy is the potential adverse effects on the fetus. Even though the first trimester is associated with higher teratogenic risk, exposure to the drug in later stages could result in adverse effects in fetal growth and development, uterine contractility and higher proarrhythmogenic risk (5).

Cardiac electrophysiology procedures during pregnancy should be avoided as much as possible; however, clinically significant and refractory arrhythmias should be treated via this method if there is a need. A careful individual evaluation must be conducted, reviewing not only the risk of the invasive procedure, but also the risk of hemodynamic deterioration due to the arrhythmia and its progression during the gestation (6).

It is currently considered a Class IIA indication with C level evidence to conduct a conventional catheter ablation with fluoroscopy for handling supraventricular arrhythmias in pregnant patients who show frequent, symptomatic and drug-resistant arrhythmias (7).

The goal in invasive electrophysiology procedures during pregnancy is to avoid exposure to fluoroscopy, due to the increased risk of malformation or harm to the fetus, especially during the first trimester. Therefore, 3-D mapping systems that allow navigation with intracardiac catheters without the need for an ionizing irradiant are recommended when considering procedures during pregnancy (8).

There are available single-center and multi-center studies describing the viability, safety and efficacy of fluoroscopy-free procedures; nevertheless, amongst the population of expecting women presenting with SVT due to a left lateral WPW syndrome only two prior cases have been reported without a description of the procedure, which documented the conducting of the processes guided by electro-anatomical 3-D mapping without associated complications to the mother and fetus (9-16).

The zero-fluoroscopy catheter ablation of SVT guided by an electro-anatomical 3-D mapping system has shown safety and efficacy when compared to traditional fluoroscopy focus in expecting women, while excluding radiation to the fetus, mother and operators (17).

Catheter ablation for SVTs must be delayed until the second trimester, if possible, but if necessary due to a drug-resistant, clinically significant or hemodynamically ill-tolerated arrhythmias, an ablation must be conducted within an experienced center, using electro-anatomical mapping with catheter navigation systems and zero-fluoroscopy (18).

Our patient was discharged one day after the procedure without antiarrhythmic treatment. Follow-up ECG one month later demonstrated normal PR interval  and absence of delta waves. We provided recommendations to obstetricians to perform 12-lead surface ECG every trimester and before delivery.

This case describes the safety and effectiveness of catheter ablation with local anesthesia, no sedation, zero-fluoroscopy using a 3-D mapping system for Wolf-Parkinson-White accessory pathway. These types of procedures could be considered for pregnant patients with an adverse response to antiarrhythmics.