This report describes a 32 years old patient with Marfan syndrome and hypertension. David`s procedure was performed to the patient three months before due to dissection of the ascending thoracic aorta. Computer tomography scan showed DeBakey type III dissection of aorta beginning from left subclavian artery with transition to the ostium of the celiac trunk and proximal part of the left common iliac artery. Stent-grafts in the descending thoracic aorta with overlapping of left subclavian artery were implanted to the patient with Marfan syndrome. Patient was discharged and no complications recorded at 6th month follow-up.

First stent-graft for closure of abdominal aortic aneurysm was used by Parodi et al. in 1991 (1). Subsequently, among the 110 patients with aortic aneurysms who underwent implantation of endovascular stent-grafts initial success was achieved in 75% of cases. Overall, late success rate was 62% and if calculated only among patients with initial success it was - 80%. During recent years, the method of endovascular treatment of aneurysms has gained more recognition in clinical practice at international level (1-3). To date, many studies confirm minimal invasiveness of implantation of a stent-graft in aorta, as opposed to open surgery.

We describe a patient with Marfan syndrome with dissection of aorta treated by implantation of stent-graft.

A 32 years old female patient with Marfan syndrome and very high-risk arterial hypertension was admitted to our hospital with complaints of pain in her back and the upper third of the stomach, dyspnea. Three months earlier David`s procedure was performed to the patient due to dissection of the ascending thoracic aorta. Postoperative period was uncomplicated. A control compute tomography (CT) scan (Fig. 1) 3 months later showed aortic DeBakey type III dissection beginning from left subclavian artery with transition to the ostium of the celiac trunk and proximal part of the left common iliac artery. The diameter of the ascending aorta was  35 mm, the arc – 28 mm, the first segment of the descending aorta - 26 mm. Diagnostics of  Willis' circle confirmed the possibility of collateral circulation between left internal carotid artery and left vertebral artery. Among other tests, creatinine level was 70.5 mmol/l, fibrinogen - 5772mg/l; APTT – 46 s, PTI - 84%. Transthoracic echocardiography confirmed the presence of dissection and false lumen in the descending aorta and normally functioning graft of the ascending aorta. The patient was offered an implantation of stent-grafts in the descending thoracic aorta with overlapping of left subclavian artery, and informed consent for procedure was obtained. Considering the anatomical features, volume and the length of the false lumen, it was decided to implant a second stent- graft below the previous one. The procedure was performed by using general endotracheal anesthesia. The PigTail 5 Fr catheter (Alvimedica Co., Turkey.) was inserted through the right transradial access into the ascending aorta. Aortography showed the presence of dissection, false lumen beginning from the left subclavian artery (Fig. 2A,B). 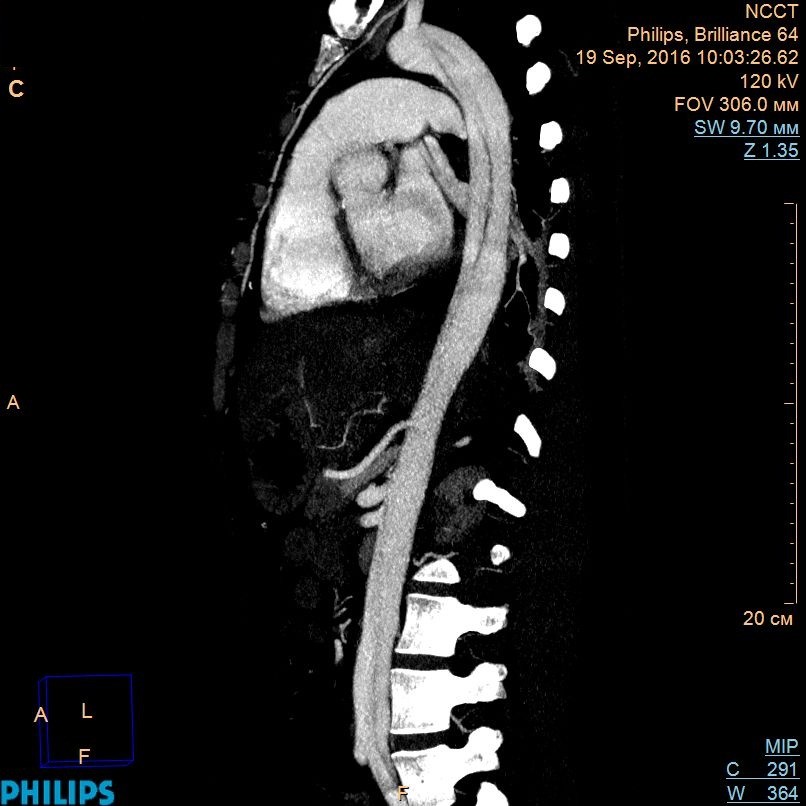 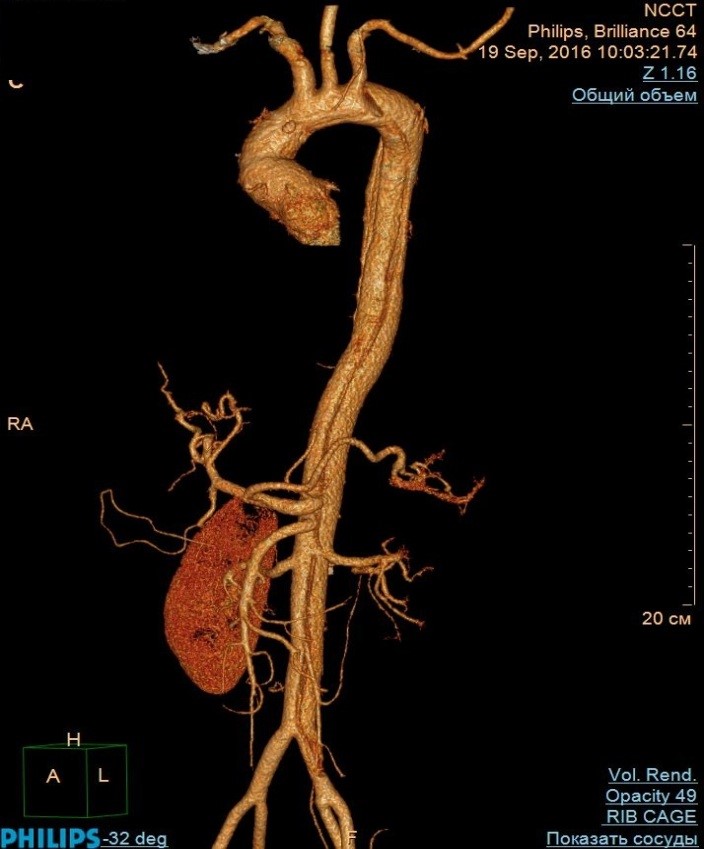 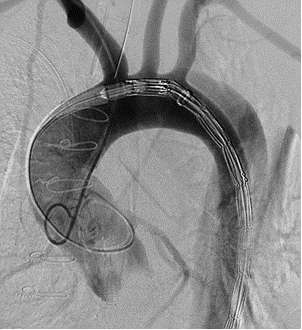 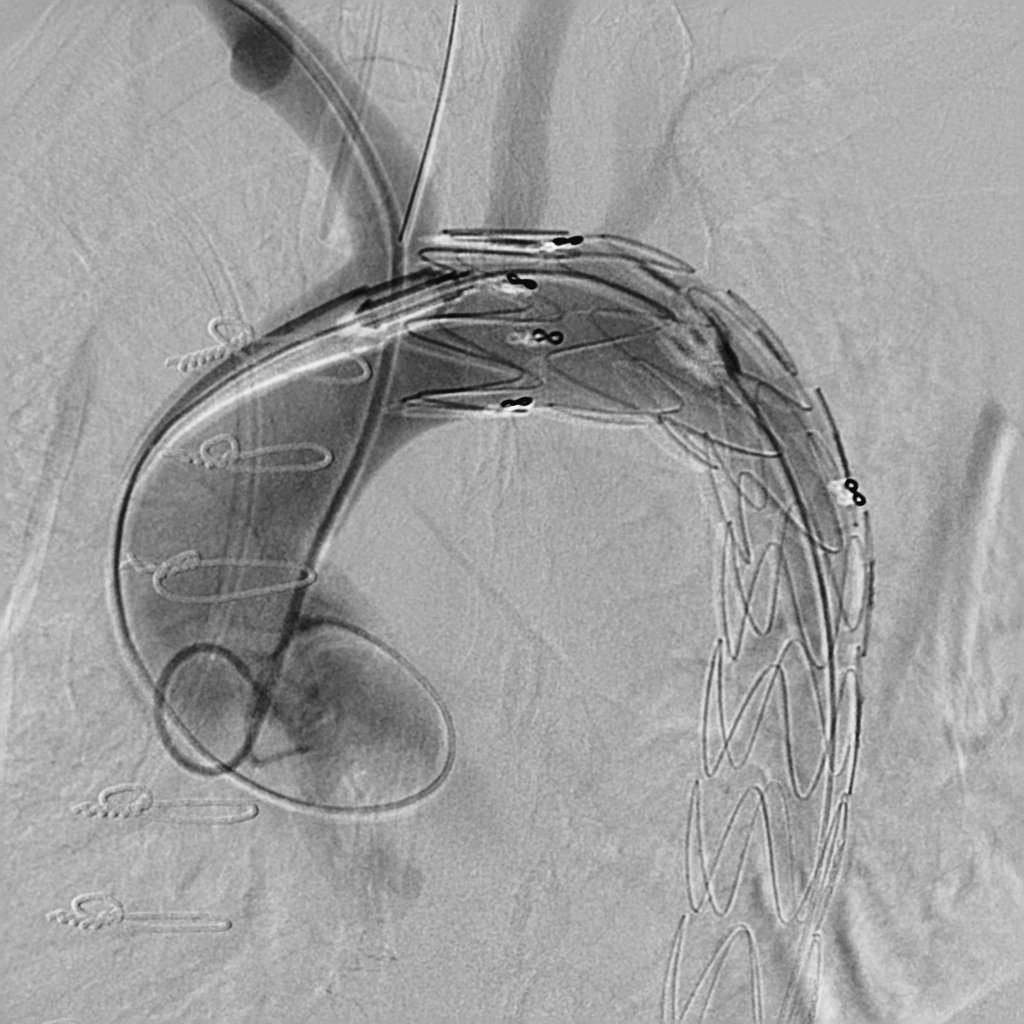 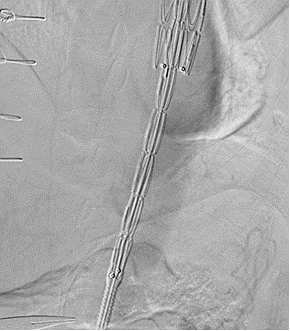 Right common femoral artery was separated and through the puncture SuperStiff Amplatzer (?????) wire

was introduced till the aortic root.

Stent graft was positioned and implanted with obturating of the left subclavian artery. Control aortography showed fully disclosed stent graft, with absence of endoleaks in a false lumen. As a next step second graft was introduced into the thoracic aorta at the level of the celiac trunk (Fig.2C). 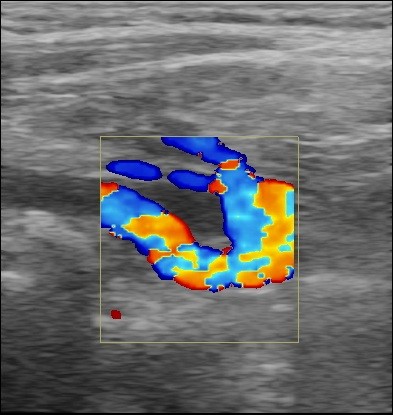 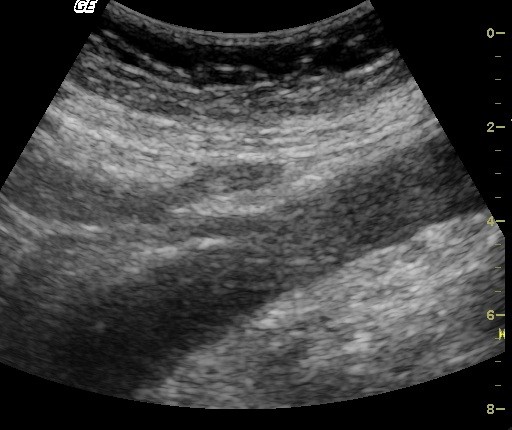 Figure  3. Ultrasound diagnosis of one month after the implantation of the stent-grafts:  a) Retrograde filling of the left subclavian artery from the left vertebral artery; b) Absence of endoleaks in false lumen; c) Absence of false lumen at the level of the celiac trunk.

In the early period, one and six month after the procedure ultrasound examinations were performed, demonstrating absence of endoleaks

In 1994, Dake et al. (4) reported experience on implantation of stent grafts in the descending part of the thoracic aorta in 13 patients. In 1998, the same group of authors (5) reported outcomes of 103 patients with aneurysms of the descending thoracic aorta treated by this method. Complete thrombosis of the aneurysm was achieved in 83% of patients, and operative mortality was 9%. Complications in form of paraplegia and stroke developed in 3% and 7% of patients, respectively. The most frequent complication was endoleak (4, 5).

Usually intimal aortic dissection is a condition with a high mortality rate. Survival without surgical correction can remain low. Typically, surgical procedure consists of replacing the portion of blood vessel by artificial graft. It is highly traumatic and associated with high post-operative morbidity and mortality (6).

Overview of 100 reports on rupture of aneurysms of the thoracic aorta, including 76 cases with Thoracic Endovascular Aortic Repair (TEVAR) and 24 cases with the help of thoracotomy surgery (DTAR -???), showed that the mortality rate associated with TEVAR was 8% versus 29% at DTAR. In addition, the duration of hospitalization is usually shorter in TEVAR group, although there has been no significant difference between the two groups in frequency of postoperative complications such as cerebral infarction, myocardial infarction, acute renal failure, paraplegia (7).

In our patient, dissection occurred without the presence of aortic aneurysm, despite arterial hypertension and Marfan syndrome. This is the first stent-graft implantation case in the Kyrgyzstan territory. Despite great success in implantations of stent grafts, certain complications remain, albeit not frequently. Endoleaks, collapse of the stent, stroke, bronchial obstruction, aortic dissection, rupture of the wall, migration of the implant and paralysis can occur as severe complications. In our case, such complications did not occur in postoperative period, and the presence of retrograde filling of the left vertebral artery negates the obstruction of the left subclavian artery. Open surgical approach tactics in this case could be more traumatic, that can affect the postoperative period and quality of life.

Methods of stent-graft implantation and TEVAR continue to confirm efficacy in the treatment of intimal dissection of descending thoracic aorta. Patients also need further observation to determine the long-term results.

Equally contributed to management of patient and preparation of case report, fulfilled all authorship criteria

Acknowledgement: None, no external funding or material support was received.

This work is licensed under a Creative Commons Attribution 4.0 International License.