In this article, several uncommon cases of different atrial flutter (AFL) types are described. Electrocardiogram (ECG), the standard and widespread method of rhythm disturbances detection, sometimes can be insufficient for correct diagnosis in such cases. Different features of atrioventricular (AV) conduction and multiple atrial macro re-entry circles may considerably influence the surface ECG. Another distorting factor of AFL appearance is possibility of ECG elements superposition and overlapping. Some atypical forms of AFL can be poorly visible and sometimes cannot be  differentiated from other types of supraventricular arrhythmias on surface 12-lead ECG.

Atrial flutter (AFL) is one of the most common supraventricular arrhythmias with macro-reentrant mechanism of atrial activation around an anatomical barrier with regular atrial rate ≥ 240 beats/min (1, 2). Despite of recent advances in invasive electrophysiology, electrocardiography (ECG) remains one of the most effective methods used for rhythm disorders diagnostics. It is still the tool of the first choice for practitioners that largely determines further diagnostics and treatment strategy to be used to manage a patient (3, 4). However, proper interpretation of ECG may be rather difficult in patients with AFL and different types of atrial tachycardias (AT). Sometimes we need only atrial mapping for precise diagnosis. Atrial flutter can be described as counterclockwise or clockwise typical (cavotricuspid isthmus (CTI)-dependent) and atypical by ECG (2). For clinicians, a key point of ECG diagnostics of typical AFL is to identify a “saw tooth” flutter curve with characteristic F waves in II, III, aVF and V1 leads, which are caused by AFL waves circulating in the right atrium. In 10-30% of typical AFLs, the reentrant circuit rotates in a clockwise direction around the tricuspid valve,

In this article, we examine ECG fragments in patients with different types of AFL, analyze AV conduction and provide a summary of recent approaches and algorithms applied in ECG diagnostics of AFL.

In AFL, atrial F waves usually occur at a rate within 220-350 bpm, although the rate may decrease below 200 bpm or increase to 400 bpm. The maximum possibility of AV node conduction rarely exceeds 180-220 bpm. This value depends on many factors and decreases with age. While absolute irregularity of RR intervals is characteristic of AF, these intervals may be both regular and irregular in case of AFL. Sometimes AFL involves a particular pattern of AV conduction called “regular irregularity”.

For most AFL cases, a ratio of AV conduction can be calculated. Most frequently, AV conduction equals 2:1 or 4:1, while a 3:1 is less common (Fig. 1). Quite often, a regular 2:1 conduction across the AV node is difficult to interpret because F waves overlap QRS complexes ant T waves. Sometimes it makes impossible to make a correct diagnosis using a standard 12-lead ECG. However, the analysis of a long ECG record or Holter monitoring is beneficial in identifying episodes with a decreased or increased atrial rate or episodes of irregular conduction with clearly visible F waves. This data considerably facilitates the diagnosis. When required, vagal tests or adenosine via intravenous injection can be applied to cause a short time block of conduction in the AV node (7). During this short period, electrical activity of atria becomes clearly visible on ECG.

In some cases, AV node conduction increases due to influence of some factors (activated sympathetic nervous system, hyperthyroidism). On the other side, the use of class I antiarrhythmic drugs is known to slow down the atrial rate while the AV conduction remains the same or increases. This may result in developing AFL with 1:1 AV conduction. The His-Purkinje system cannot properly conduct impulses with rate beyond 200 per minute and aberrant conduction with wide QRS complex occurs (Fig. 2a.). Very high rate and aberrant ventricular complexes often result in a significant reduction of cardiac output and deterioration of patients` systemic hemodynamics.

In young patients, having normal function of conduction system such clinical situation can lead to AFL with 1:1 AV conduction with normal ventricular complexes (Fig. 2b).

Obviously, this narrow QRS complex tachycardia must be differentiated from other types of supraventricular tachycardia, such as atrial tachycardia and AV-node tachycardia (3, 10). However, rarely AFL occurs with 1:1 conduction: extraordinary high heart rate around 225 bpm, and some episodes of irregular ventricular conduction, which can be seen during further observation (Fig.2c.)

Atrial rate in AFL may drop down to 200 bpm, and even to 150 bpm due to antiarrhythmic therapy. The main factors determining atrial rate in atrial flutter are the size of macro re-entry circle and electrophysiological properties of atrial tissues.

Observations from long-term monitoring demonstrated that AFL could spontaneously stop or transform into other forms of supraventricular arrhythmias (3, 4). The most often AFL changes to atrial fibrillation (6, 8, 9); changes between different types of atrial flutter are less common. Figure 4 shows AFL with atrial rate of 175 per minute, regular 2:1 conduction and ventricular rate of 87 bpm spontaneously changing to AFL with atrial rate of 280 per minute, conduction 4:1 and ventricular rate 70 bpm. The most likely explanation of this phenomenon is a change of the impulse circulation path to shorter one that accelerates the impulse circulation while AV node conduction and ventricular rate changed slightly. 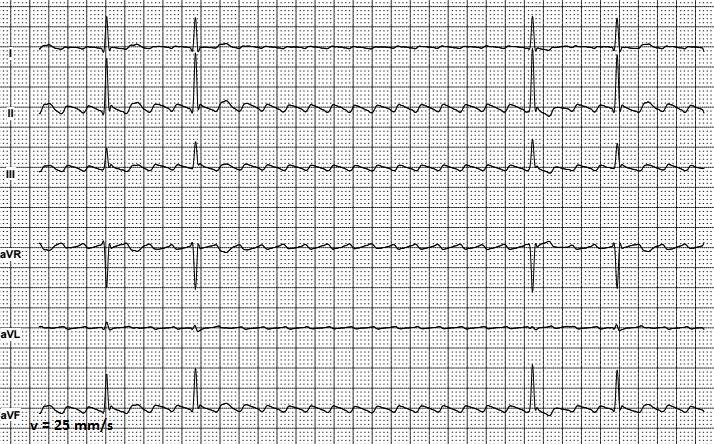 Interpretation of the atrial flutter recordings sometimes is complicated when ECG shows pauses of various duration due to episodically worsening of AV conduction. Figure 5 presents a classical isthmus-dependent AFL with 3.5 seconds pause. Long pauses, which can be seen on ECG, are clinically important signs of impaired AV conduction and may be considered as indication to implantation of the pacemaker. In presented case, the pause was not associated with any symptoms and the patient did not complain of weakness or dizziness, associated with bradycardia. Asymptomatic pauses shorter than 4-6 seconds during AF/AFL do not require pacemaker implantation. Radiofrequency ablation procedure should be performed due to isthmus-dependent atrial flutter. After sinus rhythm restoration, recurrence of AV node conduction disturbances is less likely.

Prolonged bradycardia episodes with rhythmic ventricular complexes may also be present during AFL.

ECG pattern shown on Figure 6, may suggest a complete AV-node conduction block, Frederick syndrome. At the same time, QRS complexes of the same morphology, which are conducted by AV-node faster than in established rhythm, can be seen. Therefore, it can be concluded that AV-node conduction is preserved and possibility of complete AV-node block is less likely in this case. The ECG on Figure 6 presents a short episode of AFL with regular 8:1 AV node conduction with further transformation in atrial flutter with irregular conduction. During atrial flutter, a number of impulses entering AV node exceeds its conduction capacity. Therefore, the functional AV block occurs in the atrioventricular node to prevent excessively high contraction rate of ventricles and maintain systemic hemodynamics parameters. Figure 7a shows a specific multilevel block of AV-node conduction with type A alternating Wenckebach phenomenon (11). The first impulse seems to be normally conducted; the second impulse is blocked in upper level of AV node; the third is conducted with a delay; the fourth is blocked in upper level of AV node; conduction of the fifth is blocked in lower parts of AV junction; and the sixth impulse is not conducted because of blockade in upper level of AV node.  ECG on Figure 7a presents a 6:2 node conduction pattern, where only first and third impulses entered the ventricles. Due to varying properties of AV node, conducting ratios may change (11). 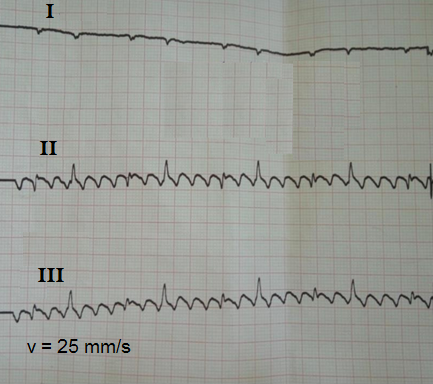 Figure 7a.  Atrial flutter with a rare conduction 6:2 type and significant overlapping of QRS complexes and F waves.

This conduction mechanism is presented on ladder diagram (Fig. 7b). 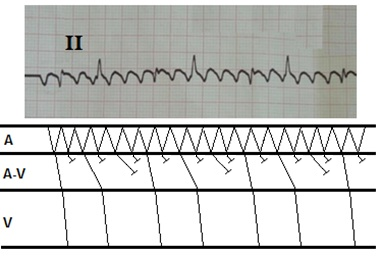 Figure 7b. Excitation and conduction in atria, atrioventricular node and ventricles in atrial flutter with type A alternating Wenckebach phenomenon and 6:2 conduction.

High amplitude of F waves and low voltage of QRS complexes can seriously complicate the interpretation because of overlapping of ECG elements. At lead I (Fig. 7a) low amplitude QRS complexes can be seen. They are arrhythmic, although ordered in a particular regular sequence. In classical isthmus-dependent AFL, there are typical high amplitude F waves at II and III leads. They are overlapped with QRS complexes of low amplitude. If QRS complex coincides with the top of F wave, it is clearly visible. Conversely, when QRS coincides with the bottom of F wave it`s voltage is overshadowed that makes it less noticeable. At the first glance, the analysis of II and III leads on this ECG may seem to determine ventricular rate being equal to 55 bpm, while real ventricular rate is 110 bpm.

The overlapping of high amplitude waves in classical isthmus-dependent AFL may reshape other ECG elements. Figure 8 shows a fragment of Holter monitoring. High amplitude F waves were recorded in V3 and V5 modified bipolar chest leads. The positive part of these waves overlaps the beginning of ST segment making an impression of its elevation.  The negative parts of F waves overlaps T waves end and this last part of T wave seems negative. Such ECG pattern is very similar to ECG in acute myocardial infarction with ST segment elevation. Nevertheless, the patient did not report angina pain, he felt quite well, though he reported the episodes of palpitations due to the atrial flutter.

Atypical atrial flutter is a definition that covers different macro-reentrant atrial tachycardias that not pass through cavotricuspid isthmus. These tachycardias can be divided into three main groups: right atrium flutter that does not includes cavotricuspid isthmus, left atrium flutter (often pulmonary veins and mitral valve become a place of impulse circulation) and so called “incisional” flutters where macro-reentry mechanism occurs around iatrogenic scars in atria appeared after invasive procedures (2, 7). Diagnosis of the type of flutter using ECG characteristics is difficult if not impossible in patients that have previously undergone surgical "MAZE" ablation of the atria or percutaneous pulmonary vein isolation procedures. Multiple areas of slow conduction in these patients can result a high degree of variability of flutter wave morphology.

In case of the atypical AFL, ECG may contain slightly visible low amplitude F waves in leads II, III and aVF, while waves with a higher amplitude can be recorded in leads V1-V3 (Fig. 9.) 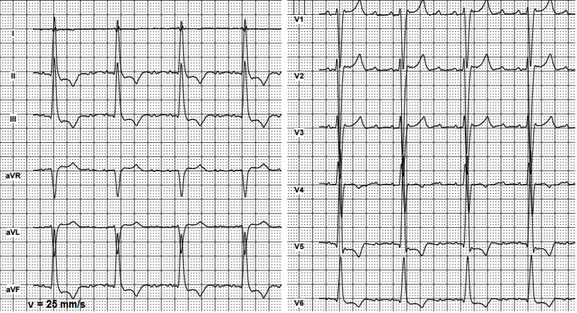 For 4:1 AV node conduction and normal ventricular rate, F waves are discernible at isoelectric line between QRS complexes. In cases with faster ventricular rate and 2:1 AV conduction, diagnosis of atrial flutter with standard ECG is complicated and even sometimes impossible. In the case shown on Figure 10, atypical AFL must be thoroughly differentiated from sinus tachycardia. F waves characteristic for atrial flutter can be hardly seen only in V1-V3 leads.

The highest amplitude of F waves in atypical atrial flutter is often recorded in lead V1.

Atrial flutter is a heart rhythm disorder, which can be both easy and very difficult to interpret on standard 12-lead electrocardiogram. ECG data with presence of AFL may be diverse and often lead to diagnostic errors. Sometimes it is rather complicated to differentiate AFL from sinus tachycardia, other atrial reentrant tachycardia and atrial fibrillation. ECG findings must always be considered together with clinical data and results of other tests. Due to the increasing number of invasive cardiac procedures, including those for treatment of atrial fibrillation, the incidence of atypical, postoperative scar-related forms of atrial flutter is increasing. These atypical flutters can be especially challenging if not impossible to diagnose on the surface ECG. In these cases only an invasive electrophysiology study can provide the definite diagnosis.

Authorship: M.S.S. and U.P.Ch-R. equally contributed to the preparation of manuscript and fulfilled authorship criteria. 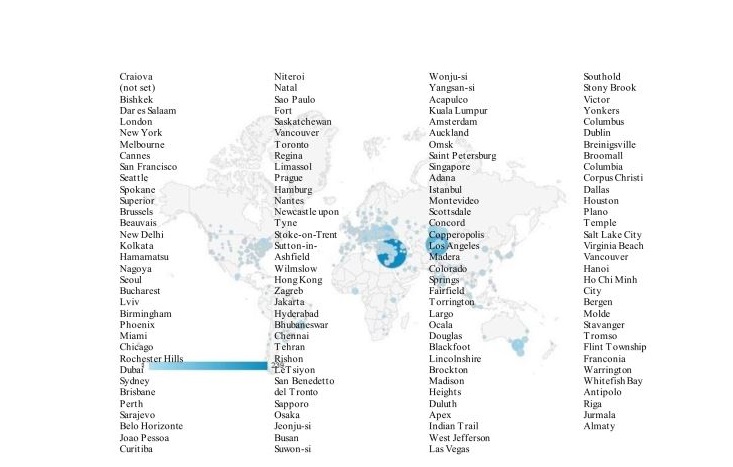