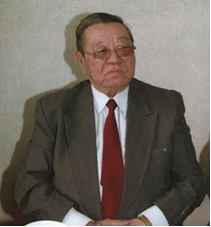 Usenbek B. Baisakov physician by vocation, who devoted himself to serve medicine, was a careful attentive family man, a husband and a father, a kind colleague.

He was born in 1930, in the village Aral, Togtogul region, Djalal-Abad oblast. He started his professional career after graduation of fellowship (aspirantura) at the Institute of Medicine of the Academy of Science of Kyrgyz Republic in 1955. He worked as an assistant professor, associate professor, chief of department and since 1992 – professor of the department of general surgery of Kyrgyz State Medical Institute. He was an outstanding specialist in surgical endocrinology, cardiac surgery and surgical gastroenterology. He had many students and under his supervision, 1 PHD dissertation was defended.  Usen Baisakov was a supervisor of several generations of surgeons. He published more than 90 scientific works, among them the most prominent are: Surgical treatment of rheumatic valvular heart disease in children and adolescents in conditions of cardiopulmonary bypass, Thoracal surgery, Moscow, 1989; Surgical treatment of thyroid gland diseases in Kyrgyzstan, 1988, Academy of Science works, devoted to 80th anniversary of academician IK Akhunbaev, Frunze, Kyrgyzstan, 1988; Clinical classification of garstroduodenal bleeding of  ulcer etiology, Actual Problems of Experimental Surgery, Frunze , 1955; Surgical treatment of complex pararectal fistula, Zdarvoohraneniye Kyrgyzii, n6, 1994.  He was a member of the International Editorial Board of Heart, Vessels and Transplantation.

On 11th September 2018, medical community of the republic accompanied him to his last journey. He lived a long and interesting life, this talented, mutli-profile doctor and scientist, who gained respect and reputation only by hard work and knowledge. Usen Baisakov forever will stay in memory of relatives, friends, students and colleagues.