The history of development of congenital heart diseases surgery (CHD) in Kyrgyzstan and overall in cardiac surgery is associated with the name of academician Isa Konoevich Akhunbaev. The first CHD operation was patent ductus arteriosus (PDA) ligation performed by the academician in 1962 (Table 1). In addition, the first cardiac operation using cardiac-pulmonary bypass (CPB) was CHD surgery when atrial septal defect repair was conducted by academician V.I.Burakovsky from the Academy of Medical Sciences of the Soviet Union (AMS of USSR) together with Isa Akhunbaev from the Academy of Sciences of the Kyrgyz Socialist Republic (AS of KSR) in 1964. From 1964 to 1975 Akhunbayev together with his students conducted 34 CHD surgeries on CPB and 10 operations for valvular surgery.

The cardiac surgery department with 50 beds was established in 1976  at the Republican Clinical Hospital (RCH). From 1975 to 1985 the team of the Republican Center of Cardiac Surgery managed to perform 370 operations using  CPB for various forms of CHD. Due to insufficiency of appropriate equipment and limited diagnostics, only children with CHD weighing more than 15 kg were subjected to surgical treatment under CPB conditions.

In 1985 Department of Cardiac Surgery of the RCH was transferred to the Scientific Research Institute of Cardiology (SRI of Cardiology, currently: National Center of Cardiology and Internal medicine) by the decree of the Ministry of Health. The specialized Department of Congenital Heart Disease Surgery with 20 beds was established in 1986. Enhancement of diagnostic capabilities, surgical techniques and postoperative care between 1986 to 1990 led to the improvement of surgical interventions both in quality and quantity. In terms of the quantity and volume of surgical interventions for CHD between 1986 to 1990 the Department of Congenital Heart Disease Surgery (#2 department of Cardiac Surgery) of SRI Cardiology was ranked as one of the best departments in the Soviet Union. In 2004, Cardiac Surgical Care was separated from the National Center of Cardiology and Internal Medicine, and the Scientific-Research Institute for Heart Surgery and Organ Transplantation (SRIHSOT) was established by decree of the Government. On the basis of the newly established institute the Department of Surgery for Congenital Heart Diseases (DSCHD) was established with 20 beds.

From 2000 development of pediatric cardiac surgery boosted: surgeons were trained in internships, in specializations abroad and in our country performing various operations for CHD. As a result, we can see decrease in postoperative mortality, increase in quantity and volume of operations and an active implementation of Western technology in the domestic cardiac surgery (Fig. 1). 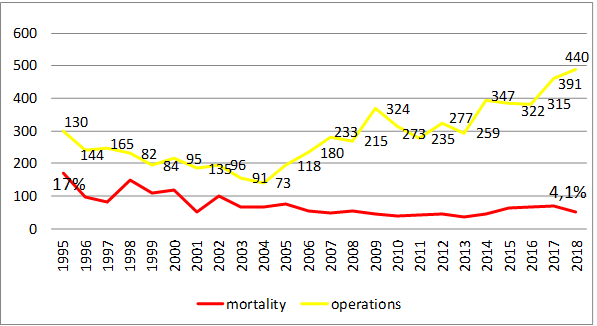 Figure 1. Dynamics of increase in the quantity of operations and reduction of mortality

As can be seen from the presented diagram below, the dynamic growth of the total number of operations is accompanied by an increase in the number of patients with complex congenital heart defects and children with lower weight. 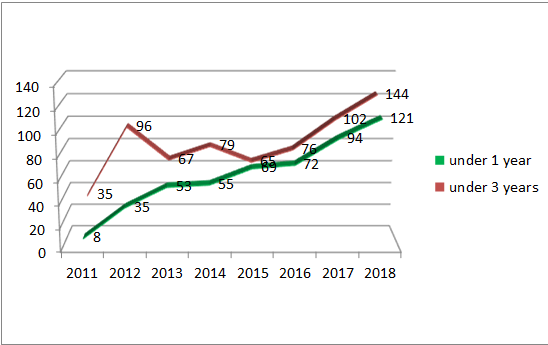 From year to year, the amount of surgical care provided to newborns with CHD increases. Surgical interventions for complex congenital heart defects are being developed. Methods for the pre-and postoperative management of patients with complicated high pulmonary hypertension were developed and implemented.
Currently in DSCHD more than 20 types of operations for complex CHD surgeries are being introduced into clinical practice (Table 2). Moreover, operations are carried out annually with foreign colleagues. The qualification of the staff in operating children with a lower weight is increasing.

contributed to the study and preparation of manuscript