This report describes an extremely rare case of an aorto-right ventricular tunnel originating from the left coronary sinus with abnormality of left coronary artery in the 11-year-old child.

Aorto-right ventricular tunnel is an extremely rare anomalous communication between aorta and the right ventricular cavity (1-18). This defect was first reported by K. Hart (1905) and J. Edwards (1961), and was given a term by Levi et al. as an aorto-ventricular tunnel in 1963 (13). To date, approximately 147 such cases have been reported (11). The cause of this defect is unknown. Incidence of its development is about 0.1% of all diagnosed congenital heart defects (16, 17).

This is a pathology in which there is an abnormal communication between ascending aorta and one of ventricles of human heart with a pathological retrograde blood flow from the aorta to the ventricle, followed by hypertrophy and dilatation of the ventricle, and severe heart failure, which leads to death in the first months of life. Also, it can cause severe aortic valve insufficiency, if child grows to an older age (2, 10).

An 11 years old boy was admitted with complaints of dyspnea. Complaints intensified for 2 months. Physical examination: Rhythmic heart sounds, heart rate at admission 90 beats per minute. Systolic and diastolic murmur at the apex. Blood pressure 90/60 mmHg. There was no hepatomegaly. ECG changes on admission: sinus rhythm, signs of concomitant hypertrophy of both ventricles.

Left pulmonary artery was moderately hypoplastic and signs of pulmonary hypertension and cardiomegaly (RV hypertrophy) were identified. Pulmonary veins drained in the left atrium. There are no data for atrial, ventricular septal defect and patent ductus arteriosus. A collector (tunnel) from the left coronary sinus along the posterior surface of the heart, 27 mm in diameter, was visualized. Tunnel opened in the inlet portion of the right ventricle cavity (Fig. 1). 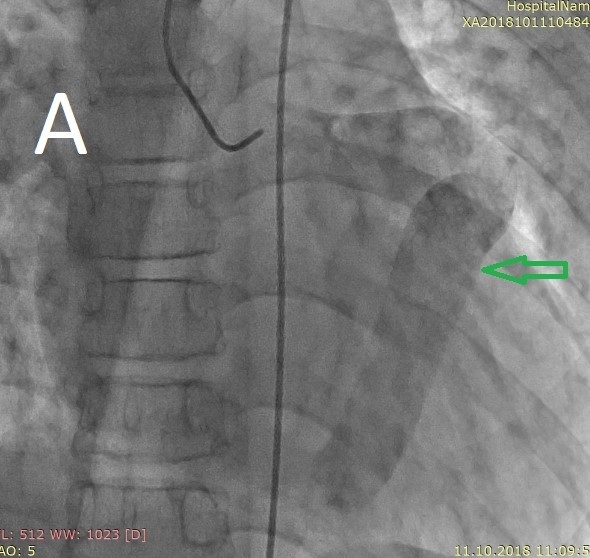 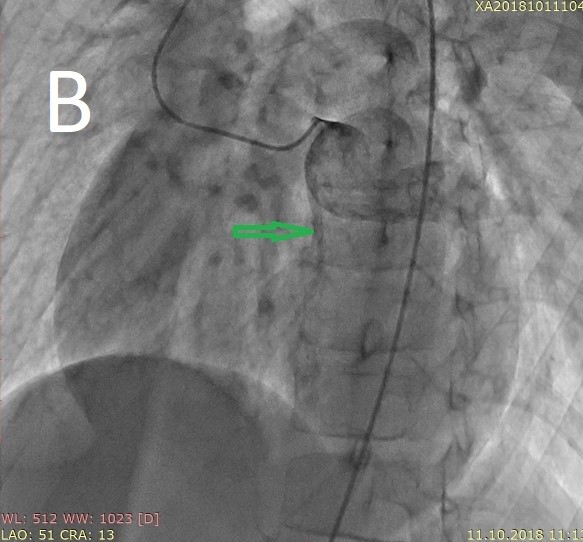 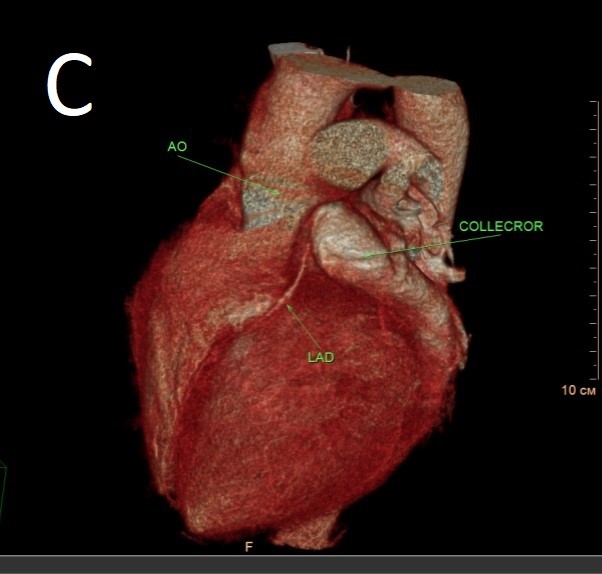 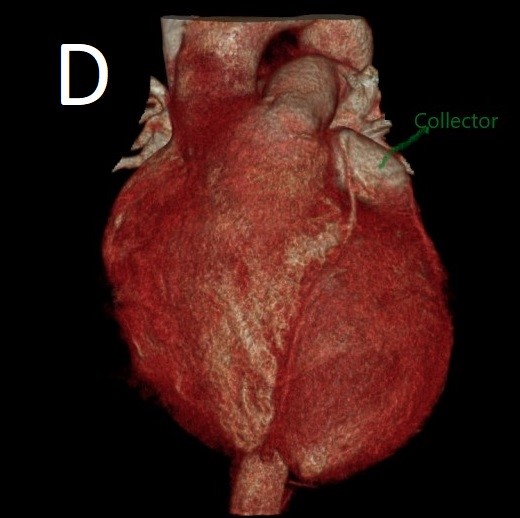 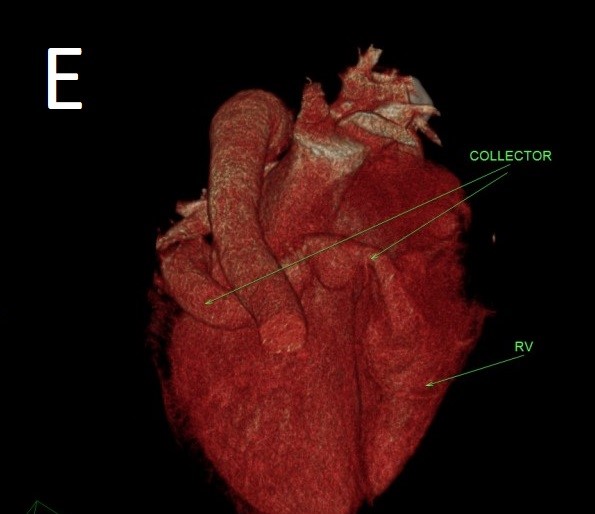 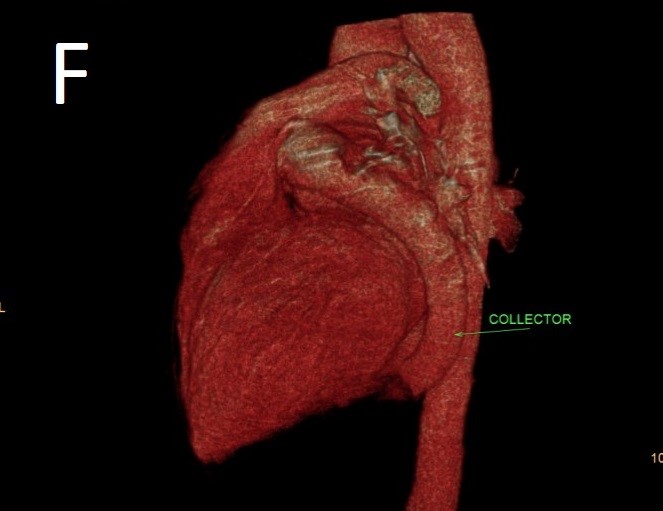 After the preparation and informed consent an open procedure has been performed: the distal portion of the aorto-right ventricular tunnel was sutured under cardiopulmonary bypass and normothermia. The ascending aorta was opened after aortic clamping. The tunnel orifice was detected at the left coronary artery normal disposition, about ​​25x30 mm in diameter. LCA originated 30-40 mm below the orifice; it was not possible to perform plastic surgery. It was decided to close the right ventricular end of the tunnel and access through RA. Tunnels orifice in RV was situated from the septal cusp papillary muscles of the RV, reached the fibrous annulus, and continued along to the commissure between the anterior and posterior cusps. Orifice was sutured with a continuous stitch and additional figure-of-eight plication on pledgets. There were no complications in postoperative period. After ten days, a repeated coronary angiography showed minimal residual flow along the posterior RV wall through an aorto-right ventricular tunnel. 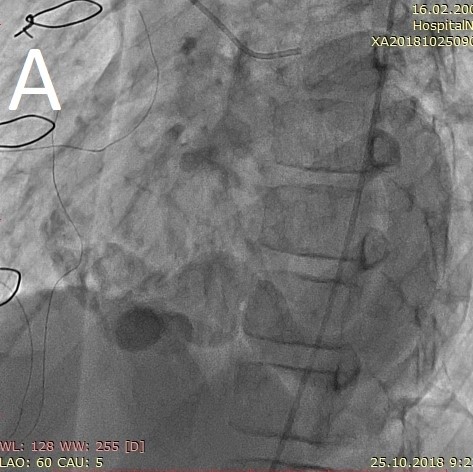 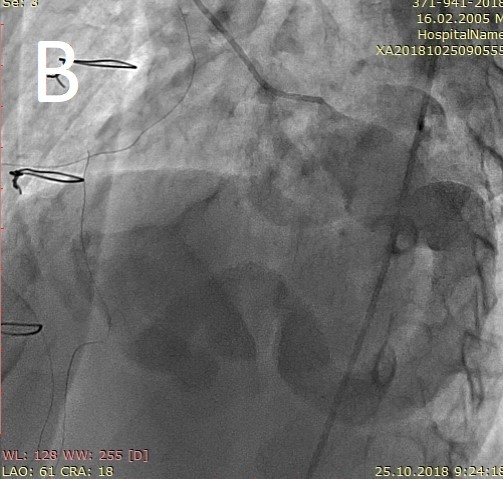 Figure 2. A, B - Angiography data 10 days after. There is functioning aorto-right ventricular tunnel, visualized  accumulation of contrast agent in stitches area in the right ventricle and flow through the suture.

After 6 months of follow up CT, angiography showed a residual empty space about 5 mm at the site of postoperative sutures. However, according to echocardiography data, RV dimensions were unchanged and pulmonary hypertension slightly decreased (RV 27 mm, Syst. PAP 35 mm Hg). That was considered as a positive effect necessitating the continuation of long-term follow- up and no need for additional intervention. 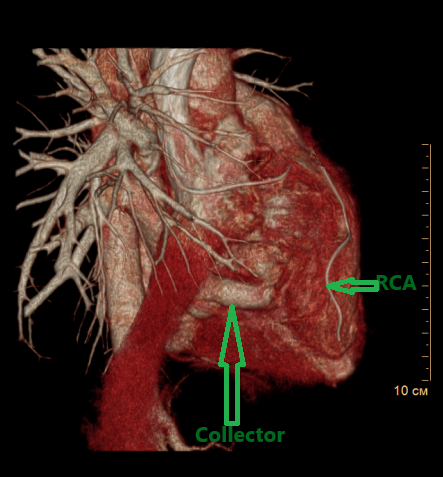 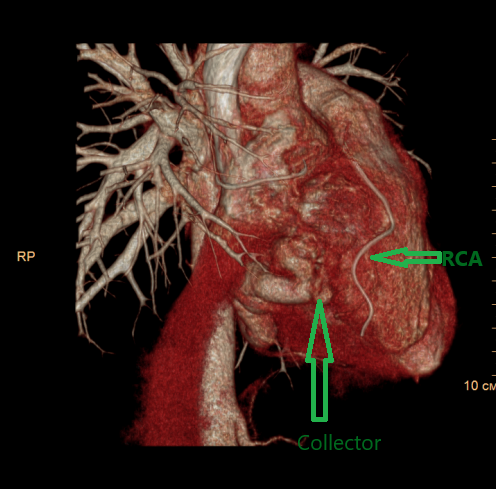 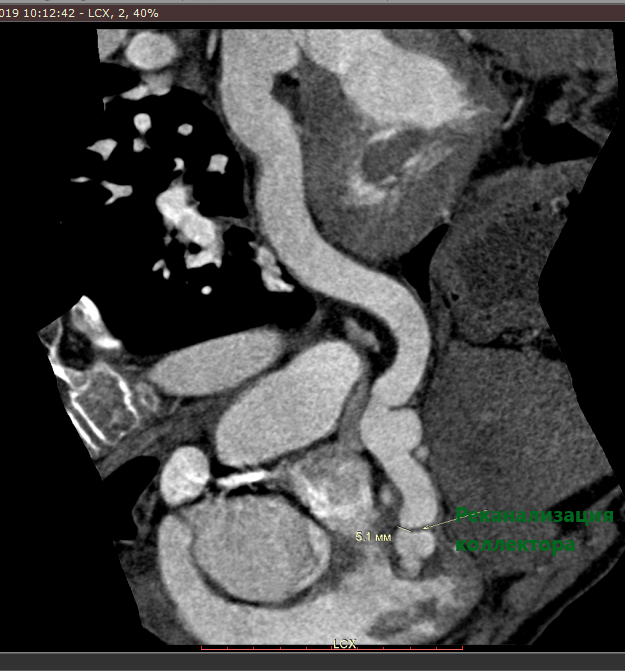 Hovaguimian et al. in 1988 proposed the classification of aortic ventricular tunnels (10). This classification includes 4 types: a simple tunnel with a slit like opening at the aortic end; no aortic valve distortion; a large extracardiac aortic wall aneurysm of the tunnel with an oval opening at the aortic end, with or without valvular distortion; intracardiac aneurysm of the septal portion of the tunnel, with or without right ventricular outflow tract obstruction; types II and III combined.

There are two types of surgical treatment of such pathologies: open surgery and endovascular transcatheter closure of the tunnel with special closure devices (1). The open techniques for the tunnels can include closure of the aortic opening either by direct suture or with a patch; closure of the ventricular end of the tunnel; obliteration of the tunnel and closure of both orifices (aortic and ventricular) (18).
In our case an open procedure was performed: the tunnel distal orifice closure, which was subsequently recanalized.

Conclusion: The aorto-right ventricular tunnel with the associated LCA anomaly is a very rare abnormality that is found in clinical practice. In our case, open surgical intervention was performed under cardiopulmonary bypass. The RV orifice of tunnel was sutured through the right atrial access. There is also an opinion about the opportunity of the distal tunnel portion closure with occluder implantation, which can lead to complete occlusion.