The paper presents the results of variability of indicators of the cardio-respiratory system in 24 children with bronchial asthma. Circadian recurrence of changes in bronchial obstruction, lung capacity, heart rate, beat and per-minute volume indicators have been established, which are necessary for the individualization of pharmacotherapy of bronchial asthma.

Cardio-respiratory system indicators may exhibit circadian variations in bronchial asthma (1-3). Chronopharmacology (4) has been widely developing. It  make possible not only to detect occurring changes at different stages of the disease to determine regulatory mechanisms, but also to look for ways to correct these abnormalities, by means of influencing pathological mechanisms in vivo and in accordance with existing rhythms (1,5).

Purpose of research: To establish the daily variability of the indicators of the cardio-respiratory system in children with bronchial asthma.

We have studied the daily variability of the functional state of the cardio-respiratory system in 24 children with bronchial asthma, aged 14-15 years. Measurements of the integral parameters, including heart rate (HR), cardiac stroke volume (CSV), cardiac output (CO), vital lung capacity (VC), and forced expiratory volume for 1 second (FEV1) were performed 6 times a day at intervals of 4 hours each. The functioning parameters were determined by methods of tetrapolar thoracic rheography and spirometry.

The analysis of the obtained material by the method of Cosinor-Analysis 2.4 for Excel 2000 / XP (2) made it possible to establish a relatively well-defined near-daily periodicity of indicators of the cardio-respiratory system in children with bronchial asthma who were in in-patient condition. The analysis of the circadian rhythm of the pulse showed that its circadian acrophase occurs in the morning hours - 6.46, with a confidence interval from 5.31 to 7.67 hours and an amplitude of 16 beats per minute (Table 1).

The acrophase shift in heart rate was more than 6 hours, compared to healthy ones. The indicators of CSV and CO are characterized by temporary synchronization, with their circadian acrophases occurring at 15-17 hours and are almost in the same time interval as indicators characteristic of healthy people. At the same time, a distinct phase shift and their circadian acrophases in relative antiphase were detected between the heart rate and the parameters of cardiac output) (heart rate - at 6 hours and 46 minutes, and CSV, CO - at 15-17 hours).

Analysis of indicators of the function of external respiration showed that the main ones of them (VC FEV1) change in phase, i.e. there is overlapping of confidence intervals for their acrophases, both among themselves and when compared with indicators characteristic of healthy people. However, the study of the circadian dynamics of the volume of forced output for 1 sec. revealed other patterns. So, in the daytime hours (7, 15, 19) the highest FEV1 values ​​were noted, and in the night hours (23.3) FEV1decreased to its minimum value (1.54 l.), i.e. there was an inversion of the circadian periodicity ratio with a minus sign (CPR = -0.9).

Therefore, indicators characterizing bronchial patency in the daytime turned out to be relatively high, and at night it was minimal, which should be taken into account when determining the time of prescribing therapeutic measures for bronchial asthma in children. 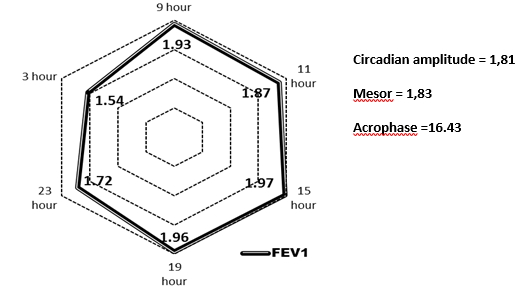 Figure 1. The circadian variability of the characteristics of the average FEV1 indices in children with bronchial asthma

Taking into account the synchronization ratio of functions, a certain relationship was established between the individual parameters of cardio-hemodynamics and indicators characterizing bronchial patency.

A comparison of the results of these two groups of parameters made it possible to establish the following regularities. The main indicators of cardio-hemodynamic activity of the heart (CSV and CO), pulmonary volumes, airway conductance (FEV1) were interrelated, which was confirmed by the proximity of their circadian acrophases in one time sector (during the daytime in the time sector of 14-15.3 hours). At the same time, the maximum value of the heart rate and the volume of forced output in 1 sec. were in different circadian time sectors (for heart rate -7 hours, against 12-17 hours for FEV1).

The circadian dynamics of bronchial patency indicators was characterized by its deterioration at night with the minimum values being at 23 and 3 a.m., while the highest average values ​​of this indicator were at 15 and 19 hours (Fig. 1).

It should be noted that, along with well-defined circadian biorhythms with periods equal to 18-28 hours, our studies revealed usually “hidden” cyclic components with periods relatively smoothly changing in at least the following four time ranges: 8,9,10 12 hours. These “hidden” cyclic components of various parameters for all four-time ranges are comparatively synchronized with similar circadian components.

Thus, the obtained research results testify to the presence in the body of children with bronchial asthma of a clear daily (circadian) biorhythm of the parameters of the cardio-respiratory system, which is consistent with previously established facts (3, 6). At the same time, a comparison of the dynamics of the circadian rhythms of the indicators of the cardio-respiratory system in children with bronchial asthma and healthy ones revealed their difference in acrophases, amplitudes, and average circadian level of parameters.

The main indicators of cardio-hemodynamics (CSV,CO) and airway conductance parameters are interconnected, which is confirmed by the close proximity of circadian acrophases in one time sector, as well as by overlapping of confidence intervals, while some indicators are in relative antiphases (heart rate and CV, FEV1), which may indicate some inconsistency in their functions.

Conclusion: When optimizing and choosing the time of pharmacotherapy, it is advisable to take into account information about the system most requiring relevant correction, the increase in activity of which is possible and necessary in the process of restoring impaired functions. As the main rhythm marker, we recommend considering the state of airway conductance, since the stimulation of bronchodilation mechanisms in children with bronchial asthma is pathogenetically substantiated.

Authorship:  O.U., V.A. equally contributed to the study and preparation of manuscript