During follow-up period, mortality event was observed in 16 (7.84%) patients. Survival function probabilities of patients and rational risk factors of survival functions were evaluated by Kaplan-Meier and Cox regression analyses, respectively. According to Kaplan-Meier results survival probabilities calculated for 1st year: 0.96 (0.014), for 3rd year: 0.94 (0.018), for 5th year: 0.86 (0.04), for 7th year: 0.75 (0.10). Among age groups 28-39 age ranges prevailed by 11 patients. Nevertheless, that difference did not show statistical significance: p˃0.322. The intensity of transplantation also analyzed according to years, which revealed increasing in numbers of operations by time. For instance, when in 2006 only two cases were registered in our center, but numbers of transplanted patients reached up to 48 in 2015. The association of mortality states and years of transplantation found significantly by Kaplan-Meier test (Breslow p˂0.001). The survival analysis was compared according to countries and revealed significant results (Breslow p˂0.05). From other factors influencing mortality, sex did not show strong impact on survival by Kaplan-Meier analysis, but significant association was found by Cox regression analysis.

The graft transplantation has been used in kidney failure as reliable and effective treatment option since 1936 (1). Studies show the increase in survival rate by transplantation in comparison to hemodialysis (2-4). On the background of technological modernizations, surgical achievements, survival improvements the transplantation was further motivated by healthcare institutions. Intensive demands, appropriate donor challenges and other factors led to the development of high-income economic sector in transplantational management (5). This situation is expressed with the concept of transplantation tourism. The approximate cost of kidney transplantation is $18,000 in India, $32,000 in Nigeria (the most active center), $78,000 in the UK and $117,000 in the US (6). If the transplantation was achieved by several countries in 1960s, now it is performed by vast majority of centers. It is stated that this number is around 80 (7, 8). The Transplant Society and the International Society of Nephrology state, that despite the Istanbul Declaration, which was approved by more than 110 professional and governmental organizations in 2008 for the prevention of crime in transplantation and the prevention of illegal programs, is still not known to what extent the situation is controlled (9).

A total of 204 patients operated in various 8 countries were included to our study: 142 (69.6%) males, 62 (30.4%) females. Mean age was 38.0 (0.89) years, median 34.0 (12.7) years. Conservative treatment at 1st year after transplantation was started in corresponding country where the patient was operated. After the 1st year of procedure, treatment and follow-up was continued by our clinic. We excluded from analysis rejections and complications, mortality cases during the 1st year of follow-up. Differences of survival by operated countries, by transplantation years, by age and gender groups are investigated in this study.

As seen from Table 1, out of 204 patients 16 (7.8%) died, whereas other 188 are surviving and by statistical description, they belong to censored state. 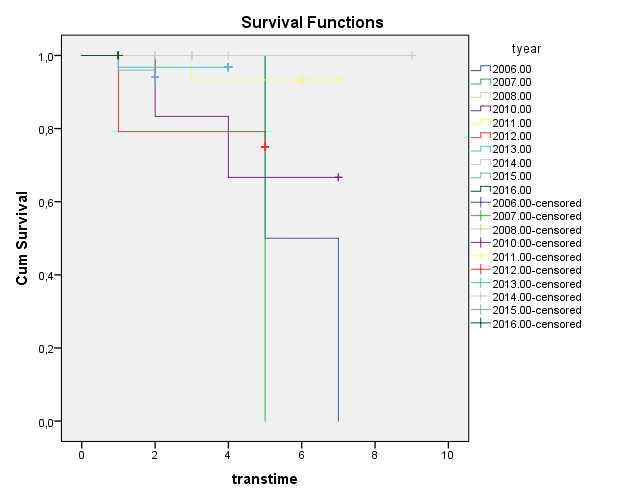 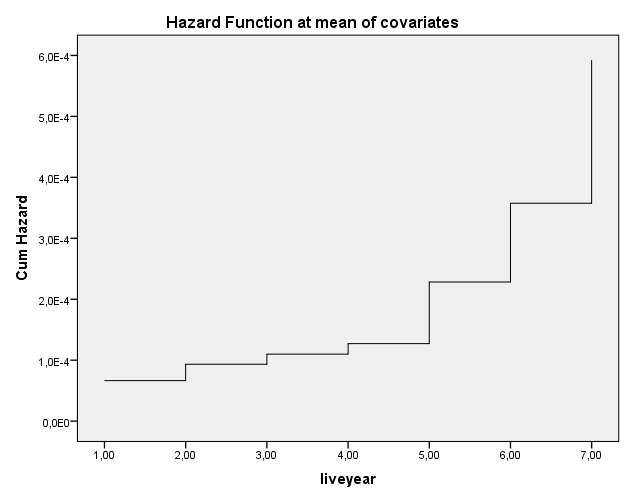 Relationships of considered independent factors of mortality were analyzed by Cox regression test.

Not only preoperative and postoperative medical predictors, but donors, operating centers and countries, age, gender, ethnical and other factors also included in these studies (2, 11-16).

If we mention about impact of sex and age on survival, despite the insignificant results of Kaplan-Meier analysis, both Cox regression and logistic regression analyses identified them as statistically strong factors in our research. Compared to Neri’s study, where mortality increased by over 60 years old (15), mortality in our study was not observed in 17 patients elder the 60 years. The high mortality frequency was registered as 11 patients (68.75%) in 28-39 age group. This result is similar to the study on survival after transplantation in Canada and United States (2). Both Cox and logistic regression tests revealed strong association of decreased of mortality rate and male gender. Nevertheless, according to Nyberg and associates, gender did not implied effective role on mortality (14). Contrarily, Chen et al stated the significant difference of survival in gender comparison (13). This point can be explained by some social grounds rather than medical reasons and it also requires further evidence-based investigations.

In the initial years, if renal transplantation was performed by certain countries, in time, procedure spread to much more countries and medical centers on the background of improved surgeries and positive outcomes. According to some thoughts, expansion of financial aspects of transplantational management is alarming (6).

One of other factors of current problem is the increasing the number of candidates for transplantation regarding to propagation of procedure on the level of countries. Number of patients visiting our clinic is steadily increasing as seen from Table 3. The main purpose of our study directed to analyze the presence of difference in patient loss by transplantation years and operating countries. Where the Kaplan-Meier analysis showed transplantation years as significant factors (Breslow p˂0.05), both regression tests did not give meaningful results. When the analysis of operating country conducted, both Kaplan-Meier and regression tests demonstrated significant mortality factors in case of three countries (Pakistan, Kyrgyzstan and Tajikistan). The result can be associated with various factors. Thus, it can be explained by versatility of factors on survival of transplanted patients both in preoperative and postoperative periods. Several studies devoted to post-transplant survival comparisons in numerous countries around the world. In a study, survival conditions between the USA and Canada, significant differences were found between the two countries after the first year of transplantation (2). Factors influencing the frequency of mortality in this age group may also be subject for debates. In a study of survival differences of 622 patients at different transplantation centers in different countries in Europe, multivariate analysis between countries and centers showed that the risk of mortality increased four-fold for low to moderate risk patients and 1.6-fold for the medium to high risk group (12). Including the pre-transplantation workup and management, detailed studies are required in order to investigate the patient loss in these countries.

On the other hand, the cumulative survival rate of patients receiving post-transplantation treatment in our center is high at 1 and 5 years, considering survival in other countries (16).

To sum up, despite the high frequency of mortality, which is considered due to preoperative and intraoperative issues, Kyrgyzstan is presented by high survival rate for 10 years by 92.8% in posttransplanted patients. In this case, it may be effective management for the patients to return our center after the transplantation where they underwent, as well as the dynamic follow-up in well-being natural conditions. This point must be approved by evidence. Notwithstanding, mortality challenges in aforementioned countries necessitates further investigations of procedural facilities and methods to find out exact factors.

Authorship:  Zh.G.,  Zh. A., D. A., F. K. equally contributed to study and preparation of manuscript