1SRI of Cardiology and Internal Medicine

3National Center of Surgery by AN Syzganov

We presented a clinical case of surgical treatment of gigantic left atrium in longstanding mitral regurgitation due to mitral valve disease diagnosed 23 years ago (patient refused surgery and was on medical treatment) and complicated by atrial fibrillation. The patient was referred for surgery with complaints on severe dyspnea on minimal exertion, weakness, fatigue, palpitations and massive leg edema. Diagnosis was established using electrocardiography, chest X-Ray, transthoracic and transesophageal echocardiography, and computed tomography. The patient underwent mitral valve replacement, tricuspid valve annuloplasty and left atrial reduction surgery (atrioplasty by Kawazoe). After surgery, left atrial volume decreased from 813 ml to 294 ml and antero-posterior size from 11.2 to 6.2 cm. The patient was discharged on 8th day after surgery. Control examinations after 6 months and 1 year showed reduction of left atrial volume (319 ml and 294 ml); patient feels well and has no complaints.

Thus, our case demonstrated reduction of left atrium early in postoperative period and its slow reduction after surgery during 1 year. It is also showed human reserve capacity and possibility of left atrial dilatation to such sizes. Late diagnosis of such changes in heart is possibly related to the fact that patient was afraid to see doctors and undergo surgery. The left atrial cavity size determination can be done intraoperatively using method of surgical glove we suggested.

Giant LA or atriomegaly is a result of longstanding pressure or volume overload of cardiac chamber, and most frequently is due to mitral regurgitation (5). For the diagnosis of a ``giant left atrium`` we accept antero-posterior size of LA >8cm measured from parasternal  long-axis view on transthoracic echocardiography.   This condition has significant hemodynamic effects and requires specific treatment.

Many authors proved, that correction of atriomegaly positively influences early and late postoperative periods, and prognosis and survival of such patients are improved  (7, 8). Accordingly, during last years,   surgical treatment of patients with mitral valve disease, atriomegaly and atrial fibrillation (AF)  has received new development and foresees complex approach directed not only at removal of actual valve pathology, but also treatment of complications caused by mitral valve disease.  For the first time in 1967, Johnson et al. (9) reported use of LA  wall plication for reduction of its size. Further, different modifications of plication stitching and application of redundant atrial wall resection have been suggested (10, 11).

A 60-year-old female patient was admitted to National Center of Surgery by AN Syzganov for surgical treatment with complaints on severe dyspnea on minimal exertion, palpitations, weakness, fatigue and leg edema.  She has had history of mitral valve disease and permanent AF for 23 years. Earlier she refused recommended surgical treatment and received medical treatment. She had no history of diabetes, hypertension, overweight or obesity (she had normal body mass index), family history of coronary heart disease or alcoholism. She was a non-smoker.

On physical examination, she had weakened first heart sound (S1), apical pansystolic murmur radiating to the left axillary area and under left scapula.  The second heart sound was accentuated over pulmonary artery.  The liver edge was palpated 5 cm below costal margin. She had edema of lower extremities up to knee level. 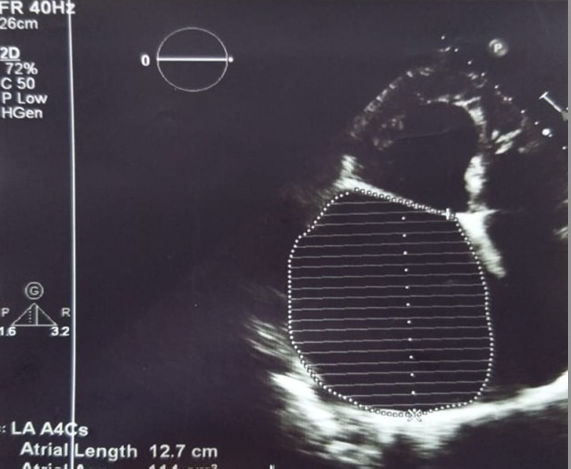 On chest X-ray (Fig. 2) anteroposterior view, heart was significantly enlarged in diameter. Left contour of cardiac shadow merged with thoracic wall (cor bovinum), waist was absent, 2nd  and 3rd arcs moderately bulged out (3>2). On the 1st oblique lateral view there was the 3rd degree of retrocardiac space narrowing, esophagus (barium esophagram) inclined over big radius arc (>8 cm), conus pulmonalis bulged out. On the 2nd oblique lateral view there was enlargement of left and right cardiac chambers. Aorta was without changes, pulsation was preserved. Cardiothoracic index was 0.77.

Thus based on evaluation, the patient had class I indications for mitral valve surgery, as giant LA was associated with mitral valve disease with signs of severe mitral regurgitation (12). She was symptomatic and had left ventricular  dysfunction. 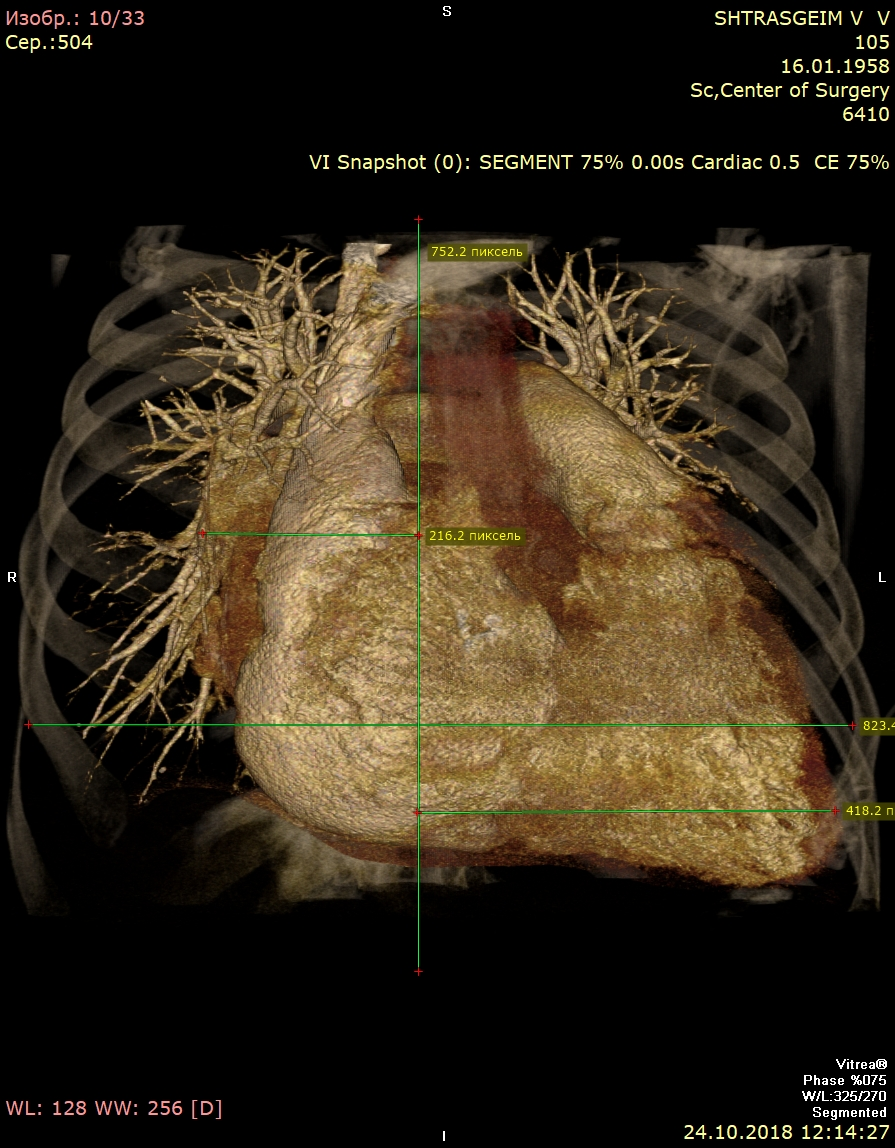 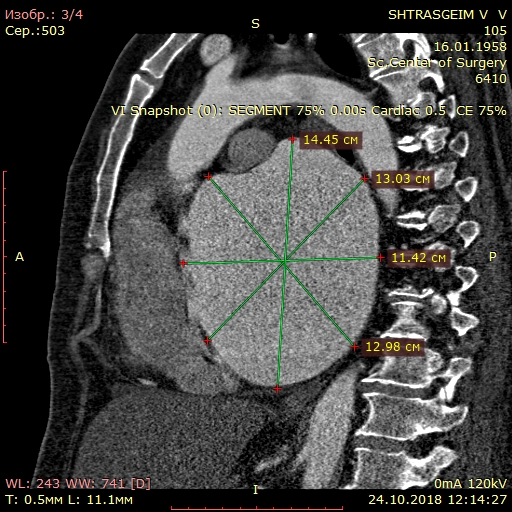 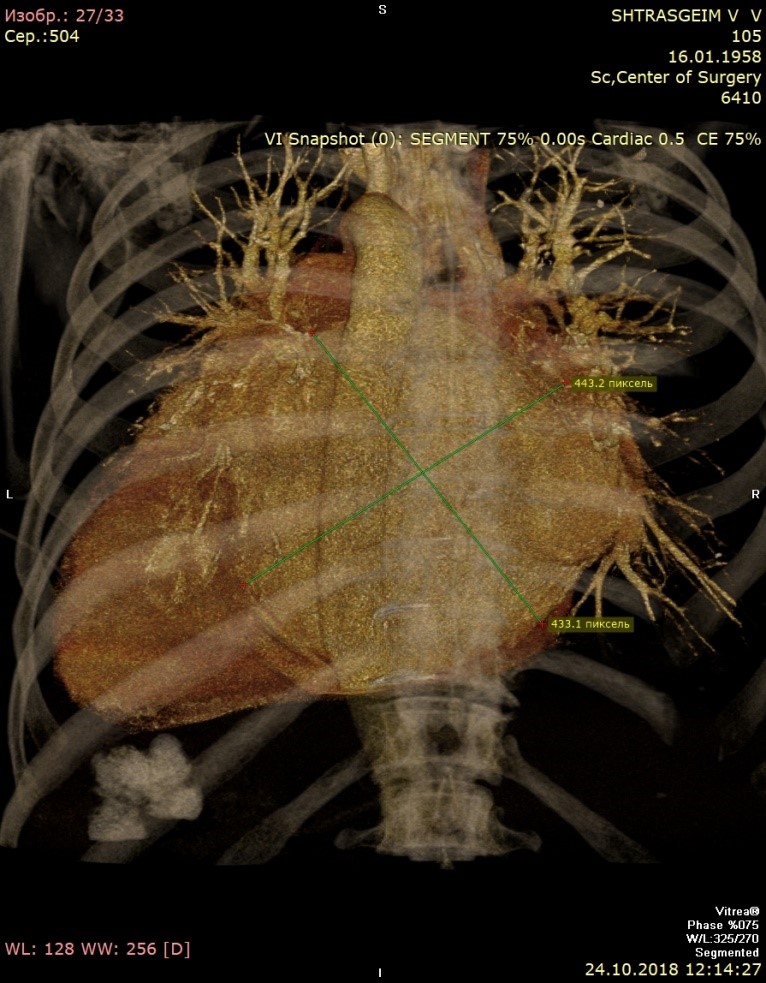 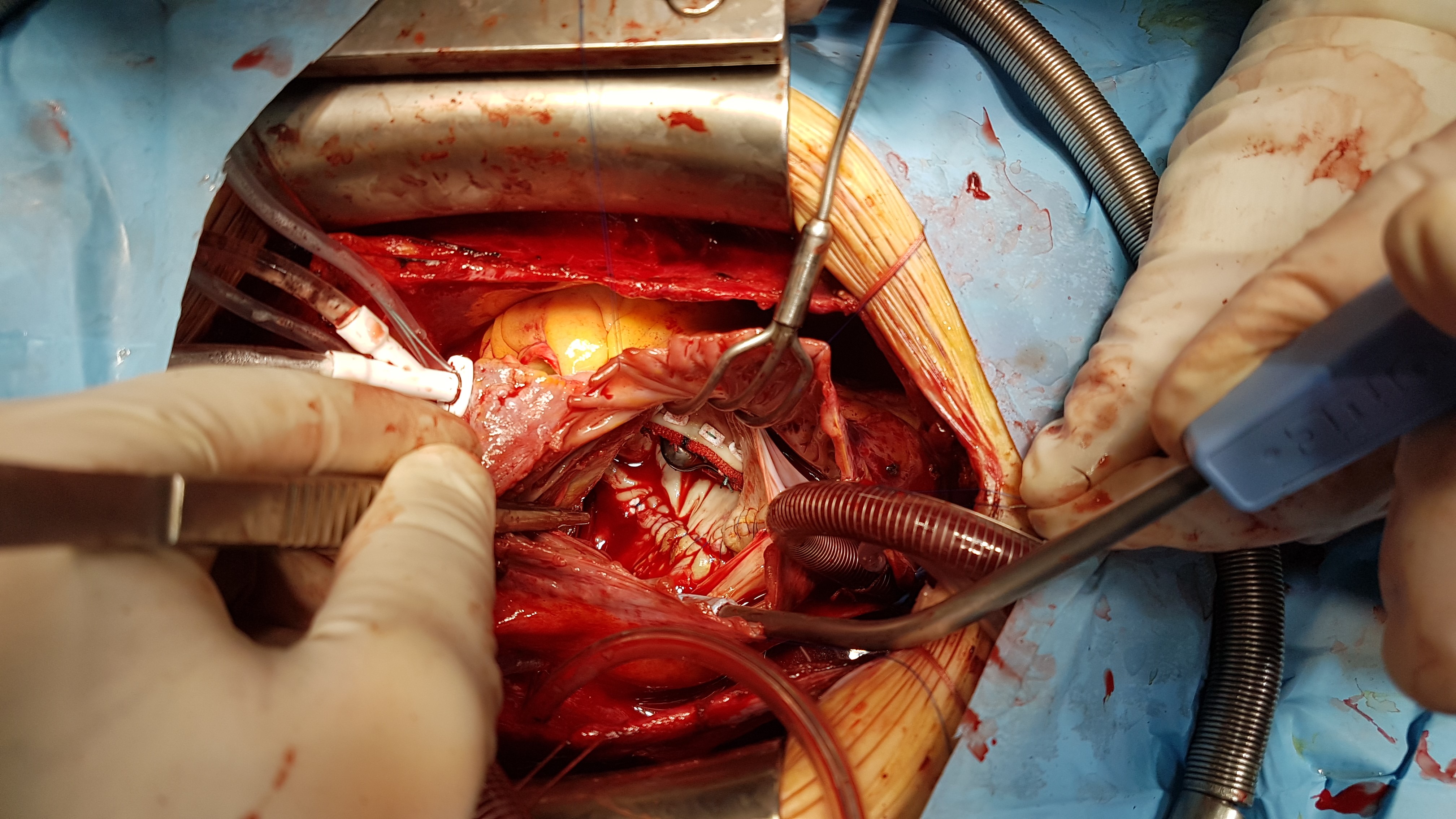 Figure 4. Replacement of mitral valve by mechanical prosthesis St.Jude N33 with preservation of posterior leaflet and atrioplasty by Kawazoe 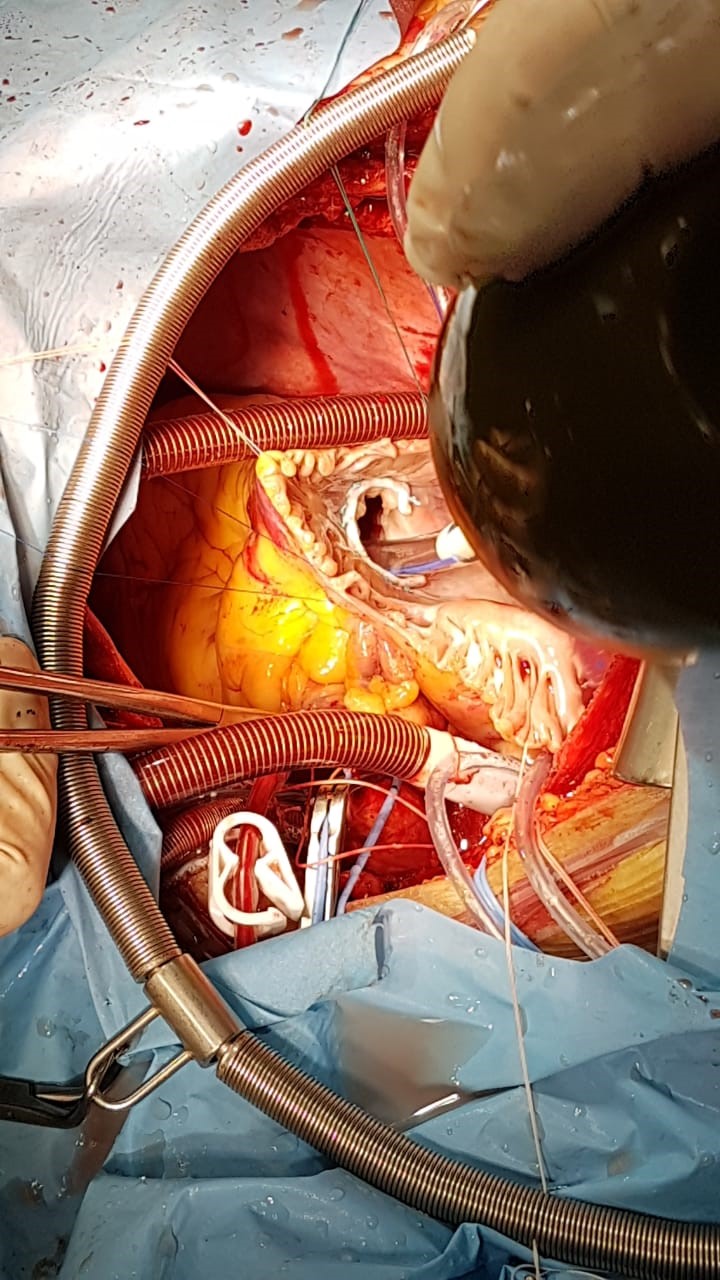 Then we used a new method of intraoperative LA  volume measurement (developed by authors - Patent 19776 20.02.2007) and determined that before atrioplasty LA cavity could accommodate 990 ml of saline and after atrioplasty – 400 ml.  Method is used as following: measurement of LA volume is performed before and after correction of mitral valve disease (Fig. 7). With this aim, rubber container prepared from rubber surgical glove (2) is introduced in LA (1) through incision in IVS (3). Sterile surgical glove (2) is connected to polyvinyl tubes (4) and is fixated by ligature. Saline is administered through one tube using 100 ml syringe (5) and the air is removed from glove through another tube.  When the liquid will flow from the second tube, it is necessary to block it and continue administration of saline up to maximal size. Maximal quantity of liquid in the rubber container located in LA  will determine the LA  volume. 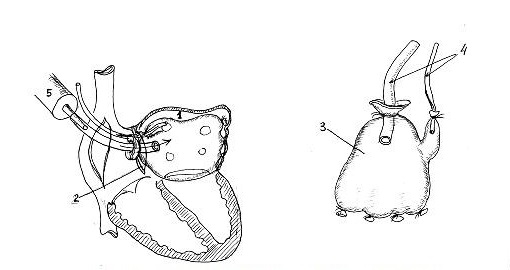 Patient`s postoperative period was without complications. She was extubated in early postoperative period. Postoperative echocardiography demonstrated normally functioning mitral prosthesis, reduction in size and volume of cardiac chambers (antero-posterior size of LA  of 6.2 cm and left atrial volume of 312 ml,) and reduction of RVSP – 27 mm Hg. The patient was discharged on 8th day after surgery. 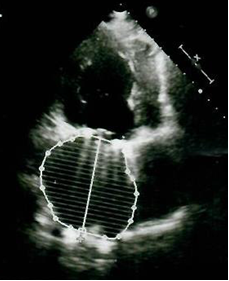 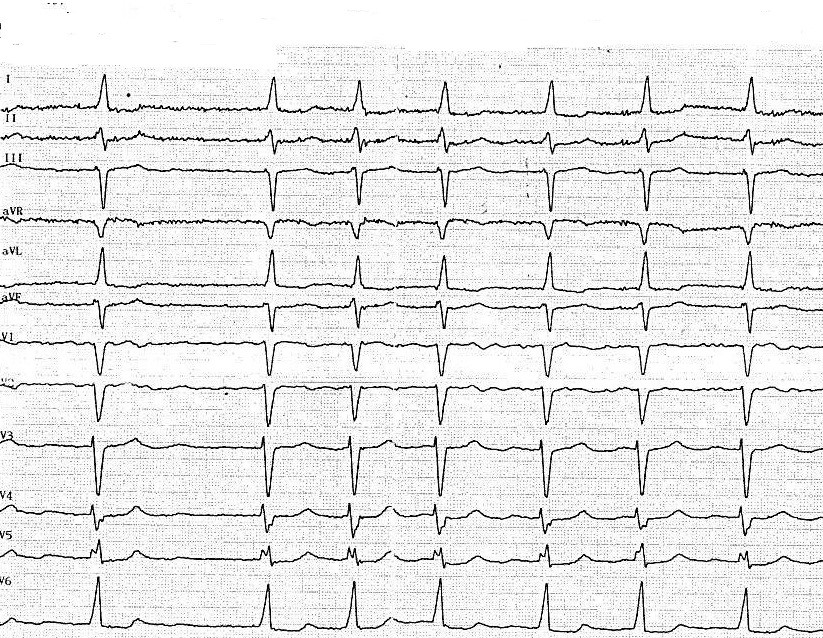 Thus, there were the further reduction of LA volume, reduction of LV size and marked reduction of RVSP on control echocardiography 6 months and 1 year after surgery. As a result, left atrial volume reduced by 2.8 times from 813 ml to 294 ml. Rhythm is AF. The patient feels well, without any complaints. 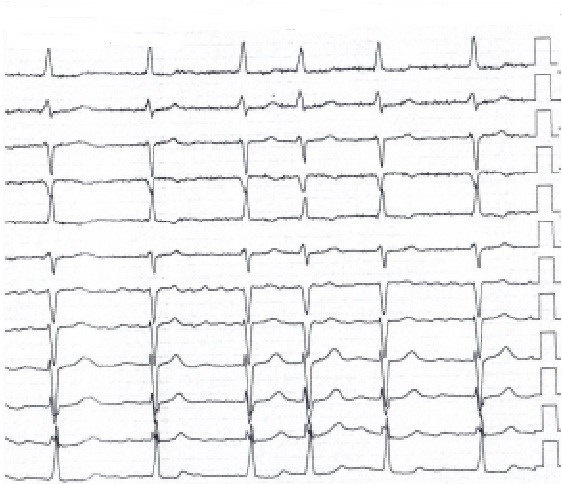 Currently, giant LA is a rare entity. It is present in 19% of patients requiring surgical correction of mitral regurgitation (6).   Among the factors, contributing to development of giant left atrium is the long-standing severe MR without surgical correction.  Our case was remarkable by 23-year history of mitral valve disease and severe MR. She was offered mitral surgery before but refused it. It is important to remember that mitral valve surgery is indicated in symptomatic cases with severe MR and  asymptomatic cases with severe MR in presence of LV dysfunction LVEF<60%, and LV ESD>4 cm (12). Our patient was symptomatic and had LV dysfunction (LVEF=58% and LVESD =4.7 cm) on presentation.

The clinical manifestation of giant LA includes the symptoms of compression of LV posterior wall and compression of left bronchi and lower lobe of right lung (7, 10, 13).  However, these symptoms were absent in our patient.

The diagnosis is usually established using echocardiography (2, 3), and increased cardiothoracic ratio on chest X-ray (>0.7) (2). It is sometimes impossible to make a correct diagnosis of LA enlargement using only chest X-Ray, as it may be misdiagnosed as massive tumor or pleural effusion (13). The diagnosis of gigantic LA in our patient was established using echocardiography (LA size 11.2 cm) and computed tomography, she had also increased cardiothoracic ratio  (0.77) on chest X-ray.

The aim of surgical operation in our patient was correction of mitral valve disease and reduction of giant left atrium to prevent thromboemboli and progression of heart failure.

There are several methods in arsenal of surgeons (13- 15), aimed at correction of atriomegaly. Some methods are complex enough, other are not efficient in reducing of markedly enlarged atrial volume. Some surgeons do not see the need in correction of atriomegaly and prefer not to perform additional manipulation considering this prolongs aortic cross-clumping time and cardiopulmonary bypass time.  At the same time, as many authors showed (2, 8), removal of only valvular pathology in patients with atriomegaly does not lead to significant reduction of LA size and volume.

Evaluating direct result of operative treatment, all surgeons give importance to restoration of hemodynamics, and absence of compression of surrounding tissues by enlarged LA. Moreover, reversibility of complications developed before, during and after operation is taken in account.

In patients with giant LA  and AF, atrial reduction surgery with concomitant surgical ablation of AF were shown to successfully restore sinus rhythm (13, 16, 18). We did not consider rhythm control of  AF in our patient, due risk of perforation of markedly enlarged left atrium, taking in account opinion of Kosakai et al. (18) on 100% efficacy of surgical ablation of AF in LA diameter <45 mm and its absolute inefficacy when LA diameter is more than 85 mm. We should also mention that our patient had 23-year history of permanent AF.

Conclusion:  Thus, our case demonstrated reduction of giant left atrium early in postoperative period and its slow reduction after surgery during 1 year in longstanding mitral valve disease and MR. It is also showed human reserve capacity and possibility of left atrial dilatation to such sizes. Late diagnosis of such changes in heart is possibly related to the fact that patient was afraid to see doctors and undergo surgery. The left atrial cavity size determination can be done intraoperatively using method of surgical glove we suggested.