In 2007 he was re-admitted to hospital with NSTEMI following clopidogrel cessation. CA revealed ST within his RCA stents with significant positive remodeling. Thrombus aspiration only was performed and clopidogrel was restarted. 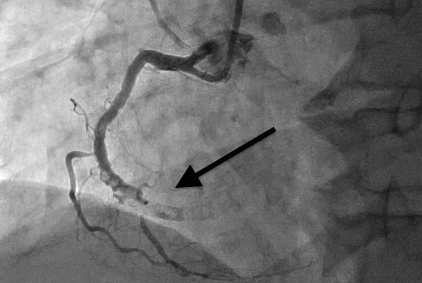 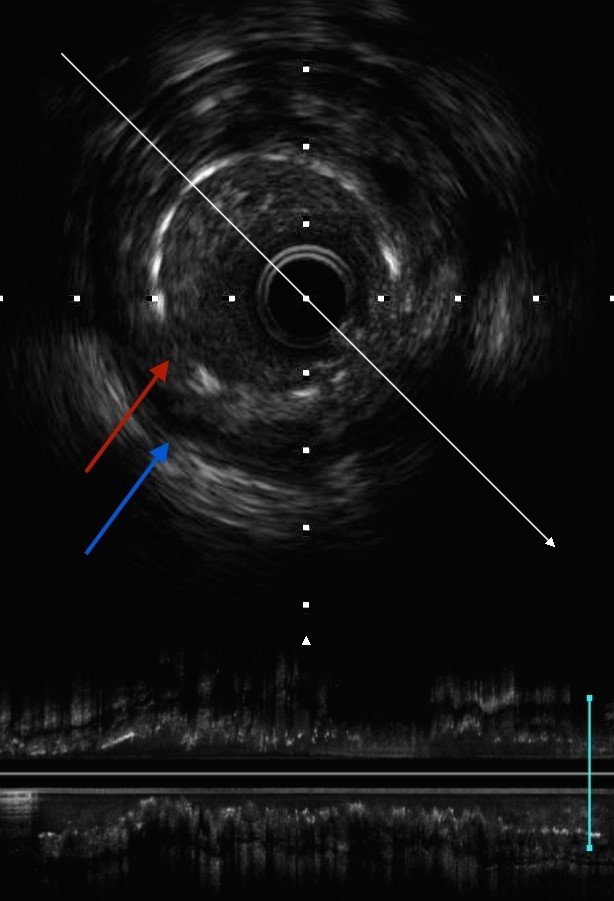 Figure 2. IVUS examination of the stented portion of the vessel (from Image 1) revealing significant positive remodeling of the artery (blue arrow) away from the stent (red arrow) resulting in malapposition.

A 72-year old man suffered an inferior STEMI in 2004. CA revealed a severe mid RCA stenosis and a TAXUS DES was deployed. Aspirin, clopidogrel and secondary prevention medication were commenced and continued indefinitely, for unclear reasons.

Stent length is positively correlated with the rate of ST and risk of major adverse cardiovascular events (3). The stented segment in case 1 is 72 mm, putting the patient at higher risk of both outcomes.

Incomplete stent apposition (ISA) hampers endothelialisation and is an independent risk factor for ST. Positive arterial remodeling (a regional increase in the radius of the external elastic membrane) is the main cause of ISA and was demonstrated well in case 1. Animal studies show the inflammatory response to a DES (the major cause for positive remodeling) peaks after the eluted drug has been completely released (4) suggesting exposure to the stent polymer or the lack of drug elution as the cause. Registries suggest lower rates of VLST in newer generation DES, compared to older models, such as the TAXUS stents used in our cases (5). This relates to the polymer used, strut design and type of eluted drug. Additionally, resolution of jailed thrombus, insufficient neointimal hyperplasia and chronic stent recoil has also been implicated in ISA.

Stent under expansion is another risk factor for ISA and ST. In case 1, IVUS showed a vessel diameter of 3.5mm (excluding remodeled segments) with the stents originally being deployed to 2.75 and 2.5 mm.

Case 1 and case 2 demonstrated VLST at 11 years from in-stent restenosis and plaque rupture in the setting of antiplatelet discontinuation. Antiplatelet cessation is the major predictor of both early and late ST. The mean time to ST following cessation of aspirin monotherapy in first generation DES is 7 days.

Patients with observed positive remodeling in relation to a coronary stent should be considered at high risk of further ST and long term dual anti-platelet therapy should be considered. Polymer-free drug eluting stents or bio-absorbable stent scaffold, may theoretically offer a solution, however more long term efficacy data is needed given similar rates of ST after 16 months (6). These cases also illustrate the utility of IVUS, in defining pathology as well as directing definitive treatment.

The cases highlight the need for suspicion of VLST when patients with a prior history of PCI present with STEMI, even beyond ten years following initial PCI, especially if ST has occurred previously.

Authorship: S.L. and M.L. equally contributed to management of case and preparation of case report.

Informed consent of patients was obtained before procedures.