Infective endocarditis (IE) is a disease of high mortality and morbidity, despite advances in diagnosis and surgical treatment (1-4). An important complication is acute heart failure due to severe valvular regurgitation, especially of the mitral and aortic valves. In addition, systemic embolization resulting from left-sided endocarditis, especially to the central nervous system, is a feared complication (5-7). Coronary embolization is a rare but also potentially extremely serious complication of IE (5-7). Most septic coronary embolization occurs in the left anterior descending artery (8-10). The highest incidence of this complication is seen with involvement of the anterior mitral valve leaflet; aortic valve vegetations, on the other hand, generally do not embolize to the coronary arteries due to the short distance from the coronary ostium (5). Fragments from the valvular vegetation may dislodge and occlude the coronary arteries, causing an abrupt decrease in perfusion to provoke myocardial infarction (7).

A 37-year-old black male, hypertensive and heavy smoker, presented with a 4- month history of  exertional dyspnea and significant weight loss (15 kg in this time frame). In the last month, he had noticed night sweats and fever, arthralgia of both ankles, with subsequent migration to the right knee and wrists. He was seen in an acute emergency department and diagnosed with Chikungunya fever. The patient was treated with common analgesics and prednisone, achieving partial symptom improvement, but progressed to minimal effort-related dyspnea and paroxysmal nocturnal dyspnea.

One month before admission, he had a high-intensity, tight left chest pain with no radiation or other related symptoms. He sought medical attention again, and this time an increase in troponin levels was found. Electrocardiogram was reported as normal, but the original tracing was not available to us.

However, he had coronary angiography images, which showed an obstructive lesion in the distal marginal branch of the left circumflex artery (Fig. 1). 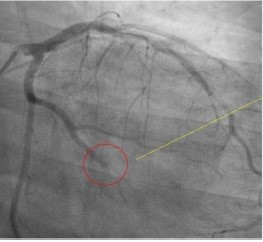 Two-dimensional transthoracic echocardiography performed showed a 1.0 cm vegetation in the aortic valve associated with severe valvular regurgitation. An empirical regimen of aqueous penicillin and gentamicin was initiated after collection of 3 blood culture sets. This regimen was maintained for 15 days, and then changed to ceftriaxone after blood culture results, which grew viridans group streptococci. Thoracic and abdominal computed tomography were performed and showed no changes. He was transferred to the Instituto Nacional de Cardiologia with the definite diagnosis of aortic valve infective endocarditis and ST-segment elevation changes of acute myocardial infarction (AMI), with a clear indication for surgical aortic valve replacement.

On admission, his physical examination showed he was dyspneic at rest, pale, thin, slightly tachypneic, and afebrile. Blood pressure was 130/50 mmHg, heart rate was 75 beats per minute.

Radial pulses were regular and full. Ictus cordis was palpable, and deviated to the left. A third heart sound was heard, as well as a 4 + / 6 + diastolic murmur in the aortic area and in the left parasternal border. Lungs were clear. Examination of his abdomen was unremarkable. No peripheral edema was seen.

Transthoracic echocardiogram (Fig. 2) showed an ejection fraction (Teicholz formula) of 66.9%; the right ventricle had normal size. The left ventricle (LV) was enlarged; there was moderate systolic dysfunction, and akinesia in the middle third of the inferior and inferolateral walls. The aortic valve was thickened, and a vegetation was seen on the ventricular aspect of the leaflet, 2.0 cm in its largest diameter, and a saccular image in the right coronary leaflet was noticed, thought to be a pseudoaneurysm (this was not confirmed at surgery, however).The mitral valve was thickened with moderate valvular regurgitation and there was mild tricuspid regurgitation. 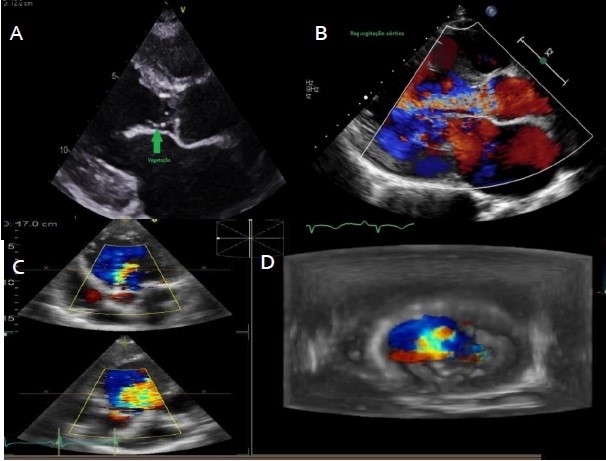 Figure 2. Transthoracic echocardiographic images A and B in left parasternal view show the presence of aortic valve vegetation with projection to the left ventricular outflow tract and color Doppler shows the aortic regurgitant lesion. In transesophageal and 3D sections , on C and D images respectively, demonstrating the degree of aortic insufficiency on Doppler echocardiography

Contrasted computerized tomography (CT) scans of the brain were normal; but abdomen CT scan showed images suggestive of embolization to the spleen (triangle shaped non-enhancing lesion on the upper segment), to the upper left kidney and to the lower pole of the right kidney. On the fourth day of hospitalization, he reported pain in the 4th right finger, and an Osler’s node was seen, as well as lesions in the hypothenar region of the left hand compatible with a Janeway lesion.

The patient underwent aortic valve replacement with a mechanical prosthesis n. 23 implantation on the 5th day of hospitalization. Surgical report described degenerated aortic valve with destruction of the right coronary leaflet, vegetations in all leaflets and severe aortic regurgitation. Histopathology of the valve showed areas of necrosis and mixed inflammatory infiltrate rich in neutrophils and the presence of bacteria, with evidence of active infective endocarditis. The patient was treated with ceftriaxone for 3 weeks after surgical valve replacement. New abdominal and pelvic CT scans performed at follow-up showed unchanged images, but as the patient was clinically stable, he was discharged home.

Metastatic endocarditis infection is commonly caused by virulent organisms, particularly Staphylococus aureus, beta-hemolytic streptococci and Candida spp; however, in the presented case, a relatively nonvirulent bacterium, a viridans group streptococcus, was the etiology (1-4).

The long time to establish a correct diagnosis, and the use of steroids (as Chikungunya fever was suspected) might have contributed to this.

Coronary artery embolism (CAE) due to displacement of fragments of valvular vegetation secondary to IE is rarely reported in the literature and its precise incidence is unknown (5-7). In an autopsy study, coronary artery microembolism was found in more than 60% of cases, but rarely resulted in transmural infarction (7). In a case series of patients with IE, the incidence of acute coronary syndrome, defined by the presence of chest pain associated with electrocardiographic changes and / or increase in enzyme markers was 2.9%; mortality was 64% in this subset of patients (6). In a literature review, Wenger and Bauer described 74 patients with known coronary embolism in IE. Two thirds of these died suddenly. The main embolic event was in the left anterior descending artery in 26 patients (35%), the left main coronary artery in 24 (32%), the left circumflex artery in 3 (4%), and the right coronary artery in 9 (12%). The authors emphasized the relative youth of the patients, who were mostly in their 30’s or 40’s, similarly to our patient (10). Mycotic coronary aneurysms are rarely observed in these studies. There is agreement as to the initial drug treatment, which should follow guidelines to all types of AMI.

However, regarding surgical treatment, the literature is scarce. Treatment with thrombolytics has been unfavorable and associated with a high incidence of complications.

In 1991, Herzog et al. were the first to report the use of balloon angioplasty for a septic coronary lesion (10). Of the 2 cases, one developed a mycotic aneurysm at the site of the infected embolic lesion days after the left anterior descending coronary artery angioplasty. The lesion was debrided and the vessel re-sutured (10).

Early percutaneous primary coronary intervention in AMI is considered superior to thrombolytic and, in the context of IE, it is a safer option. However, if the plunger is firm, as in the case of a vegetation, associated with a more compliant coronary wall without atherosclerosis, as in young people, remodeling after angioplasty may not be optimal and re-occlusion may occur after balloon deflation. In this case, the use of stents could prevent elastic recoil and sustain vessel patency (9). This treatment regimen, however, is challenging, since it contradicts the principle of surgery of not implanting foreign bodies in infected sites. In a case cited by Glazier et al., placement of a stent was performed in a coronary artery after the vegetation was judged to be sterile (antibiotic therapy for 3 weeks, afebrile patient and negative blood cultures documented 2 weeks before) (11). In another case, Beldner et al. implanted 3 stents in a vessel with a probably infected vegetation, in a patient with only 5 days of antibiotic therapy (12). Nevertheless, the patient, in a follow-up angiography after 1 year, was free of infection. As for the infected stent, the standard procedure is lesion debridement and stent excision (9). However, cases of stent infection have been successfully treated with prolonged intravenous antibiotic therapy, a strategy that may have been effective in preventing stent infection in the above patient.

Percutaneous primary angioplasty in the setting of a myocardial infarction due to septic embolism is not well established, and good results cannot be assumed as when the technique is performed in the treatment of athero-thrombotic disease, with possible complications, as described above. Technologies such as mechanical thrombectomy with distal protective devices may reduce the risk of distal embolization, but their use has not been proven in the context of endocarditis and septic embolization (8-9).

The coronary lesion treatment of the patient presented in our case was conservative, considering the distal anatomical position of the lesion, the understanding of the complexity, the risk assessment of approaching the lesion in view of the possibility of rupture, the elapsed time of the embolic event in the hospital of origin, besides the presence of well demarcated areas of akinesia on echocardiography.

Our case is interesting because of the AMI was the presentation of IE in a young man, and led him to seek assistance and eventually be diagnosed as definite IE. Also, the embolization site being the marginal branch of the left circumflex artery, as well as the origin of the vegetations being the aortic valve, makes this case unique. Although coronary embolism complicating bacterial endocarditis was first described by Virchow in 1856 (10), it remains a rare condition.

Presentation of an acute coronary syndrome related to infective endocarditis is rare but potentially lethal. For young people, acute myocardial infarction and an infection syndrome should lead us to suspect IE. Definitive treatment is complex, with little experience published in the literature, and the consensus is that it needs to be individualized, considering the age of the patient, the anatomy of the coronary lesion and the resources available for treatment. Proper antimicrobial treatment reduces the risks of embolization, but in the presence of severe aortic valve regurgitation, valve replacement surgery is crucial. 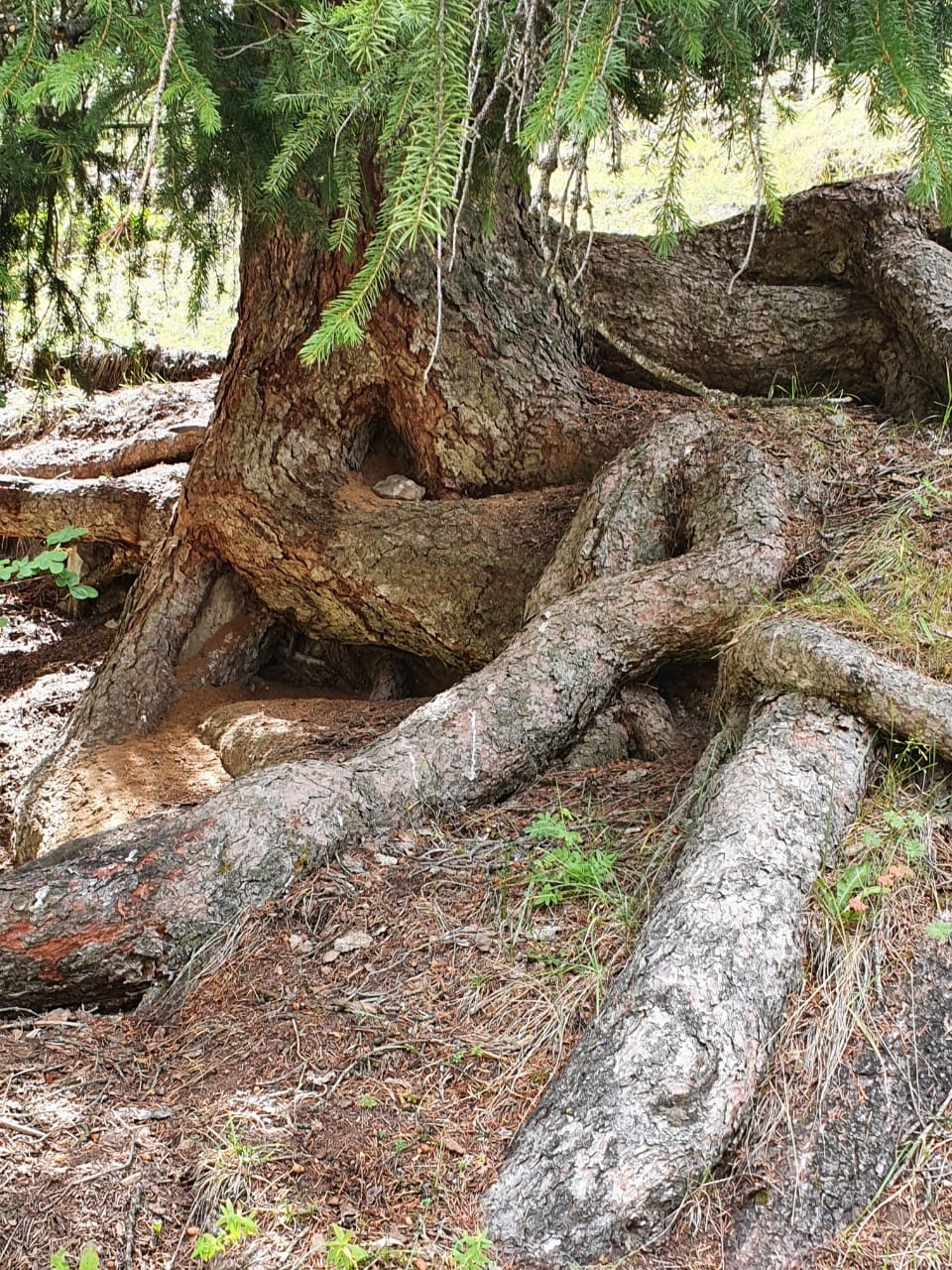