Usually patient may develop scar-related atrial flutter after left atrial ablations to treat atrial fibrillation and other types of atrial tachycardias. The most common reason for postablative atrial tachycardias is the gaps in the ablation line. However, in some patients atypical atrial flutter may develop in patients without prior cardiac ablations. In such cases, they may be related to the areas of spontaneous left atrial scarring.

We describe a case report of a patient with atypical left atrial flutter with areas of spontaneous left atrial scarring.

The current EP study was performed under the guidance of CARTO 3 navigation system (Biosense Webster Inc., Irvine, California). The scar was defined as an absence of recordable electrical activity or bipolar voltage amplitude of ≤ 0.05 mV. A decapolar diagnostic catheter (Biosense Webster, CA) was inserted into the coronary sinus through the right femoral vein. For the navigation and ablation SmartTouch catheter was used (Biosense Webster, CA). The cycle length of the atrial flutter was 206 ms (Fig. 2). The right atrial activation map was made. The earliest activation was revealed in the interatrial septum and the right atrium was passively activated. Then under the fluoroscopic guidance transseptal puncture was performed using BRK-1 transseptal needle. During activation mapping, a dual-loop activation pattern around mitral annulus involving scare area adjacent to the valve and another scar area was seen (Fig. 3).

The critical isthmus of the atrial flutter detected between the two separate scar areas localized in the anteroseptal part. Entrainment mapping was not performed to avoid degeneration of the tachycardia into the atrial fibrillation or its transformation. The width of the critical isthmus was 23 mm. COHERENT algorithm used in CARTO 3 system helped to visualize the dual-loop mechanism of the arrhythmia (Fig. 4). 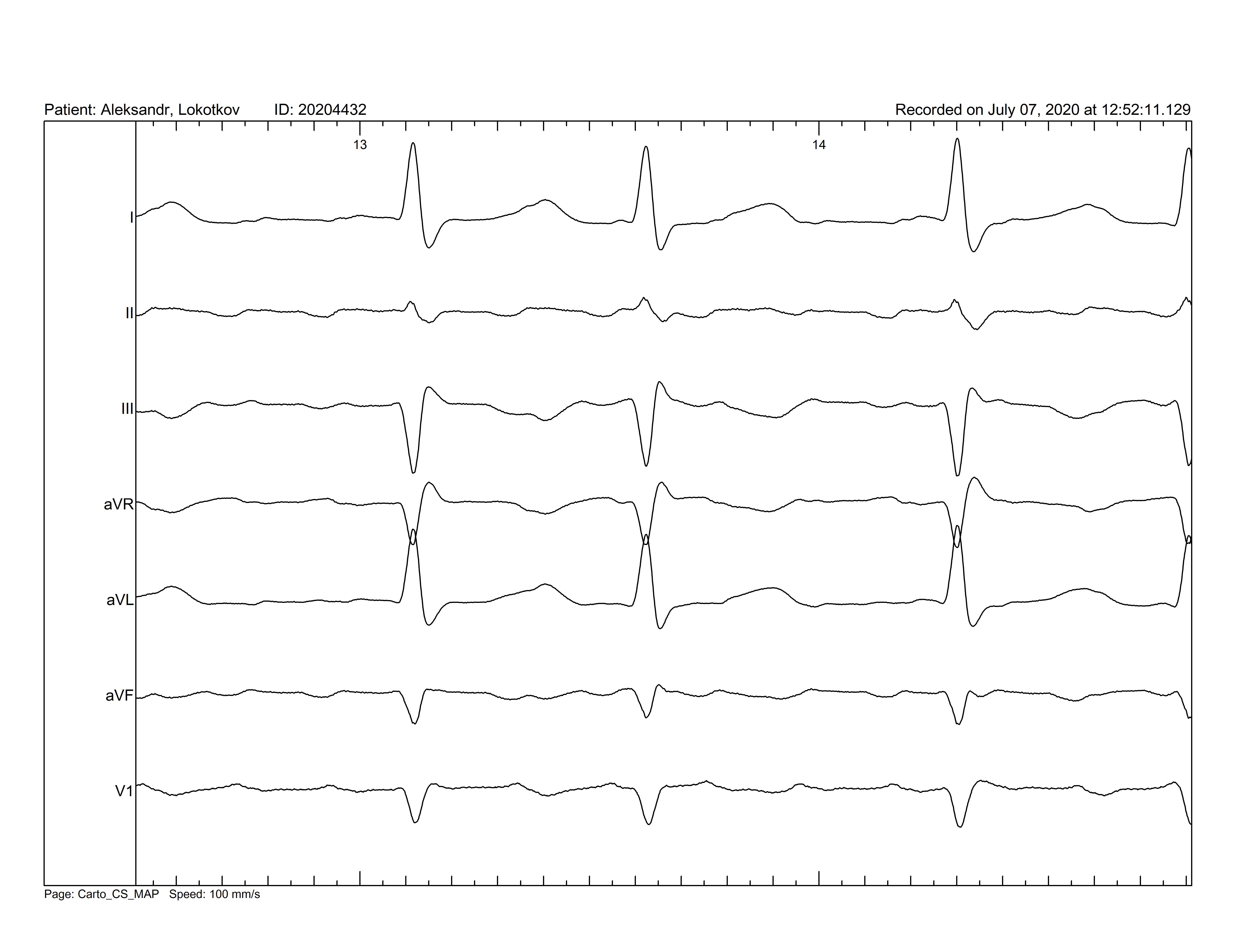 Figure. 1. On electrocardiogram an atrial flutter is registered. F waves negative in II, III and aVF leads and positive in V1 lead are seen. Isoelectric line between F waves is noted. 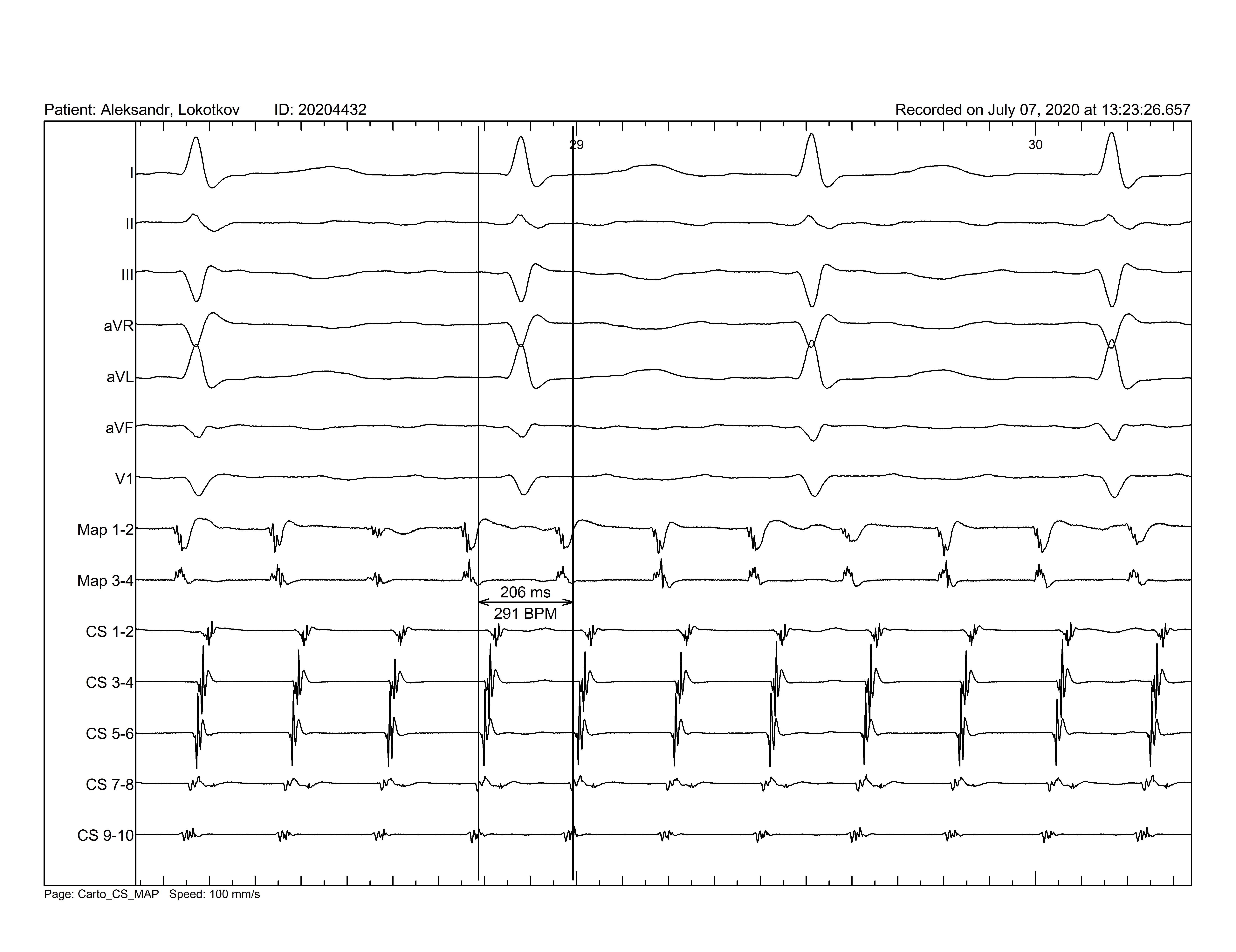 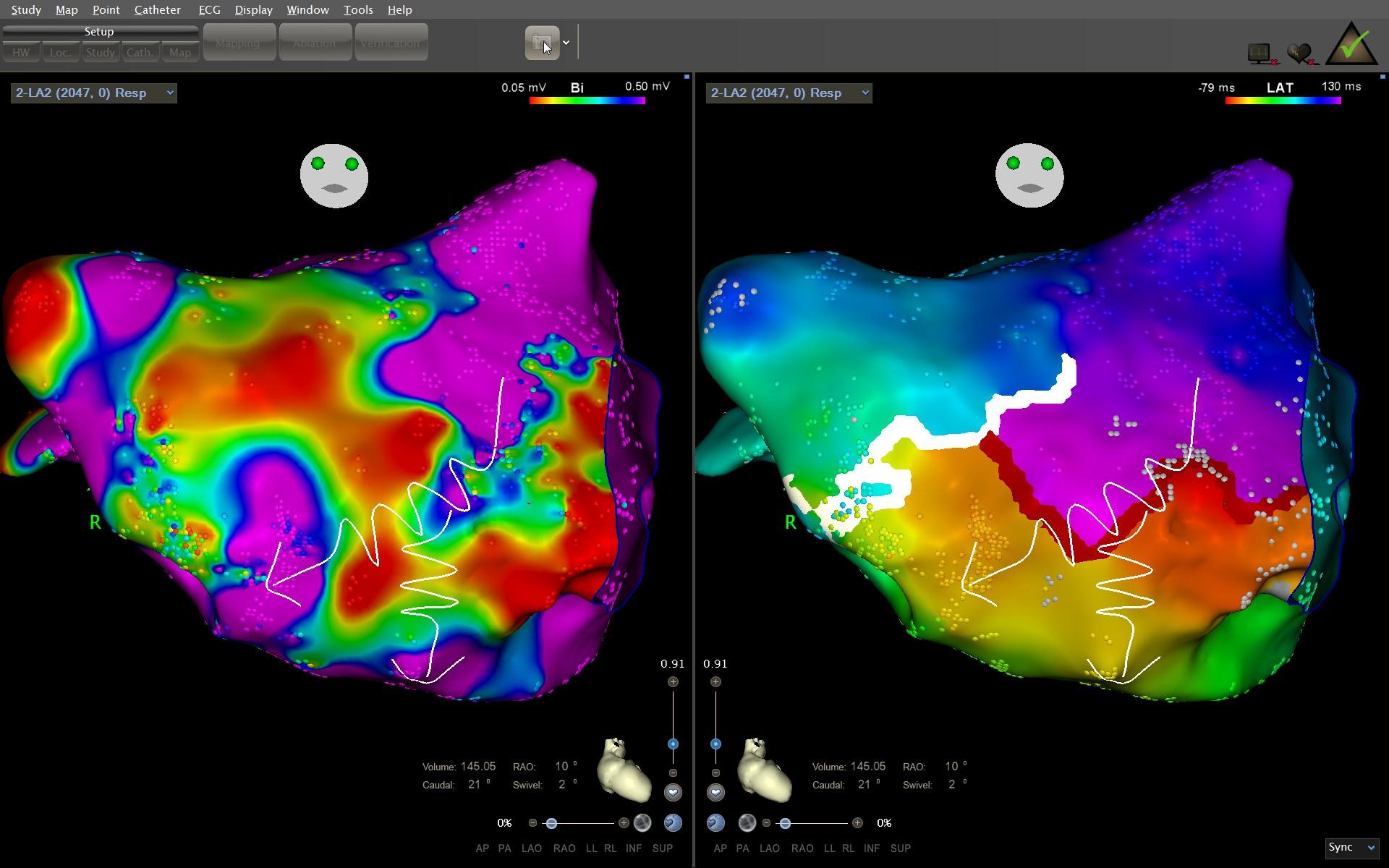 Figure 3. Bipolar map of the left atrium. In the antero-septal area two scar areas are seen. Curved lines depict the propagation of the wave front of the dual-loop atrial flutter: an antero-posterior view 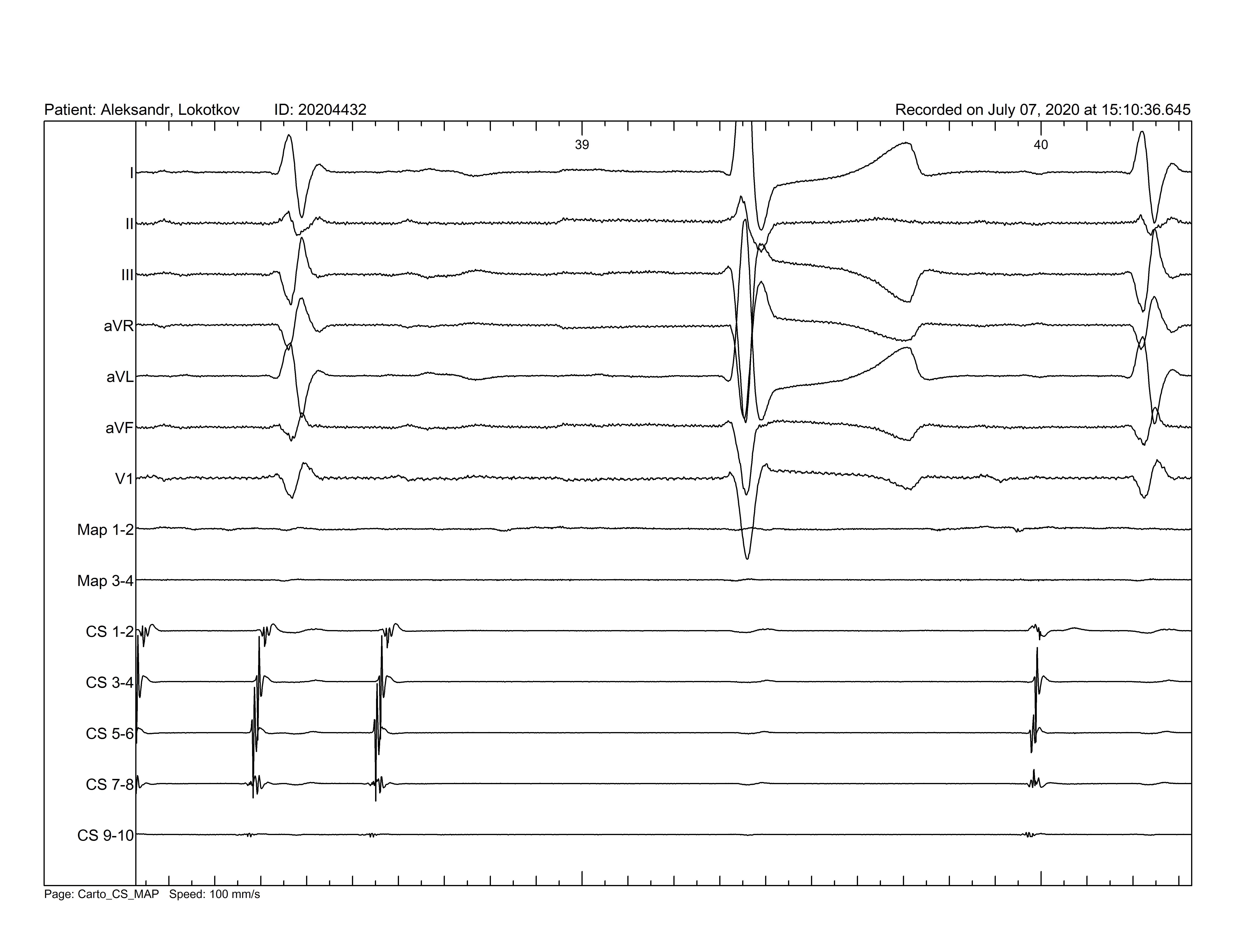 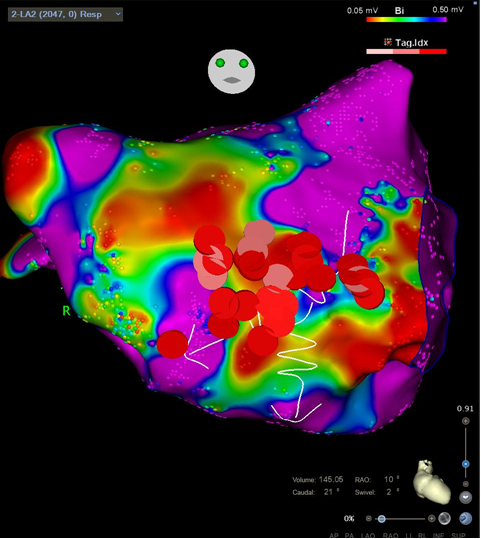 Figure 6. Bipolar map of the left atrium. Pink and red dots points depict radiofrequency ablations in the critical isthmus of the atrial flutter.

We performed a linear radiofrequency ablation connecting the two scar areas with increasing in cycle length of the tachycardia and subsequent termination upon the completion of the ablation line (Fig. 5 and 6). The atrial flutter could not be induced with various pacing maneuvers. The conduction block in the mitral isthmus circuit was confirmed by the pacing from the left atrial appendage using the ablation catheter and analyzing the activation sequence at the coronary sinus catheter (proximal-to-distal activation pattern). Then ablation catheter was withdrawn to the right atrium and CTI bidirectional conduction block was confirmed. The patient remains free of tachycardia for 2 years.

Scar-related atrial flutter is the most common complication after catheter ablation of atrial fibrillation or cardiac surgery. In the presented case, the patient had no previously performed cardiac surgery or catheter ablation in the left atrium. Spontaneously formed electrically silent areas in patients with atypical atrial flutters were first described by Jais et al (1). They showed that three out of 22 patients with atypical atrial flutter who had had no prior cardiac surgery had 2 electrically silent areas including the left atrial anterior wall. We defined two separate scar areas in the anteroseptal part of the left atrium. Fukamizu et al. suspected that the volume and pressure overload might play a role in the formation of scar areas in the left atrial enlargement (2). Ischemia, inflammation, atrial amyloidosis and tachycardia-related atrial remodeling have also been proposed as the potential causes of atrial scarring (3-5).

Age, gender, arterial hypertension, pulmonary hypertension, and left atrial enlargement may contribute to the left atrial scarring (6). Chronic arterial hypertension may result in a left ventricular diastolic function, increasing left ventricular pressure. The latter leads to increased left atrial pressure and volume. Zhu et al. showed that it was more often encountered in women with atrial fibrillation than in men. It was also shown that aging had been associated with areas of slow conduction and structural changes that include low-voltage areas (7). An increased sympathetic tone (8, 9), a pronounced decrease in estrogen level (10), an increase in an epicardial fat pad and metabolic syndrome (11), and an impaired diastolic function (12–14) in postmenopausal women may play a significant role in atrial fibrosis. All mentioned factors require further investigations to establish their relationship.

We did not find any scar areas in the left atrial posterior wall. It should be mentioned that our patient had dual-loop re-entry. Zhang et al. showed that three patients in his series had single-loop tachycardia with scarring in the left posterior atrial wall (15).

Another critical point in the presented case was that we used the COHERENT algorithm in CARTO 3 mapping system. Besides commonly used local activation time, which is often insufficient to describe complex scar-related atrial tachycardias, the addition of vector data helps to improve not only verification of the mechanism of the atrial tachycardia but also the critical isthmus for ablation in cases of reentry tachycardias. This algorithm allows accurate identification of the arrhythmia mechanism in more than 90% of cases as compared to 66.7% (p<0.001) with conventional mapping techniques (16).

In conclusion, perimitral atrial flutter using the silent scar area adjacent to the mitral annulus is the unusual cause of the flutter in a patient without previous ablations in the left atrium. Scar-related atrial flatter can be successfully cured using radiofrequency ablation.

Authorship: A.S, A.A, D.K and A.T.  equally contributed to the preparation of manuscript and management of patient