Objective: The aim of this article was to present the results of thoracotomy performed in three symptomatic adult patients with congenital diaphragm eventration in the light of current literature data.

Methods: Along with representation of the surgical management of each case, a brief review of literature was performed.

Results and Conclusion:  Diaphragmatic eventration is a rare clinical entity that may be congenital or acquired. Surgery, which may be open or endoscopic, is the primary treatment modality for symptomatic patients.

Eventration of the diaphragm is an abnormally high or elevated position of one leaf of the diaphragm as a result of paralysis, or atrophy of varying degree of the muscle fibers (1). Diaphragmatic eventration affects less than 0.05 % of the population including children and adults with male preponderance (2). It commonly affects the left hemidiaphragm and is usually unilateral (3) ; bilateral affliction is rare. It can be congenital or acquired; in the congenital variant, the phrenic nerve is normal. Eventrations are typically asymptomatic and are incidentally diagnosed (4). Rarely, it can cause progressive dyspnea and frequent respiratory infections and surgery is indicated in such patients (5, 6).

There is a bulging of the entire diaphragmatic leaflet in contrast to a hernia, which has a localized defect. The diaphragm is replaced with fibro-elastic tissue which causes displacement of the hemidiaphragm on the affected side(1). This leads to a compliant thin membrane formation which causes reduced movements leading to poor lung expansion and reduced blood flow with protrusion of abdominal contents to the thoracic cavity (Fig.1) (2, 5). 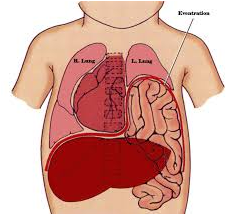 Here, we discuss three cases of congenital diaphragmatic eventration and the management strategies.

A 28-year-old male, a known case of biopsy proven nephrotic syndrome with no history of trauma, presented with chief complaints of swelling of face with worsening dyspnea for 3 months. Physical examination revealed reduced breath sounds in the left infra-mammary, infra-axillary, and infra-scapular areas with bowel sounds in the left infra-mammary region.

A 20-year-old male with no comorbidities and no history of trauma, that presented with cough and dyspnea, was incidentally diagnosed with a right diaphragmatic hernia after undergoing a chest radiograph.  No abnormalities were detected on physical examination other than reduced breath sound in the right infra-mammary, infra-axillary, and infra-scapular areas with bowel sounds in the right infra-mammary region.

All the patients were evaluated with a pre-operative chest radiograph which revealed substantially elevated hemidiaphragm on the affected side (Fig.2). A contrast enhanced computerized tomography of the thorax and abdomen revealed a displacement of the respective organs into the thoracic cavity with collapse of the lower lobe of the ipsilateral lung on the affected side (Fig. 3). Sniff test (fluoroscopic assessment of diaphragmatic function) showed paradoxical movement of elevated hemidiaphragm. In view of worsening dyspea, it was decided that all 3 patients require surgical management. 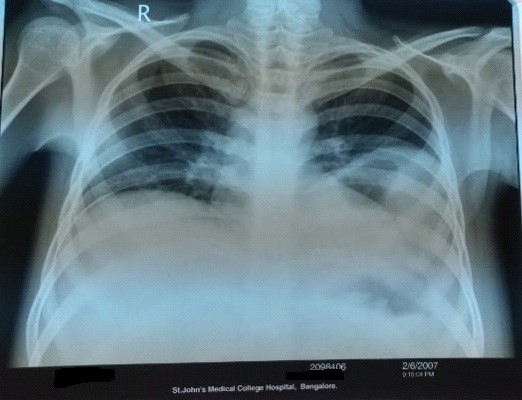 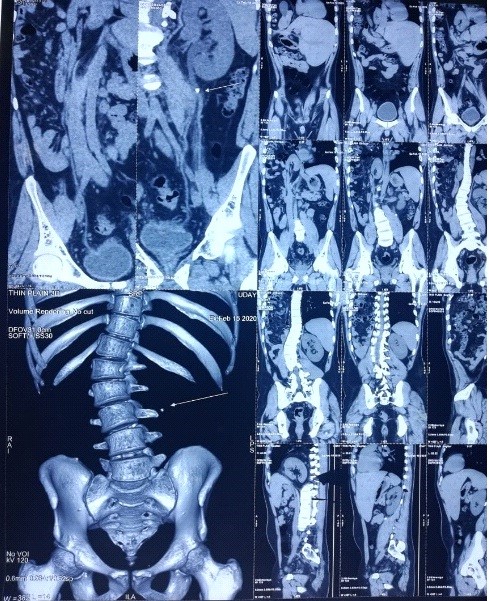 After adequate preoperative bowel preparation in all 3 patients, they underwent a muscle sparing anterolateral thoracotomy that was performed in the 5th intercostal space on the affected side. With this approach, the free edge of m. lattismus dorsi was mobilized posteriorly and the m. serratus anterior is freed at the level of its anterior insertion on the chest wall allowing earlier access to the anterior portion of the diaphragmatic leaflet. The diaphragm appeared morphologically normal but thinned out. The affected dome was opened anteriorly and towards the periphery following the line of insertion into the chest wall in order to avoid injury to the major branches of the phrenic nerve. The  contents were displaced inferiorly through the opened diaphragm into the abdominal cavity. The diaphragm was reconstructed  overlapping the two edges of the opened muscle with interrupted size 0 non absorbable U shaped sutures in a double breasted reconstruction technique, reinforced by a second running layer. Following which, the diaphragm was reinforced with a prolene mesh of 15x 15 cm in size with a non-absorbable interrupted suture.

We had to perform a midline laparotomy in case 2 as the right kidney was adherent and required mobilization of the Gerota’s fascia to reduce the contents and the mesh was placed on the undersurface of the diaphragm through the laparotomy incision using trochars.

In case 3, the mesh was anchored to the subcutaneous tissue with 1 -0 prolene as an innovative method. This was done to strengthen the diaphragm additionally from the intraabdominal forces.

All the patients underwent thoracotomy with diaphragmatic plication and mesh reinforcement. The patient’s postoperative course was uncomplicated and they were discharged on the 4th postoperative day and were seen in the outpatient clinic a week later and a chest X ray demonstrated a normal diaphragm contour of the previously affected side. There was a marked reduction of dyspnea which was appreciated among all the patients. After an initial follow-up of one month they are asymptomatic and are on further follow-up regime. These patients all underwent pulmonary function tests, which were found to be normal for their age. 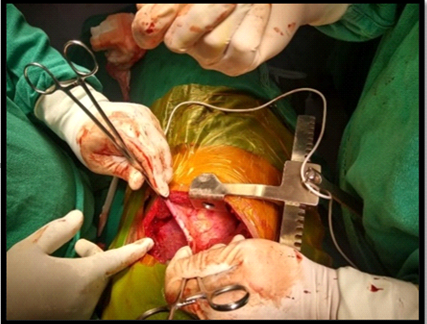 Figure 4. Intraoperative excision of diaphragm with defect closure of case 1 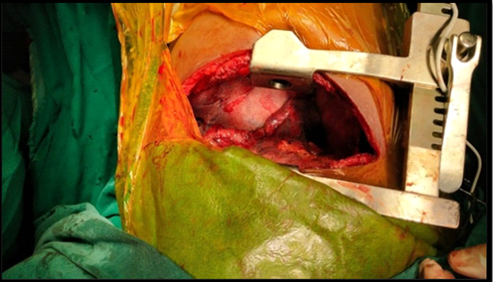 The diaphragm is a complex structure which developmental details are not completely known. It receives contribution from mediastinum, the transverse septum, the body wall musculature and pleuroperitoneal membranes (7). It is the failure of muscularization that leads to eventration affecting either the entire diaphragm or a portion of it. In 1774, Petit first described this condition and Cruveveilhier first used the term eventration. In 1947, Bisgard first performed the surgery.

It can be congenital or acquired. Congenital eventration following cytomegalovirus infection was reported by Wayne et all (8). Acquired eventration of the diaphragm is usually caused by injury to phrenic nerve or due to phrenic nerve paralysis by neoplasm and surgery that makes it difficult to differentiate in adults.  According to David and Illingworth eventration corresponds to 5% of all diaphragmatic defects (9).

Clinical course varies with extent of involvement, patient’s may be asymptomatic or mildly symptomatic. In some cases eventration has manifested with gastric volvulus, intestinal strangulation and recurrent sigmoid volvulus. Chest radiography, contrast enhanced computed tomography scan and fluoroscopy are useful methods of evaluation. Symptomatic patients are treated with surgery, as in our case series (10). The preferred surgery of choice is diaphragmatic plication with mesh reinforcement. This can be done through a midline laparotomy, thoracoscopic approach or even laparoscopically.

Thoracoscopic repair is different for diaphragmatic hernia and eventration. In case of diaphragmatic hernias, reduction of the contents is relatively simple, providing a larger space for mesh fixation. However, in eventration, there is not enough space for manipulation. This also determines the placement of the laparoscopic ports, which should be much higher, to allow for mobility in the chest (11).

The reinforcement of the mesh in the right plane is done to prevent herniation of the intraabdominal contents into the chest cavity. In one of our cases, we tried a novel method of additionally reinforcing the mesh to the subcutaneous plane, which probably provides additional strength to the diaphragm in the limited space we have within the chest cavity.

We recommend the thoracotomy approach for surgical procedure in cases of unilateral diaphragmatic eventration as an ideal approach, however laparotomy may be required in complicated cases. When laparotomy is done, the composite mesh reinforcement by placement on the under surface of the diaphragm is also an acceptable technique. Subcutaneous fixation of mesh is also a novel method.

Ethics: Written patients consent form was obtained from patients before all procedures