We describe a rare case of surgical management of multiple echinococcosis of left ventricle.

Echinococcosis is helminthiasis of cestodosis group characterized by formation of parasitic cysts in liver, lungs or other organs and tissues. Heart echinococcosis occurs in 0.5-2.0% of patients with generalized form of the disease. The embryos of echinococcus (scolexes) may penetrate into the heart in two ways - from the venous blood through the endocardium of the right heart and the breakout of hydatid cysts in the lung and pulmonary veins. In myocardium, scolex develops into mature hydatid cyst. Cyst maturation period lasts from one to five years, proceeding latently. Cysts might be both solitary and multiple varying in size. The end of mature cysts is rupture or calcification accompanied by the death of the parasite. Uncomplicated hydatid cysts are asymptomatic. The cyst may expand in the myocardium causing symptoms like chest pain, arrhythmia, congestive heart failure symptoms, and Morgagni - Adams - Stokes attacks.

Despite the fact that the major target organs for helminthes are liver and lungs, echinococcosis may affect any structure - from head to toe. Affections of lungs by  echinococcus are the second highest rate after liver (from 6 to 35% in relation to all localizations of parasite). Publications about heart echinococcosis, by the majority of researchers, both in our country and abroad, mainly, are symbolic due to lack of observations. In Turkey, having a leading position on the incidence of echinococcosis among 20,000 cardiac operations performed in 20 years, there were only 14 cases of hydatid localization in the heart (1).  Even in developed countries, safe in terms of sanitary and epidemiological measures, echinococcosis, nevertheless, may be a serious problem. In the United States, where every year about 100 new cases of echinococcosis are recorded. A similar situation occurs in Germany, Switzerland, Japan and other countries in Europe and Asia (2).

We present our experience of successful surgical removal of multiple hydatid cysts of the left ventricular posterior wall. 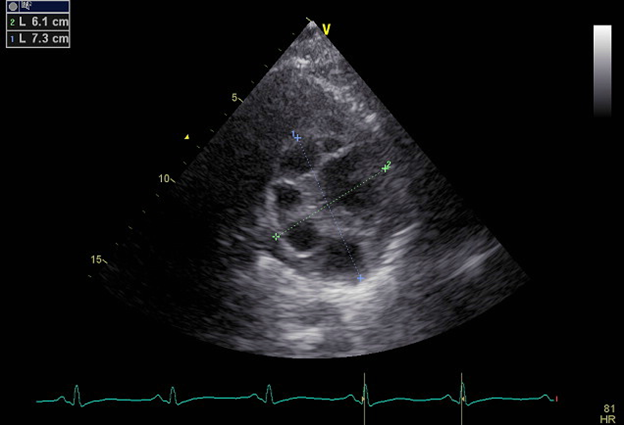 The patient, born in 1955, was admitted to our institution with complaints of chest discomfort corresponding to the pericardial area, arising at a change of body position and during physical activity, general weakness. According to anamnesis, the patient and his wife had had  hydatid cysts in the liver that were removed 15 years ago. Multiple cysts in the heart were found by chance during a hospitalization for pneumonia in 2015.

The general condition of a patient was assessed as moderate – NYHA-II-III class. Consciousness was clear, patient was active. The skin of normal color, no edema. Over the lungs no wheezing or rales were found on auscultation, respiratory rate was 15 breaths/min. Heart sounds were normal, rhythm regular, heart rate was 68 bpm, blood pressure was 110/70 mm Hg. The abdomen was not enlarged, soft, painless. The liver did not protrude from the edge of the costal arch. The diuresis and stool were regular.

Clinical and biochemical tests were within normal limits. Electrocardiogram: sinus rhythm, heart rate -  73 bpm, normal position of the cardiac electrical axis,  tall T-wave in V1,  negative T-waves in I and V6. On echocardiography, aorta findings were unremarkable with the diameter of ascending part of 30 mm. The aortic valve was intact, no regurgitation, mitral valve in counter phase, posterior leaflet movement was moderately limited (due to the cysts) and there was a 1.5 degree of regurgitation. Tricuspid valve displayed minimum regurgitation. The pulmonary artery was not extended, the valve of the pulmonary artery was unremarkable. Systolic pulmonary pressure was 27 mmHg. The dimensions of the cavities of the heart and pressure indicators: the left atrium – 37 mm,  the end-diastolic left ventricular size - 40 mm; end-systolic left ventricular size – 26 mm; left ventricular ejection fraction - 65%; the right atrium - not expanded, right ventricle – 21 mm. The wall thickness of the interventricular septum -11 mm, left ventricular posterior wall – 9 mm. The pericardium was normal. Zones of left ventricular hypokinesia were not found. Diastolic function of the left ventricle myocardium was abnormal with E/A ratio of 0.65. In the area of the posterior wall (intracardiac) the multi-chamber (5 masses of different size) cystic formation was observed (Fig. 1). 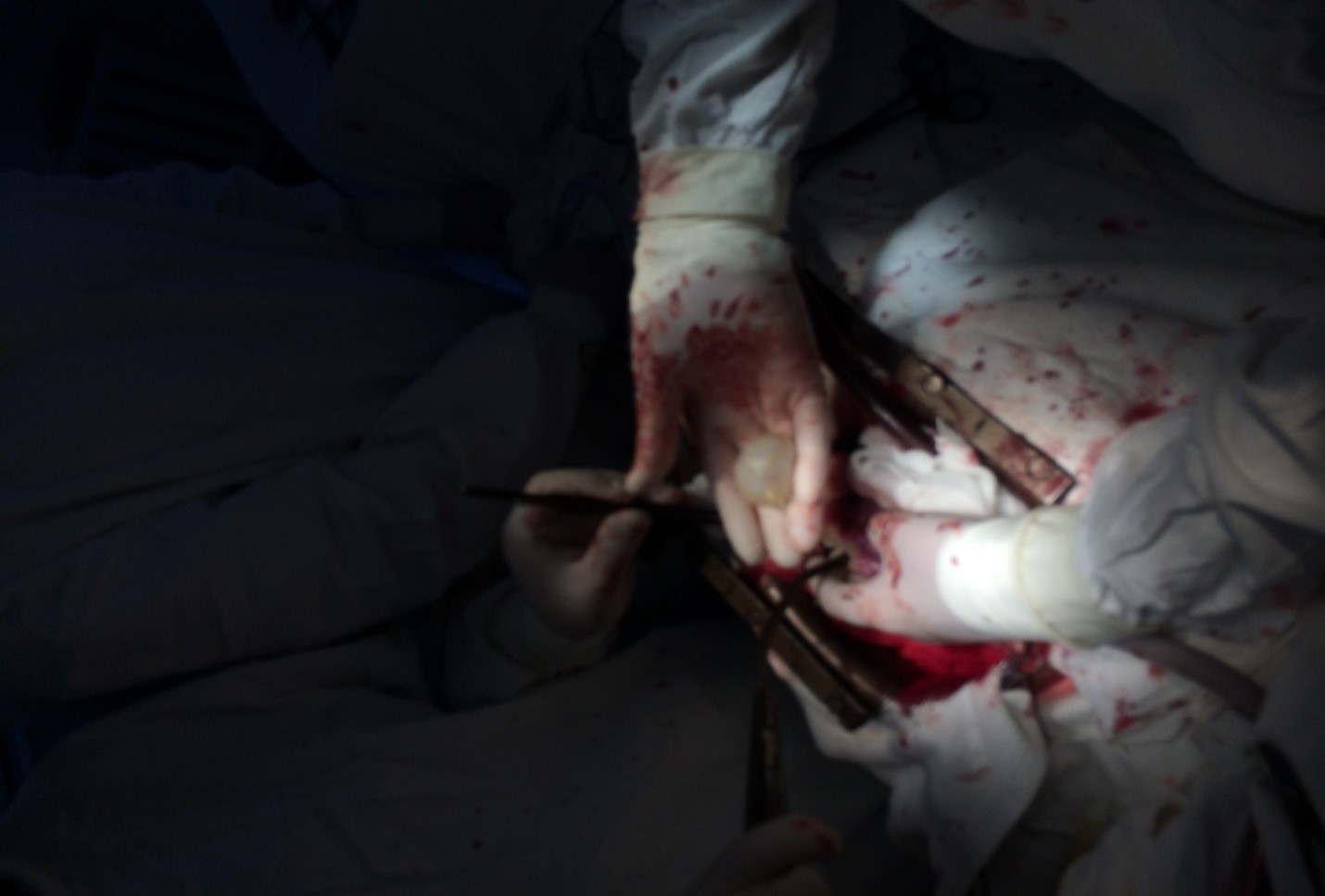 On chest X-ray: lung fields were transparent, lung roots of normal size, and pattern was not changed. Relaxation of right dome of the diaphragm was abnormal and the right sinus was sealed due to adhesions. Heart had deep waist, LV curve was elongated, and in the projection of the LV arch, a round mass was determined. Ultrasound of the internal organs revealed condition after the removal of cyst of the liver, chronic cholecystitis, chronic pyelonephritis. On multi-slice computed tomography the picture most likely corresponding  to the sign of the mass lesion of middle mediastinum at the lower level (probably a cyst of parasitic nature echinococcus) was observed.

The routinely planned surgery was performed on 1st of June 2016 - echinococcectomy of the left ventricular posterior wall with normothermic cardiopulmonary bypass on a beating heart. During surgery,  a large cyst in the posterior wall spreading to the left ventricular apex was revealed with pericardial-epicardial adhesions. After induction of artificial circulation, cyst occupying the entire LV posterior wall and the apex of the left ventricle was noted.  Heart was reverted (Fig. 2). At palpation, the cyst wall was thinned and tense. The area of intervention was limited by pads around the cyst and connected to an external vacuum suction, to prevent dissemination of parasite to surrounding tissues. Then, cyst was decompressed with puncture and 20.0 ml of serous fluid was removed and sent to a laboratory for examination. In the previous puncture site, a linear incision (2.0 cm) in the direction of the top was conducted and the tip of vacuum aspirator was installed in the cavity of the cyst.  The liquid contents of the cyst and fragments of chitin shell were removed. After the stop of delivery, detachable tip was removed and cruciate incision was made with scissors and extension of the former incision in the longitudinal direction, taking into account the location of the cyst in the direction of the least traumatic cardiac structures, was performed. Multiple cysts sized up to a hen’s egg to peas (about 20 pieces) (Fig .3) were removed. Then the remains of chitin shell were removed in fragments. Fibrous capsule was filled with 2% formalin solution for 7-10 minutes, then with 70% alcohol solution additionally. Residual cavity was sutured tightly. The pads were removed from the wound. The pericardium was washed with a warm 0.9% solution of sodium chloride + ceftriaxone and artificial circulation was stopped.

Electrocardiogram showed sinus rhythm with heart rate of 76 bpm and normal position of the cardiac electrical axis. Echocardiography demonstrated the end-diastolic dimension of the left ventricle of 5.6 cm, end-systolic dimension of the left ventricle - 3.8 cm, left ventricular ejection fraction - 60% and  1st degree mitral regurgitation. Mean pulmonary pressure was 18 mm Hg. The 3 small residual cavities and wall thickness of 2.4 mm were determined in left ventricular posterior wall. The pericardium and pleural cavities were  unremarkable. On the chest X-ray inspection of the chest, the positive dynamic was noted: in direct and right lateral views the signs of infiltration were absent, aorta was sealed. Postoperative wound healed without complications and patient was discharged.

Our case is remarkable by the rare localization of multiple cysts in left ventricular posterior wall. We performed the full imaging and laboratory evaluation before surgery and described here our successful management of cysts removal from left posterior wall during operation on beating heart. It should be emphasized, that patient and his family had already history of hydatid cyst removal from lungs and at present time, the cardiac hydatidosis was discovered during treatment for pneumonia. That means, there were no specific clinical signs or complaints pertinent to echinococcosis.

Rare localizations of multiple cardiac hydatid cysts – left ventricular posterior wall, especially in a patient with history of other organ hydatidosis and past surgery, might not manifest by symptoms specific to echinococcal heart involvement. Therefore, these patients should be carefully evaluated for presence of cardiac cysts. The full diagnostic workup is required to define precise localization of cysts and the technique we described was successful in removal of hydatid cysts of left ventricular wall without complications.