Objective: Severe mitral valve insufficiency may lead to heart failure and associated hemodynamic repercussions, such as congestion and weaning-induced pulmonary oedema. This slows weaning from mechanical ventilation, increases the length of the hospital stay, and worsens the patient’s prognosis. Case report: The present report describes one strategy used for cardiopulmonary rehabilitation and to help wean a patient from mechanical ventilation, with prohibitive comorbidities that contra-indicate surgical mitral valve repair, using respiratory and peripheral muscle training associated with positive pressure ventilation. Discussion: The severe dysfunction of the mitral valve was considered to be surgically inoperable by the surgeon team. However, the weaning and rehabilitation challenges in this patient with severe chronic obstructive pulmonary disease, even with weaning-induced pulmonary edema occurrence, were overcome. The strategy to rehabilitate respiratory muscle force during positive pressure ventilation, concomitantly to a cardiopulmonary rehabilitation program, improved peripheral muscle strength and functionality, reducing energetic demand, allowing the weaning from mechanical ventilation. Conclusion: Despite the severity of the disease, with the adopted strategy it was possible to perform weaning of the mechanical ventilation, allowing the patient to survive with his relatives.

When patients’ experienced mitral insufficiency after an acute chordae tendineae rupture associated with positive pressure mechanical ventilation dependency, but have clinical impairments to undergo surgery, or have financial limitations for undergoing percutaneous treatment (2), it is unclear if rehabilitation is possible to achieve a dignified end-of-life.

The first step of this challenge is the weaning from mechanical ventilation. The discontinuation of positive pressure ventilation can exacerbate heart failure symptoms (3), leading to pulmonary congestion and dyspnoea, known as weaning-induced pulmonary oedema (WIPE) that is associated with intensive care acquired weakness, which results in low exercise tolerance. This makes rehabilitation and ventilator weaning difficult (4).

Herein, we describe a strategy that was used to wean from mechanical ventilation and rehabilitate a heart failure patient who experienced acute rupture of the chordae tendineae of the anterior mitral valve leaflet without surgical or transcutaneous correction.

A 64-year-old man with severe chronic obstructive pulmonary disease (COPD) and history of acute myocardial infarction treated with percutaneous transthoracic coronary angioplasty four years prior presented to the emergency care unit. He also previously underwent stent placement in the right and circumflex coronary arteries, and had three episodes of cerebrovascular accidents without motor sequelae. He experienced 21 kg of body weight loss (from 64 to 43 kg) in the past 3 months, and had a body mass index of 14.9 kg/m2; he was referred for progressive dyspnea that culminated in acute pulmonary edema evolving to cardiopulmonary arrest. After cardiopulmonary resuscitation and clinical stabilization, the patient was transferred to a tertiary hospital where a chordae tendineae rupture of the anterior leaflet of the mitral valve with severe mitral regurgitation was diagnosed by Doppler echocardiography. Doppler echocardiography also demonstrated enlargement of the left chambers, aortic valve thickening with moderate regurgitation, borderline right and left ventricular contractile function, and elevated pulmonary arterial systolic pressure (PASP: 60 mmHg). Four weeks later, he was transferred to a quaternary hospital intensive care unit (ICU) for surgical correction of the mitral lesion.

Upon presentation, he was under deep sedation (RASS -4) and assist-control invasive mechanical ventilation, via an orotracheal tube. At that time, the arterial blood gases were typically from a carbon dioxide retainer (pH: 7.52; pO2¬: 133.0 mmHg; pCO2: 40.6 mmHg; HCO3-: 33.2 mEq/L; base excess: 9.5 mEq/L; lactate: 0.9 mmol/mL) and the hemogram demonstrated anaemia (haemoglobin: 6.7 g/dL; haematocrit: 21.6%) with a normal leukocyte count (6600 cells/mm3) and C- reactive protein levels (8.9 mg/L). In the subsequent two days, together with early mobilization, sedation was discontinued and the patient was alert and oriented; additionally, the mechanical ventilation mode was changed to spontaneous pressure support ventilation (PSV- pressure support ventilation: 10 cmH2O; PEEP: 6 cmH2O; FiO2: 30%), allowing orotracheal extubation. Despite the good clinical evolution, the team of physicians and surgeons opted for conservative treatment, contraindicating mitral valve replacement surgery or percutaneous mitral valve repair because of the elevated mortality risk associated to the clinical status of the patient and prohibitive cost, respectively.

Extubation was unsuccessful in the patient on two occasions, associated to pulmonary congestion even with non-invasive pressure ventilation (BiPAP- bilevel positive airway pressure; IP: 12 cmH20; PEEP: 8 cmH20) periods longer than 24 hours. After the second failure of extubation, four weeks after admission in the quaternary hospital, the clinician team decided to use a tracheostomy to wean the patient from positive pressure ventilation that began 24 hours after the procedure.

The weaning from the mechanical ventilation was conducted according to the protocol of the institution, beginning with 30 minutes of spontaneous breathing under T peace, followed by 120 minutes in PSV, with the period of spontaneous breathing, which increased twice daily until reaching 24 consecutive hours without PSV. However, during the following week, the condition of the patient did not improve even when using the T piece (periods shorter than 1 hour). Therefore, the clinician team decided to interrupt T piece weaning for a week to implement a strategy that revealed an association between an intense cardiopulmonary rehabilitation effort under positive pressure mechanical ventilation with a positive pressure respiratory muscle strength protocol (consisting of periods of PSV 6 cmH2O; once the patient achieved > 30 bpm, the PSV was increased to values in which the respiratory rate returned to values below 30 bpm). The Table 1 summarizes the protocol for the prescription of aerobic and anaerobic exercises that increased peripheral muscle strength, including ambulation, which was conducted during positive pressure ventilation using the modified Borg scale for intensity (Borg 2 to 3) monitoring (Figure 1A and B). 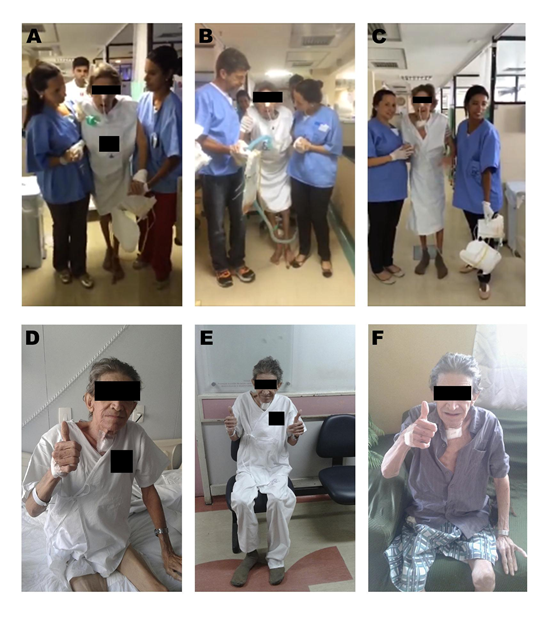 The weaning phase using the T piece was initiated again after one week, and concluded after two weeks, with consequent tracheostomy decannulation (Figure 1C) and discharge from ICU (Figure 1D and E). After two weeks in the hospital ward, similar episodes of intense headaches (cranial computed tomography excluded haemorrhage), precordialgia, and dyspnoea due to bronchospasm and congestion lead the patient to be admitted three times to the ICU. In the first two times, conservative treatment with bronchodilators, diuretics, and non-invasive ventilation were sufficient to achieve clinical stabilization. During the third, these measures were not enough, culminating the necessity for invasive mechanical ventilation with another tracheostomization for 16 weeks after hospital admission. The weaning from the mechanical ventilation was as difficult as the first ICU admission, leading to the adoption of the same strategy of cardiopulmonary rehabilitation associated with positive pressure muscle training, as previously described. After four weeks, the weaning was completed, and the patient was, again, discharged from the ICU. Ten days later, the patient was decannulated and discharged from hospital (Figure 1F).

Mitral valve surgery (repair or replacement) is the most commonly indicated procedure for severe mitral insufficiency treatment associated with symptoms of ventricular dysfunction. A successful repair leads to direct symptoms and life-expectancy improvement for those patients. However, in patients with symptomatic mitral insufficiency and severe comorbidities, the elevated morbidity and mortality risk prohibits the surgery, leaving those patients with percutaneous mitral valve repair that requires clinical conservative treatment (5).

The presented report aimed to discuss strategies and challenges of weaning patients from mechanical ventilation and the rehabilitation of patients with severe COPD, where the inoperable mitral valve insufficiency, with all hemodynamic implications, and clinical conservative treatments have already been determined.

The transition for spontaneous ventilation without positive pressure in heart disease patients may lead to weaning-induced pulmonary oedema, with exacerbation of pulmonary congestion already present in those patients (7), increasing the length of the hospital stay and worsening the prognosis (8). Therefore, it is fundamental to examine these strategies to minimize the effects of WIPE.

In our patient, severe dysfunction of the anterior mitral valve leaflet, considered to be surgically inoperable by the physician team, was associated with comorbidities that would allow him to receive a palliative care program. However, the weaning and rehabilitation challenges in this patient with severe COPD, even with WIPE occurrence, were overcome.

The strategy used was to rehabilitate respiratory muscle force during positive pressure ventilation, to minimize excessive increases in work of breath that generally occurs during spontaneous ventilation without positive pressure. This could further reduce intrathoracic pressure, leading to worsened left ventricular dysfunction and WIPE. Concomitantly, a cardiopulmonary rehabilitation program was conducted, allowing for improvement of peripheral muscle strength and functionality to reduce energetic demand (9).

It is well described that peripheral muscle training contributes to dyspnoea perception and an improvement of exercise tolerance in both COPD (9) and heart failure patients (10), which could be an adjuvant for patients who experience weaning difficulties. However, despite the current bedside practice, there is no description in the literature regarding the use of PSV with low pressure for respiratory muscle training and an associated peripheral exercise program during positive pressure ventilation.

The present study reported ventilation weaning and a cardiopulmonary rehabilitation strategy that permitted the discontinuation of mechanical ventilation in a patient who, owing to the presence of severe mitral insufficiency, would not tolerate spontaneous physiological ventilation, who was, therefore, discharged for a more dignified end-of-life program.

Consent: the present case report was approved by ethics committee of National Institute of Cardiology (CAEE nº 74748117200005272; registration number: 2259629). The informed consent authorizing the publication and the use any data/media that identifies patients was obtained and is with the corresponding author.

Conflict of Interest: the authors declare that there is no conflict of interest.

Acknowledgements: we thank the Graduate Program in Cardiovascular Sciences of the National Institute of Cardiology for the assistance.

Funding: This research did not receive any specific grant from funding agencies in the public, commercial, or not-for-profit sectors.