Scientific Research Institute of Heart Surgery and Transplantation of Organs of the Ministry of Health of the Kyrgyz Republic, Bishkek, Kyrgyzstan 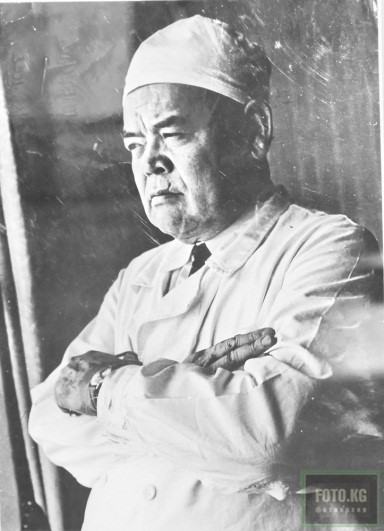 “With my work, I am the son of my nation. Before these people I bow. People, I'm your slave. Not only with work, but with my blood I belong to you. I am Isa.”

It is dedicated to the 110th anniversary of Academician Isa Akhunbaev

The September 25th of this year marks the 110th anniversary of the birth of a prominent scientist, the first president of the Academy of Sciences of the Kyrgyz SSR, teacher for many generations of the creative elite of Kyrgyzstan, the founder of national thoracic and cardiac surgery; the Academician Isa Konoevich Akhunbaev. The emergence of him as a person who, first and foremost thought about the job, had to endure hard years; forced immigration to China in 1916, the large-scale repressions of the 1930s, and the pressure from the authorities in the 50s and 60s of the 20th century, he endured on his own. He endured all these adversities for the benefit of the ideas and for the good of people.

Despite the fact that the activities of Isa Konoevich were acknowledged with due time by merit; the Kyrgyz State Medical Academy was named after him, as well as the largest multidisciplinary medical center of the country - the National Hospital, and the street where the Kyrgyz State Medical Academy stands. His ideas in the next generations will be rethought, and we hope they will positively influence not only the bettering of medicine, but also the progressive development of the country as a whole. The scale of his mentality is difficult to assess by merit, because his whole life, if abstracted, was devoted to the formation and development of a particular industry, and progress as a whole. In order to understand that, we must remember the difficult times he was born in and in what times he created. Suffice to say that, these were the 60s of the last century, it was a time of global changes and achievements throughout the world, it is worth remembering the first manned flight into space that Yuri Gagarin carried out, etc. All his life and work, they are written in his words: "I am your servant. Not only with work, but with my blood I belong to you.”

The continuity of his mentality at the present time is necessary, because now it is a time of great technological achievements. The transplantation of the heart about which it was said that it is akin to flying into space, is now an ordinary thing that his scholars and his school are putting into practice (Djoshibaev S.D., Pya Y.V.) His ideas are embodied now not only in Kyrgyzstan, but also in the neighboring Kazakhstan where his students work, as well as the pupils of his students. In the Kyrgyz Republic, his ideas are embodied in the Scientific Research Institute of Cardiac Surgery and Organ Transplantation, where the whole volume of operations for correction of congenital, acquired heart defects, coronary, vascular surgery, arrhythmology, including interventional methods of treatment, are carried out at the present day. Diagnosis of heart diseases is currently carried out not only from the first minutes of birth, but also in utero. One of his main ideas - the availability of medical qualified assistance to the population, is available starting from the first days of life.

As with Akhunbaev, modern cardiac surgery experienced difficult times when people with limited interest in life who pursued only selfish goals, without common sense, attempted to crush and break down the cardiac surgery of the republic. However, each period of history brings a new generation of people who think and remember the ideas of Isa Konoevich, who know how to help and invest their organizational, scientific, practical potentials in the development of medicine; they belong to the School of Academician I.K. Akhunbaev. There are several generations of carriers of ideas of Akhunbaev, his first students; Professor Baizakov U.B., Romanov A.S., Finger M.G., Mukhamedziev N.M., Androsov A., Kokkozov O.A., the second generation; Maralov A.N., Djoshibaev S.D., Sherova A.A.,  Akhunbaeva N.I., the third generation; Pya Y.V., Mamatov E.A., Zhooshev K.T., Alimbaev S.A., Urmanbetov K.S. and the current generation; Aripov M.A., Kudaiberdiev T.Z., Ashimov Zh.I., Muraliev E. Zh. and others (1). We belong to the fourth generation of the bearers of his ideas, I hope the next generations will be able to correctly convey the mentality of Isa Konoevich for the good of the country and the people.

No wonder his name - Isa - in Arabic means "giving life ..." and he gave life and hope to thousands of people. And people paid him boundless love and respect. His authority among the people was very high. And at the same time, Isa Konoevich always remained a modest, charming, kind and accessible person. We admit that we were not able to fully convey the complexity and uncommon nature of his being. This is quite understandable. Not without reason, sculptors and artists noted that it is difficult for them to convey in the pictures and stone, the complex simplicity of the personality of this great man (2).

Authorship: T.Z.K. and U.B.B. equally contributed to preparation of editorial