Objective: To evaluate the presence of sinus rhythm or atrial fibrillation (AF) in patients who had mitral valve surgery with concomitant surgical ablation of AF, by unipolar or bipolar radiofrequency.

Methods: Adults patients who had mitral valve replacement or mitral valvuloplasty with concomitant surgical ablation of AF, either by unipolar or bipolar radiofrequency, were consecutively included between the 2008 and 2012. Surgery was done by conventional median sternotomy.

Conclusion: The use of bipolar energy is superior to unipolar energy in the surgical ablation of atrial fibrillation in patients submitted to mitral valve surgery.

Mitral valve disease especially that of rheumatic etiology, is prevalent in patients from low and middle-income countries. Rheumatic mitral valve (MV) disease accounts for nearly 60% of indications for valve replacement therapy in Brazil (1, 2). On the other hand, atrial fibrillation (AF) is the most common cardiac arrhythmia in patients who undergo cardiac surgery. AF is a marker of a more advanced cardiac disease as well as a risk factor for operative complications and mortality (3). Its incidence in patients submitted to cardiac surgery is around 10% but it may reach 40% in patients with MV disease (4). Surgical treatment of AF concomitant with surgery to the mitral valve is considered safe and effective nowadays (5, 6).

In the year 2007 a protocol for ablation of AF in patients who had cardiac surgery was initiated at our institution. Since then, several strategies have been utilized to achieve this goal: the “cut and sew” method, and the unipolar or bipolar radiofrequency. We recently published partial results (7) regarding immediate and 1 year follow-up of patients who had bipolar surgical ablation, showing that sinus rhythm was achieved for over 70% of patients.

In the present study, our first objective was to evaluate over 3 to 4 years the presence of sinus rhythm or atrial fibrillation in patients who had mitral valve surgery with concomitant surgical ablation of AF, by unipolar or bipolar radiofrequency. Secondly, we compared the subgroups submitted to unipolar or bipolar ablation regarding the efficacy of the procedure. And lastly, we aimed to study risk factors associated with success or failure of surgical ablation of AF.

This was an observational retrospective study.

The patients were operated at a cardiological tertiary center, National Institute of Cardiology, Rio de Janeiro, Brazil, between the years of 2008 and 2012. Patients were selected by a heart team involving clinical cardiologists and heart surgeons. The medical records were evaluated after surgery in the year of 2012 and data collection was performed by the authors.

Surgery was done by conventional median sternotomy, cannulation of the aorta and the venae cavae, cardiopulmonary by-pass and moderate hypothermia. A cold blood cardioplegic solution infused retrogradely or anterogradely, at the surgeon´s discretion, was used for myocardial protection; it was infused intermittently, every 15 to 20 minutes. Access to the MV was obtained preferentially via the LA, except when operating the tricuspid valve, where the trans-septal access was preferred.

The choice of the number of lesions for the ablation as well as the handling of the left atrial appendage were done at the discretion of each surgeon. All surgeons isolated the pulmonary veins, included the lines of atrial communication when the LA was opened and included ablation lines in the right atrium when it was opened for tricuspid valve surgery. All patients had their left atrial appendage occluded by endocardial suture. The specific lesions made with the bipolar radiofrequency device (Atricure Inc., Cincinnati - OH) have been previously described (7, 9). In summary, left and right pulmonary veins were clamped by the jaws of the bipolar device and clamped to release the bipolar energy. The device warns the surgeon, through a sound signal when transmurality of the lesion was achieved. The same procedure is performed by clamping the posterior left atrium wall to communicate left and right pulmonary veins lesions. When the unipolar device (Cardioblate/Cardioblate BP Surgical Ablation System; Medtronic Inc, MN, USA) was used, this was done when the left and/or right atrium were opened and the energy was applied to the endocardial surface of the atria.

The availability of each type of device varied over the four years of study in our institution due to financial reasons. This explains the different use of each device over time. There was no testing of electrical conduction performed after tissue ablation and no EP recording after the operation.

The patients were followed up in the outpatient department by a specialist, non-blinded regarding type of rhythm, thromboembolic events, percutaneous ablation procedures and cardiac reoperations. A 24-hour, 3-channel Holter monitoring was requested after 6 months, and then yearly as deemed necessary. Therapeutic failure was defined as the presence of tachyarrhythmia (AF or atrial flutter) lasting more than 30 seconds in a 24 hour period 3 or more months after surgery.

We described our data using descriptive statistics techniques as mean, standard deviation, median, interquartile range. We performed statistical tests in order to check differences between unipolar and bipolar energy. For qualitative variables, we calculated Chi-Square test and Fisher's exact test and for quantitative variables, we calculated t-test and Mann-Whitney. Also we performed a survival analysis to check the survival rate and the mean follow-up time. We used the software R 3.2.1 for analyze our data.

Electrocardiogram and Holter monitoring showed different patterns of therapeutic failures over the years in patients who had unipolar or bipolar ablation of AF (Fig. 1). After 4 years no patient who had had unipolar ablation was in sinus rhythm, whilst 67% of those who had bipolar energy ablation were in sinus rhythm (p<0.001). Regarding preoperative variables, the presence of long-standing persistent AF vs paroxysmal AF and the duration of AF before surgery were associated to therapeutic failure. 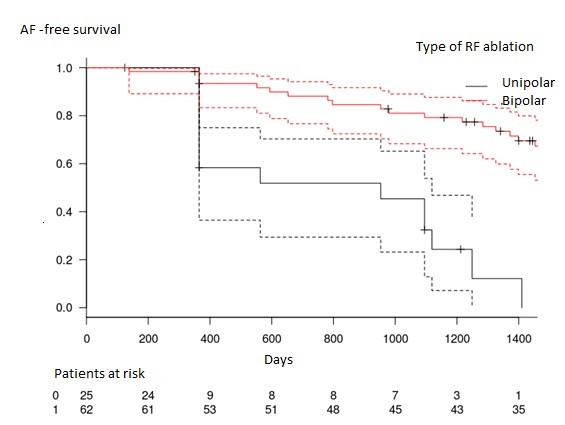 Figure  1. Comparison between bipolar and unipolar energy in 99 patients with surgical ablation of atrial fibrillation as to frequency of sinus rhythm over time

After surgery, no patient was submitted to catheter ablation. In our institution, this technology is not easily available.

Several differences regarding the baseline characteristics of patients in the unipolar ablation vs the bipolar ablation groups were seen (Table 3). The Unipolar subgroup of patients had more permanent AF (16 vs 3%, p=0.047), systemic hypertension (66 vs 41%, p=0.05), mitral regurgitation as the predominant lesion (90 vs 65%, p=0.048) and tricuspid regurgitation (85 vs 47%, p=0.015). Therefore, this subgroup had more advanced valvular heart disease than the group who had bipolar energy ablation of AF.

Although there was an 8% mortality in the per-operative period, no patients died in the ambulatory follow up. Therefore, total survival was 92%.

Since the 1990s the surgical treatment of AF has been recommended as a concomitant procedure in valvular surgery (10, 11) or even during other types of cardiac surgery, such as coronary artery by-pass grafting (12) or aortic surgery. The method’s efficacy is related to the interruption of electrical impulses originating from the pulmonary veins as well as to the inhibition of electrical impulses from macro-reentrant circuits within the atrial myocardium (13). The first method utilized in surgical ablation of AF was the “cut and sew” (10).

However, alternative methods using different forms of energy (radiofrequency ablation and cryoablation, microwave) have proved more effective and practical with the use of the Cox-Maze IV procedure. This disruptive technology allowed a broader indication for the use of surgical ablation in cardiac surgery (14). In our institution we have both unipolar and bipolar devices available for this purpose.

It is possible to promote several atrial lesions with the unipolar and bipolar devices. However, the transmurality of the created lesions cannot be immediately evaluated as the surgeon does not have a real-time feedback so as to terminate the procedure safely.

The success of surgical ablation needs to be evaluated not only in the light of the cardiac rhythm achieved over time (6), but also by a better quality of life and improvement in symptomatology (3). Maintenance of sinus rhythm over the years is reported as varying between 50 to 80% (4,15,16). The reasons for these discrepancies are probably multifactorial: different baseline characteristics of the patients (17), choosing different set of ablative lesions (18), type of energy employed and the tests used to evaluate cardiac rhythm (15). Interestingly, we found an important difference in the frequency of sinus rhythm at 4 years between patients who had surgical ablation with bipolar energy (67%) compared to those who had unipolar (0%). A recent review by Chen et al (19) showed that ablation of AF by unipolar energy was effective when compared to no ablation, reaching sinus rhythm in 54 to 83% of patients in the medium term. On the other hand, Pinho et al (20) reported dismaying results in patients with degenerative or rheumatic MV disease submitted to surgical ablation with unipolar energy, in which 45% were in sinus rhythm at 3 months and only 40% at 38 months. Martin Suarez (21) did not find a significant difference in the success rate of achieving sinus rhythm when comparing bipolar (71%) and unipolar (64%) energy on the endocardium, although when patients who had unipolar energy applied to the epicardium had inferior results (46%). Geidel et al (22), treating patients with permanent AF, also did not find differences relating to bipolar or unipolar ablation. Our series has a longer follow up time than those in the series just mentioned. Therefore, although in the short term (1 year FU) Unipolar ablation has an incidence of sinus rhythm above 60%, which is in agreement with other publications, this efficacy does not hold along the years. It must be emphasized that our subgroup of patients who had Unipolar ablation had preoperative characteristics of more advanced MV disease compared to the bipolar group (Table 3). However, these differences probably do not account, on their own, on the large divergence in rhythm results after 4 years of follow up. One possible explanation may be the different technology applied in the unipolar and bipolar devices. The bipolar device has advantages over the unipolar one (23), with increased security on the dispersion of energy, at the same time creating continuous lesions with the ability to assess whether the lesion has reached the entire thickness of the atrial wall through the sound feedback system of the forceps console. By a sound signal, the surgeon had real time feedback and is able to interrupt the energy application safely.

Limitations of the Study

The current study suffers from the limitations of a retrospective analysis of the subjects, including selection bias when choosing between the two options of energy ablation. Since the surgeon had the liberty of choosing which energy source to use in each case, selection bias of treatment cannot be excluded.

This study suggest that bipolar energy can be superior to unipolar energy in the surgical ablation of atrial fibrillation in patients submitted to mitral valve surgery. Randomized studies in the future may be helpful in determining the role of these two technologies in the ablation of AF.

Conflict of interest Statement: None to declare.

Leonardo Canale: Made contribution to analysis and interpretation of data, revising it critically for important intellectual content and submitting it. Gave final approval of the version to be published.

Marcelo Correia: Made contributions to conception, design, and  statistical data analysis. Gave final approval of the version to be published.

Ernesto Chavez: Made contribution to analysis and interpretation of data. Gave final approval of the version to be published.

Erica Macedo: Made contribution to acquisition of data. Gave final approval of the version to be published.

Cintia Mattoso: Made contribution to acquisition of data. Gave final approval of the version to be published.

Roberta Lima: Made contribution to acquisition of  data. Gave final approval of the version to be published.

Juliana Vieira: Made contribution to analysis and interpretation of data. Gave final approval of the version to be published.

Cristiane Lamas: Made contribution to analysis and  interpretation  of data, as well as manuscript writing. Gave final approval of the version to be published.

Clara Weksler: Made contribution to analysis and interpretation of data. Gave final approval of the version to be published.

Acknowledgement and funding: We thank our clinical colleagues and nursing staff for their good care of our patients at Instituto Nacional de Cardiologia.