2 Privolzhsky Research Medical University of the Ministry of Health of the Russian Federation, Nizhny Novgorod, Russia

Objective:  Identify the most effective and safe method of transcatheter hepatic artery chemoembolization (TACE) in patients with primary liver cancer.

Methods:  Overall, 139 patients, who underwent 558 TACE procedures were included in the study. Gender in the group of patients was distributed approximately equally and amounted to 72 men (52%) and 67 women (48%), the average age was 57.8 (9.9) years (range from 23 to 92 years). In most patients, the underlying disease for the development of hepatocellular carcinoma was cirrhosis of the liver in the outcome of hepatitis C or B. Characteristics of liver tumors were examined by magnetic resonance imaging or computed tomography and ultrasound. For verification of the diagnosis, a percutaneous liver biopsy was performed under ultrasound guidance, and the level of alpha-fetoprotein was also determined. All patients were considered unresectable due to cirrhosis and / or local spread of the tumor. Chemoembolization was performed by following scheme: one procedure in 2 months, not less than 3 procedures.

Doxorubicin was used for chemotherapy. As a carrier of chemotherapy, Lipiodol (Guerbet, France) or saturable Hepaspheres (Merit Medical, USA) were used. Each patient received from 3 to 13 procedures.

Results: Postembolization syndrome occurred in all cases, but was effectively treated. One patient died due to acute liver failure with the borderline stage of the disease according to the BCLC classification (EASL 2012) and the multinodular form of HCC. There were no serious complications in the treatment process. In two patients in the area of the puncture of the femoral artery, pseudoaneurysm was formed, which was eliminated by compression under ultrasound guidance. About 10% of patients developed subacute cholecystitis in the postoperative period and were associated with non-targeted chemoembolization in the cystic artery. In all patients, the symptoms of cholecystitis at the time of discharge were relieved  conservatively.

Survival median – 19 months. Dynamics of tumors was assessed by RECIST criteria. In the group of patients with hepatocellular carcinoma after first 3 TAСEs partial response and stabilization were observed in 83%, progression in 17%. In 18 cases (13%), histologically proved tumor necrosis after TAСE was achieved, without progression during follow-up.  Three patients after reducing of tumor size was resected, 32 patients continue treatment.

The “gold” standard in the treatment of patients with hepatic malignancies are liver resection, as well as systemic chemotherapy aimed at eliminating or reducing the extent of the hepatic pathological process and achieving an operable state (1-3). Surgical treatment of hepatocellular carcinoma (HCC) is associated with long-term survival (3-6). However, radical management is possible only in 5-15% of patients in case of confirmed diagnosis of HCC (7-9).

Radical treatment in poor hepatic function, bilobar spreading of the process, extrahepatic metastasis with HCC is possible only in 10-30% of cases (6, 10). Postoperative mortality is less than 3% in patients without cirrhosis and 7–25% in patients with cirrhosis (3). Relapse of the primary tumor within 3-5 years after liver resection is observed in 70-90% of patients, of which repeated resection can be performed in less than 10% (4).

Systemic chemotherapy and radiation for hepatic neoplasia are ineffective, even when using combinations of several drugs (4, 11-13). Attempts to find more effective, minimally invasive methods of therapy motivated the development of intravascular interventions under fluoroscopic control.

Modern therapeutic endovascular interventions for unresectable HCC include hepatic arterial infusion of chemicals, transcatheter arterial chemoembolization of saturable microspheres (TACE), hepatic artery oil chemoembolization and radioembolization (14-21). At present, with HCC, TACE is more often used with the use of drug-saturated microparticles with high absorbing ability and long, slow, dosed release of chemotherapy, which allows delivering drugs to the tumor node in high concentration and ensuring their long-term effect directly on the affected area without systemic toxic effect (22-25). The saturation of the microspheres with a cytostatic is performed immediately before their administration. The compound remains stable longer than the oil emboli: the half-life of the dose from the liver is from 6 to 72 days. The most commonly used cytostatics are doxorubicin, epirubicin and other drugs. Monitoring the effectiveness of treatment is carried out using regular ultrasound (US), multi-detector computed tomography (MDCT) and magnetic-resonance imaging (MRI), as well as monitoring the level of alpha-fetoprotein (AFP). TACE cycles are repeated every 2-3 months.

The nature of the blood supply to primary liver cancer affects the effectiveness of TACE. The HCC is characterized by pronounced hypervascularization of the lesion with a large number of chaotic, histologically altered vessels with multiple arteriovenous shunts (26).

According to Shpak et al. (23), in the hypervascular type of HCC, the arterial type of blood supply predominates, with potent visualization of the tumor vessels and reaching a maximum concentration of contrast medium in the range from the late arterial to late portal phase with its subsequent leaching (27, 28).

Randomized study of Lammer et al. (29) was devoted to compare the efficacy of drug-eluting bead TACE (DEB-TACE) and conventional TACE (cTACE) with doxorubicin. The results of treatment of a large group (n=212) of patients with HCC were studied. A complete response, a partial response, and stabilization were observed more often in the DEB-TACE group (27%, 52%, and 63%, respectively) than in the group with cTACE (22%, 44%, and 52%, respectively). DEB-TACE showed significantly fewer complications (especially due to systemic toxicity of doxorubicin), in comparison with conventional HEPA (28).

Malenstein et al. (27), in turn, showed greater efficacy of the conventional TACE technique compared to DEB-TACE (HepaSphereTM saturated with doxorubicin) in the treatment of unresectable HCC. The response to treatment of 30 patients according to RECIST criteria in the DEB-TACE and cTACE groups was observed in 77% and 92% of cases, progression in 23% and 8%, respectively (the difference was not statistically significant).

Thus, to date, sufficient experience has been accumulated on the use of various endovascular approaches in the treatment of malignant liver lesions. Endovascular chemoembolization of the hepatic arteries is an option for the treatment of patients with inoperable tumors of the liver due to its high efficiency and relative safety, allowing to achieve stabilization or regression of the process. The long-term effect of chemoembolization is due to the implementation of three main treatment mechanisms: the creation of a locally high concentration of the drug with its selective administration, the long-term presence of the chemotherapy drug in the focus, and the induction of ischemic tumor necrosis. The use of microspheres is slightly more effective than classical oil chemoembolization; however, further accumulation of experience is required to determine the indications for each method.

Purpose of the study was to determine the efficacy and safety of TACE in patients with hepatocellular carcinoma.

The study included 139 patients who underwent 558 hepatic chemoembolization procedures. According to the results of MRI or MDCT, as well as ultrasound, the characteristics of foci in the liver were studied. Chemoembolization was carried out according to the scheme: one procedure in 2 months, but no less than three procedures. Upon receipt of a positive response to treatment, the intervals between TACE increased to 3-6 months. At the beginning of TACE, all patients were found to be unresectable. The chemotherapy with doxorubicin was used, during one procedure; 25 to 100 mg of the drug was administered. Saturated hepatospheres (Merit Medical, USA) or Lipiodol (Guerbet, France) were used as a chemotherapy drug carrier. Depending on the carrier used, the group of patients was divided into two subgroups.

The study group consisted of 139 patients with HCC, of which 72 men and 67 women, the average age was 57.8 (9.9) years (range from 23 to 92 years). An angiographic feature of patients in this group was the presence of hypervascularization of tumor nodes along the entire perimeter (Fig. 1). Hepaspheres were used as carriers in 97 patients (70%), Lipiodol in 42 (30%) patients. Each patient underwent from 3 to 13 procedures.

During the current hospitalization, 1 death was recorded due to acute liver failure in a patient with a terminal stage of the disease according to the BCLC classification (EASL 2012) and a multinodular form of HCC. There were no serious complications during the treatment. Two patients in the area of ​​the puncture formed a false aneurysm, which was eliminated by compression under ultrasound control. Postembolization syndrome, noted in all patients, was relieved pharmacologically. Approximately 10% of patients showed signs of subacute cholecystitis in the postoperative period and were associated with improper administration of chemoemboli into the artery. In all patients, signs of cholecystitis at the time of discharge were relieved conservatively.

The dynamics of disease was evaluated according to the RECIST criteria. Median survival was 19 months.

In the subgroup with Lipiodol, after three courses, a partial response and stabilization were observed in 60%, progression in 40%, and in the subgroup with hepaspheres in 83% and 17%, respectively (Fig. 2). In 18 (13%) patients, tumor necrosis after TACE was histologically confirmed, with the lack of disease progression during dynamic observation. After reducing the size of the lesion, three patients underwent liver resection, 32 patients continuing treatment. 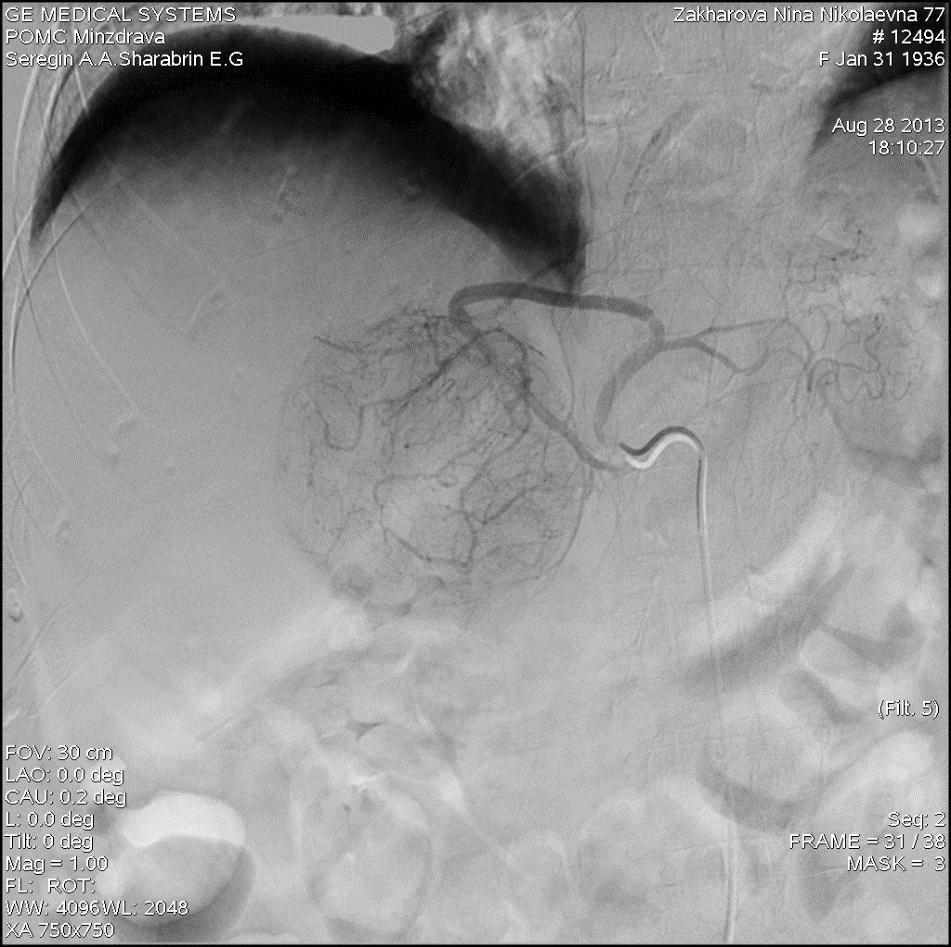 Figure 1. Angiogram of aberrant left hepatic artery from the left gastric artery of a 76 years old patient Z. with hepatocellular carcinoma. A hypervascular node is visualized in the left lobe of the liver. 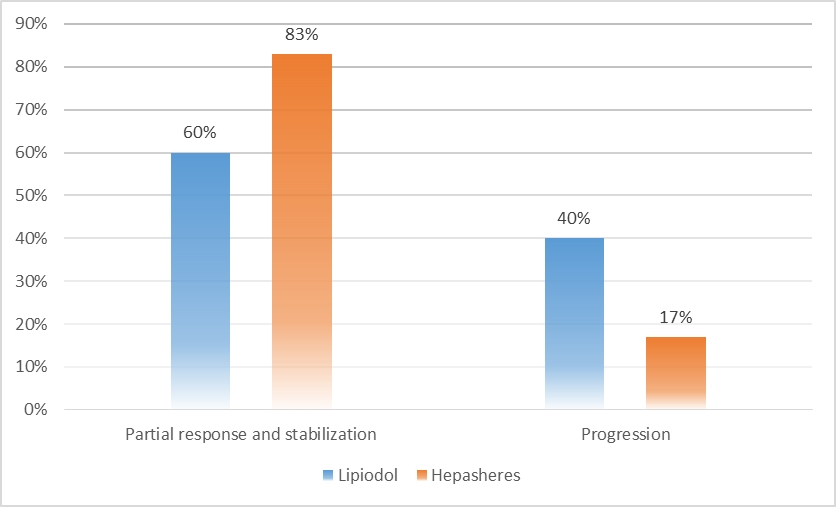 During intra-arterial infusion of a suspension of microparticles (hepaspheres), it was noted that in the hepatocellular carcinoma the microparticles were distributed evenly in the central and peripheral zones of the tumor (Fig. 3). 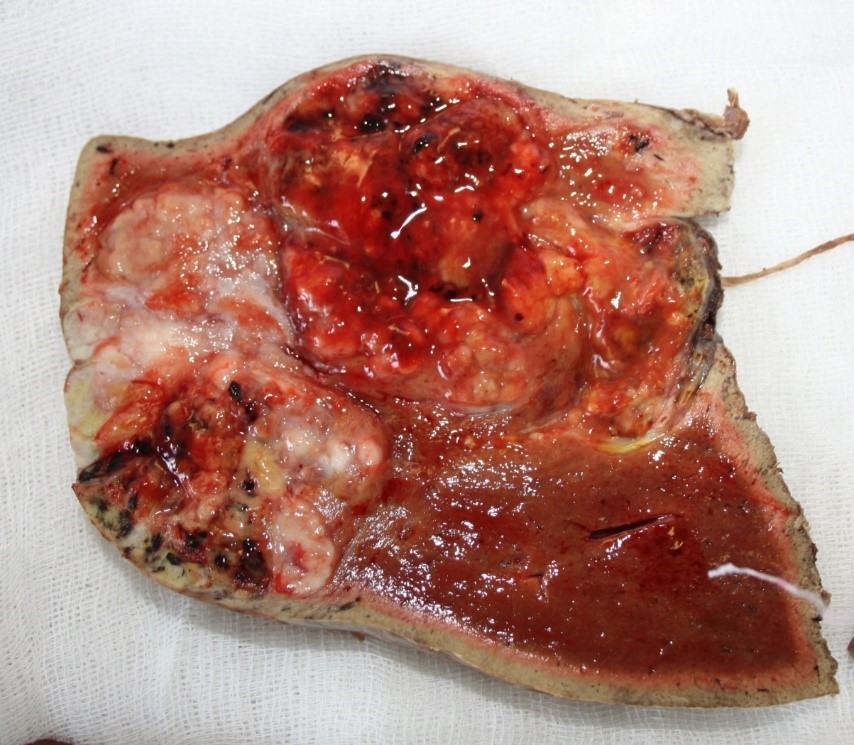 Figure 3. Macrospecimen. Uniform distribution of microparticles in the tissue of hepatocellular carcinoma in the form of multiple black foci in the central and peripheral zones of the tumor. 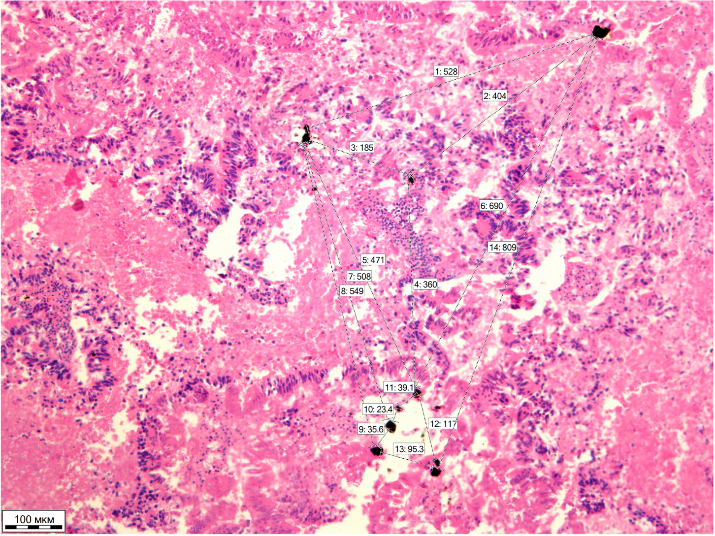 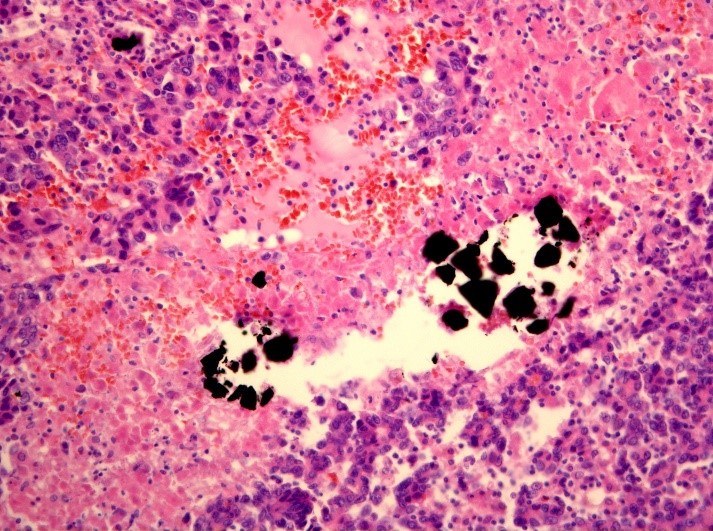 Figure 4. The micropreparation. Uniform distribution of labeled microparticles in the tissue of hepatocellular carcinoma: a) x100 magnification; b) x200 magnification. Hematoxylin and eosin stain.

Hepaspheres have shown great effectiveness in the treatment of hepatocellular carcinoma, a partial response and stabilization of the process were obtained in 83% of patients during the first six months. Disease progression was observed in 17% of patients.

Chemoembolization with Lipiodol showed good penetration of the drug into the tumor tissue; however, in this subgroup of patients, only 60% of patients received a partial response and stabilization of the process and a higher rate of disease progression during the first six months of treatment.

The study showed the need to use more courses of chemoembolization of the hepatic artery with the predominant use of drug-saturated hepaspheres in the treatment of hepatocellular carcinoma.

Chemoembolization of the hepatic artery in the treatment of hepatocellular carcinoma is the method of choice for unresectable tumors with cirrhosis. TACE has shown high efficiency and safety of the method, with minimal risks of complications.