Cystic adventitial disease (CAD) is a very rare vascular disorder with prevalence as low as 1:1000 of all vascular pathologies (1). This disease most frequently occurs in young or middle-aged male patients with male/female ratio of 5/1 (1). CAD causes cystic degeneration of peripheral arteries; however, rarely, veins can also be involved (2). Although the most frequently detected location of CAD is the popliteal artery (usually unilateral), any peripheral artery adjacent to the joint can be affected (3). As a result, luminal narrowing or even occlusion may develop due to external compression presenting clinically as intermittent claudication. Pathologic findings of CAD include intramural cysts containing gelatinous material located between the media and the adventitia. Histopathologic examinations report contents of fibrinogen, hyaluronic acid, hydroxyproline, or mucin within the cyst (3).

The etiology of CAD is unclear. Several hypotheses including developmental, ganglionic, microtraumatic and degenerative causes have been proposed (4). The developmental hypothesis (the most widely accepted) suggests that the adventitia of affected arteries contains undifferentiated mesenchymal cells, which do not migrate to the joints and secretes mucoid material into the vessel wall. The ganglion hypothesis proposes that adventitial cysts are composed of ectopic synovial ganglions, which migrated from the adjacent joint capsule into the adventitia. The microtraumatic theory suggests that continuous movement of adjacent joints causes repetitive trauma to the vessels. The degenerative etiology suggests that myxomatous systemic degeneration from a generalized disorder causes cystic formation.

Digital subtraction angiography has been considered the gold standard for detection of CAD; however, color Doppler ultrasound, computed tomography angiography (CTA), and magnetic resonance angiography (MRA) have been proven to be useful diagnostic tools (5, 6).

Color Doppler ultrasound allows detecting an arterial stenosis or occlusion with surrounding cyst(s), which contain no flow and appear as anechoic or hypoechoic masses in the wall of the vessel.

Cysts are hyperintense on T2-weighted magnetic resonance images (MRI) and have variable signal intensity on T1-weighted images because of the variable amount of mucoid material within the cysts (Fig. 3). Compression of the popliteal artery produced by cysts can be seen on axial MRI (Fig. 3) and MRA with three-dimensional “time-of-flight” imaging as “scimitar sign” (Fig. 4). 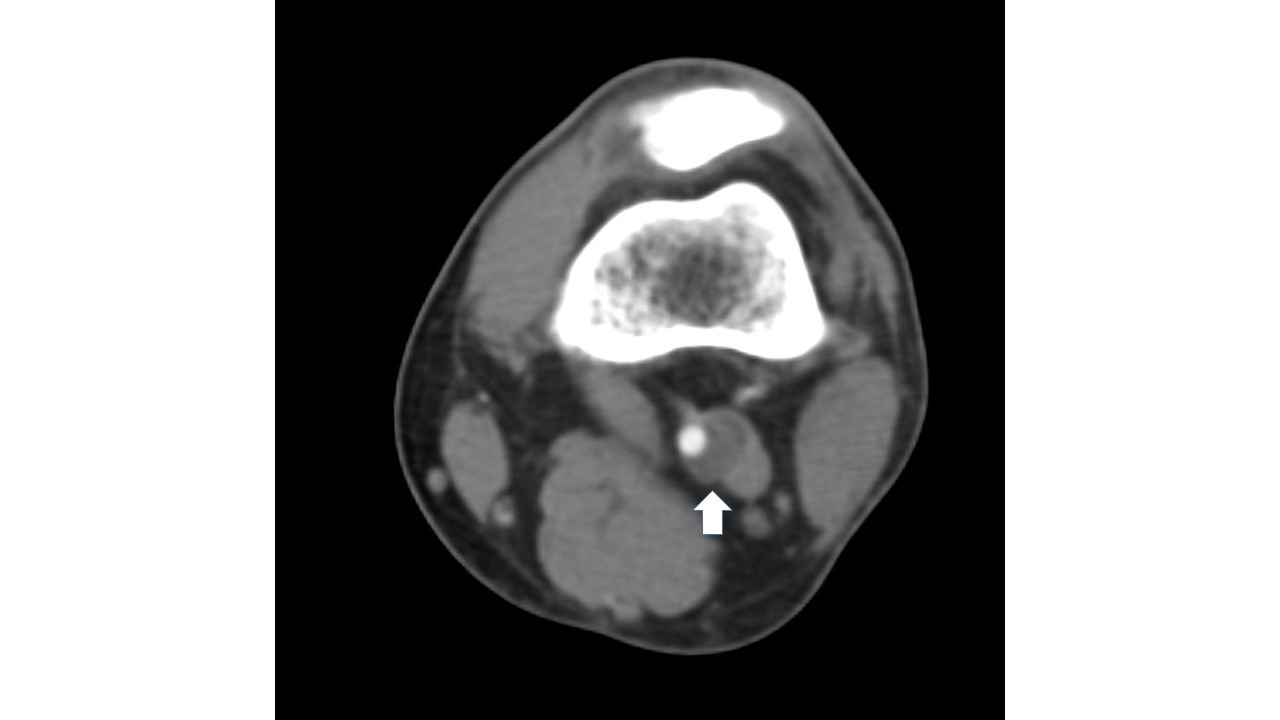 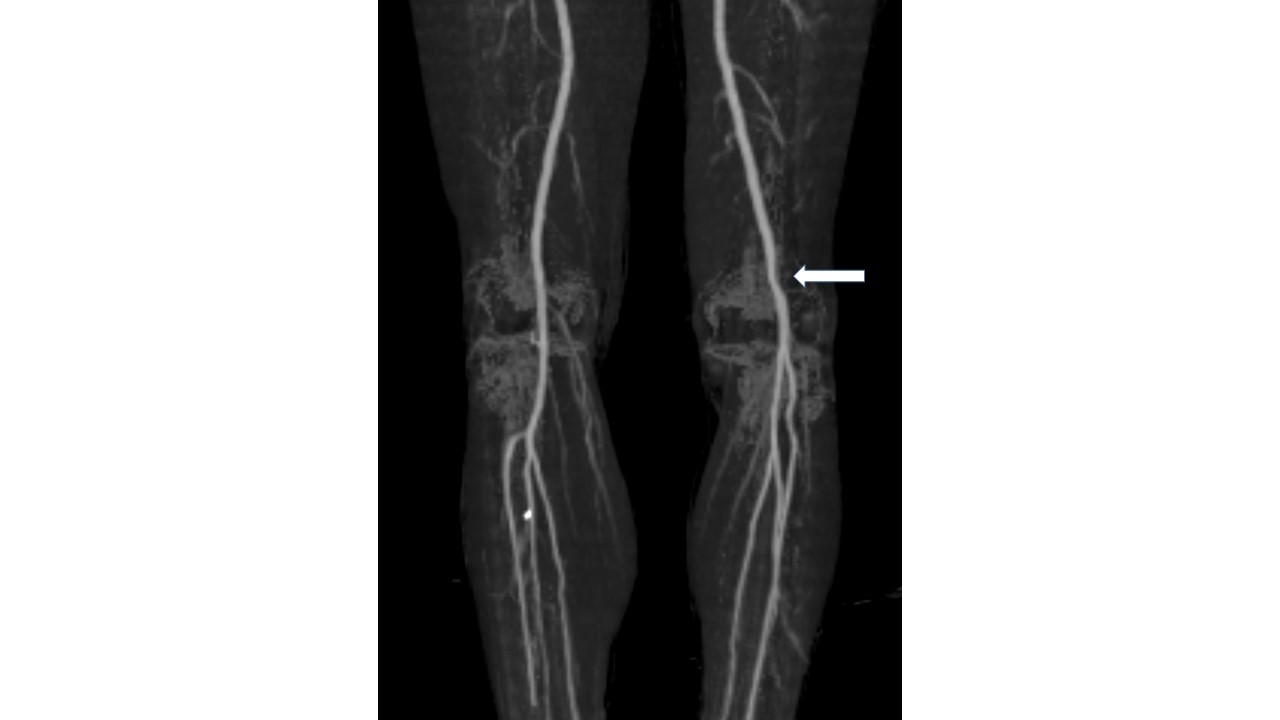 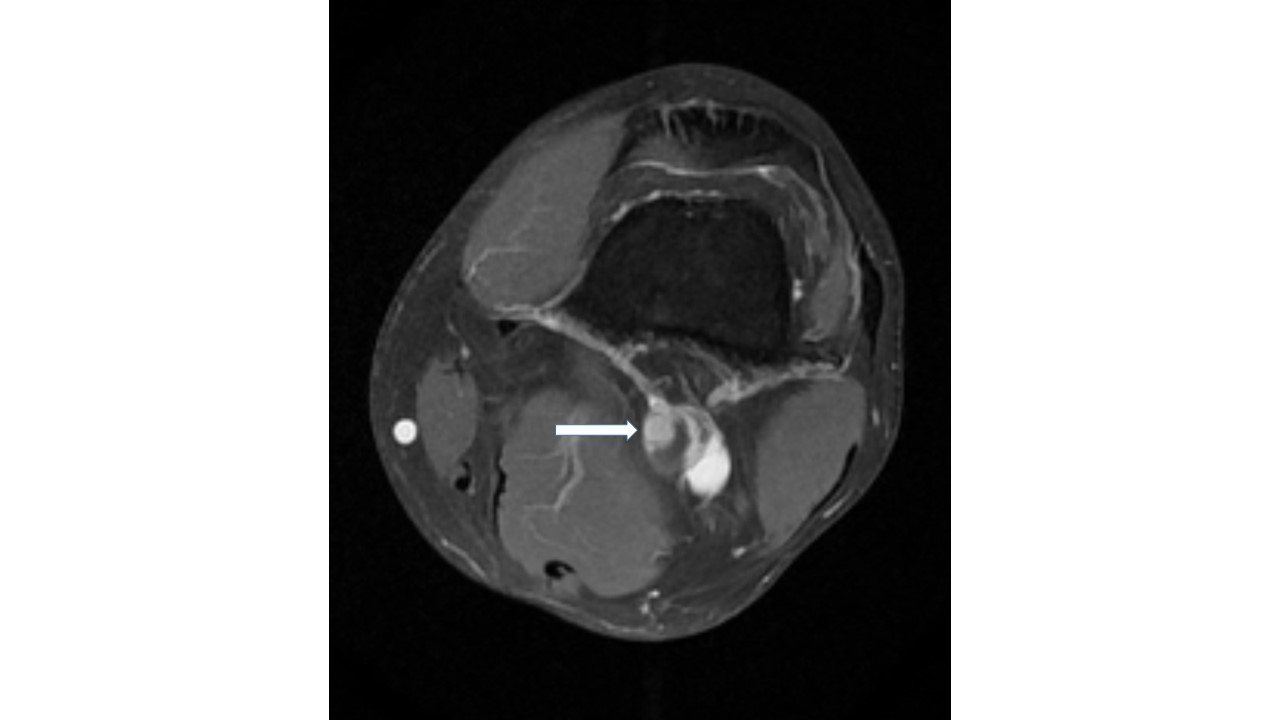 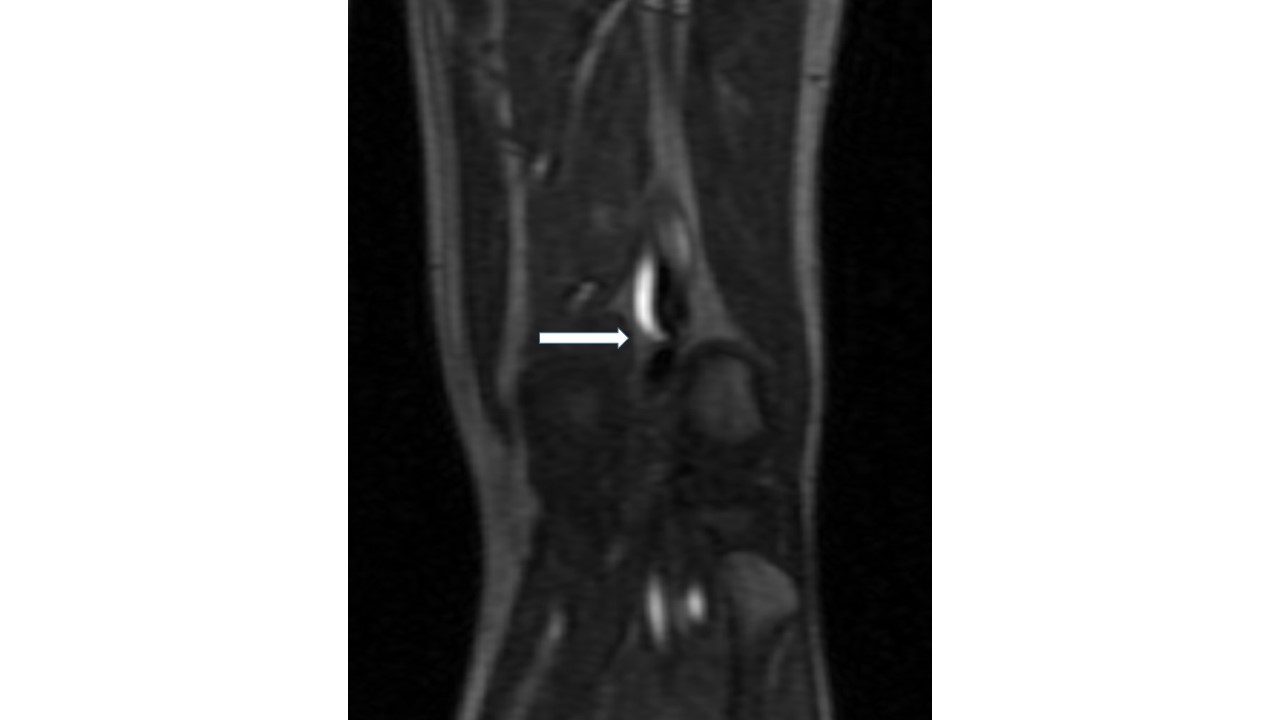 Figure 4. Magnetic resonance angiography of the same patient demonstrates mild lumen narrowing (arrow) of the popliteal artery due to the compression by the cyst from vascular wall

Management of CAD should be based on patient’s clinical symptoms and radiologic findings. A conservative periodic observation is recommended for asymptomatic patients because spontaneous resolution of cystic lesions was reported (7). Percutaneous aspiration under ultrasound guidance may be performed; however, the cysts recurrence may occur (8). Percutaneous endovascular treatments such as balloon angioplasty and stent placement are often unsuccessful due to dense viscosity of the gelatinous cystic content (9). In cases of total occlusion, surgical treatment with resection and bypass is preferred, while excision of the cyst is preferred for artery stenosis (10).

In conclusion, cystic adventitial disease is a very rare vascular disorder that most frequently occurs in young or middle-aged male patients. In younger patients and in those without extensive atherosclerosis, the differential diagnosis of this disease must include also atherosclerosis, a pressure by neighboring muscles (so-called entrapment syndrome), aneurysm or cyst. Radiologic methods, especially cross-sectional magnetic resonance imaging and MRA, are important imaging tools for proper diagnosis and selecting the most appropriate treatment method. 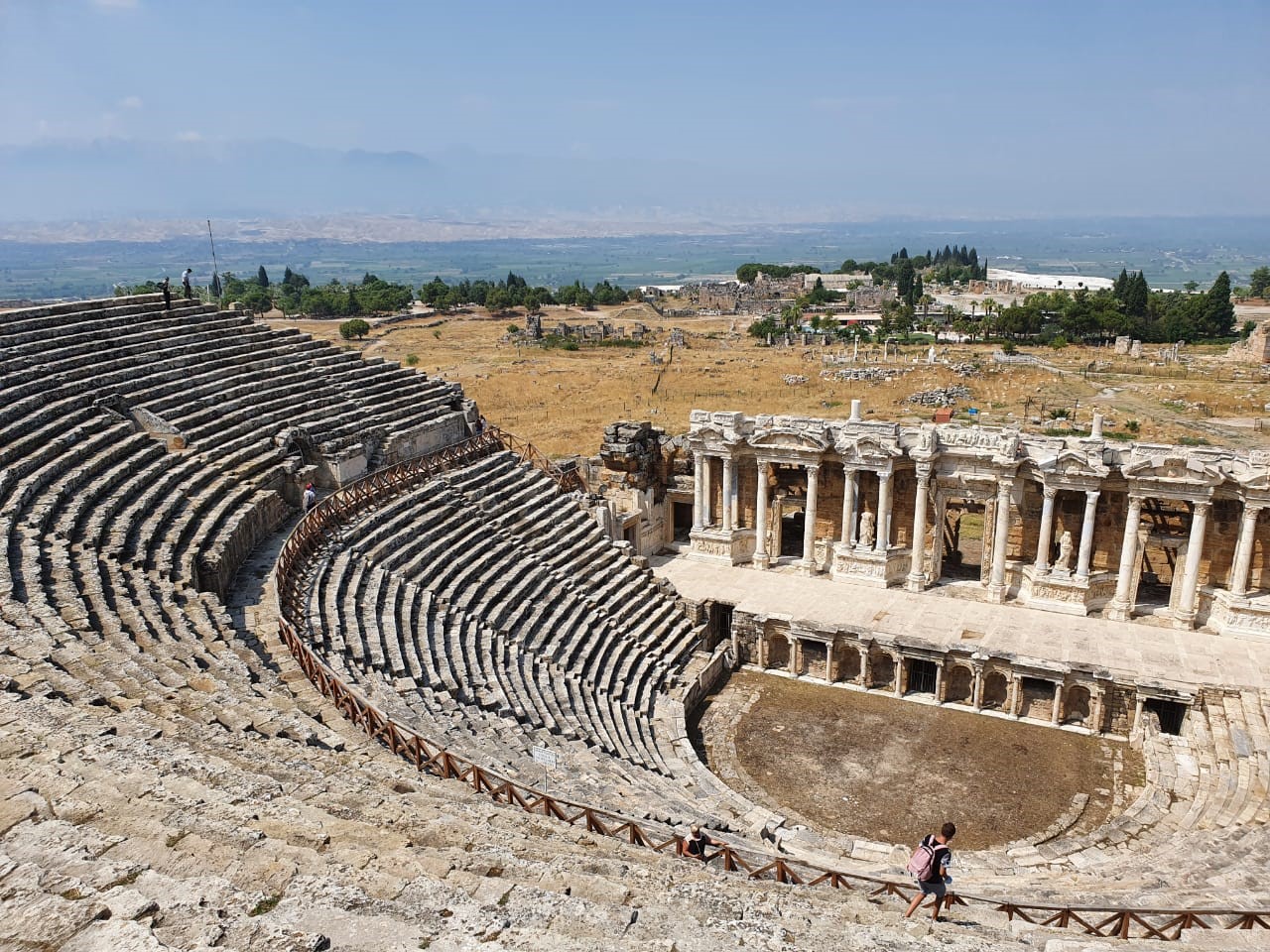